I’ve always been sad that AlphaGo Teach hasn’t seen more enthusiasm around the (English-speaking?) go world. Sure, the tiny board and the disability to add your own variations may be frustrating… but it’s such a fascinating resource of weird, insane, yet even positions.

For this reason, I’ve taken it upon myself to catalogue AGT’s whole-board joseki on OGS demo boards (with downloadable .sgf). Now you don’t need a magnifying glass — and you can add your own variations! (If you can handle the lag… lol.)

This should be 99 % complete (I’ve probably missed a variation here or there).

The vast majority of AGT’s database consists of those board positions it considers even (meaning most of them have white up by 52 — 60 %). Yet most of the variations look at least partially insane from a human standpoint. It seems that to AlphaGo, by far the highest virtue in go is “light”, “flexible” play (or, from my humble 12k perspective, “loose” and “overplay”). Most positions look unresolved; both sides mainly seem interested in creating aji for later. Is it just confirmation bias, or does it feel like black especially has to try some incredibly adventurous stuff in order to compensate for komi?

If you can handle the lag…

Never mind the lag, by browser can’t load this demo at all! 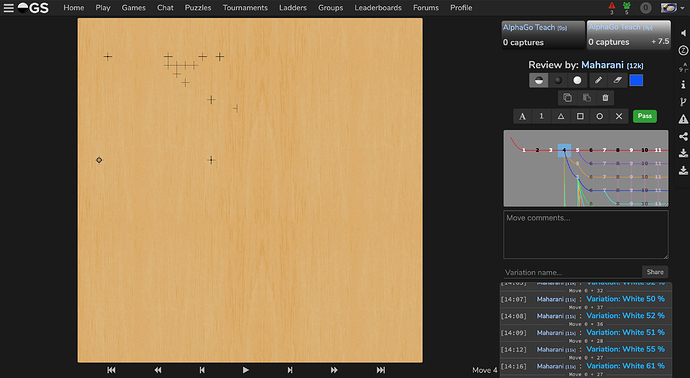 related to this maybe

Blank board in Analyze Mode Support

When I enter Analyze Mode the board goes blank and stays blank even if I exit Analyze Mode. This never happened to me before. Just discovered it today as I woke up this morning. Using Chrome for Android. I’ll check my desktop when I get home from work.

I think it’s all happening because Anoek is out of town. If he isn’t stting at his desk, the gremlins come out to play…

AlphaGo Teach was interesting when it came out, but iirc it wasn’t long 'till we had the first instance of Leela that essentially rendered it obsolete. As now not only could we look at the variations and %s, but we could play around with variations and watch as more playouts got added into it.

The one benefit then is that it was browser-based, but now we have AI tools like zbaduk that allow us to essentually use LZ in the browser anyway.

I’m getting a weird graphical glitch as well. Tried refreshing, but it still persists.

The backwards-L shaped, semi-transparent artifacts are left behind as a trail following my mouse pointer as I drag it across the board.

The SGF-file itself seems fine, and I am able to view it on another SGF editor:
https://yewang.github.io/besogo/testing.html?sgf=https://online-go.com/api/v1/reviews/412363/sgf
Note: it may take a few seconds to load since it has a very large game tree that has to be built.

By the way, how are you cataloging this? It appears that you put in a lot of work by manually adding variations by hand.

The entire SGF file for the AlphaGo Teach book is available here:
https://alphagoteach.deepmind.com/dist/files/book.sgf

Lol I had no idea it was available. I did just put them in by hand. Guess that was pointless

Guess that was pointless

Well, more time certainly… But relaying them all probably had more personal benefit than simply importing an sgf

Lol I had no idea it was available.

Well, I don’t think they meant for the SGF file to be directly downloaded, however they did not really make it that hard to find and download.

I don’t think there is a direct link to it from anywhere on the website, and it would seem that they intended people to just interact with the opening book via the web interface.

I’m not sure about that.

Loading that page didn’t make my memory consumption blip at all in the activity monitor.

There was a burst of CPU going on with “Chrome renderer”, but that’s all.

Those visual glitches are from insufficient memory.

It’s not the memory. Firefox and Chromium both are using about 10% RAM when I open the demo board, but only Chromium has the rendering issues (on Desktop).

It is not an insufficient memory issue on my machines.

I see similar graphical glitches on two different machines. Both of them are running Linux and Firefox.

These two machines have 16 GB and 32 GB of RAM, only a small fraction (less than a quarter) of which was utilized (across all processes) during which these glitches occurred. The problem seems to be persistent, and hence easily reproducible.

Let me know if you want me to do additional troubleshooting, if it might be of interest to the developers.

I added some optimizations that should help with loading and viewing this.

There is a separate issue with graphical glitches, I think Chrome is breaking things with their canvas again.

does it feel like black especially has to try some incredibly adventurous stuff in order to compensate for komi?

The current setting of komi is probably too big at 6.5; it should probably be 6.0. With integer komi, some small percentage of games would end as draws, which some Go players don’t like.
A draw is a perfectly sensible result if both players play equally well. Other games (chess, for example) have a much higher percentage of drawn games than Go would ever have, and still managed to run decent tournaments for the whole of the 20th century. For example in the famous Linares 1998 chess tournament, over half of the 84 games played were drawn. In Go, with integer komi, probably less than 5% of pro games would be drawn. Between amateurs the percentage would be even less. How many of your games were decided by half a point?

I plugged AlphaGo Teach’s favourite starting position into KataGo (courtesy of ZBaduk) and continued the game to the end. Might do the same for other AGT positions in the future.

4 Likes
Correct way to use AI for Learning
next page →