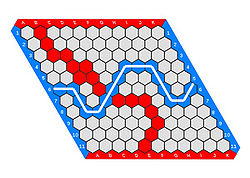 Hex is a strategy board game for two players played on a hexagonal grid, theoretically of any size and several possible shapes, but traditionally as an 11×11 rhombus. Players alternate placing markers or stones on unoccupied spaces in an attempt to link their opposite sides of the board in an unbroken chain. One player must win; there are no draws. The game has deep strategy, sharp tactics and a profound mathematical underpinning related to the Brouwer fixed-point theorem. It was invented in th...

Anyone already play and/or interested in playing some? Found it in this post and tried it out on the first version I could find online. Immediately I noticed the similarities to Go, namely in reasoning about connection and miai. Though what looks like a hane seems to be a universally bad move…

Anyway, seems like fun! I wonder if there are any online servers?

I’ve never played, but heard of it.

Gonnect is a strategy board game for two players invented by João Pedro Neto in 2000. The game is played with standard Go equipment (usually on a 13×13 or 15×15 board) and basically uses the same rules as Go, however the goal of the game is to construct a group that connects any two opposite sides. Seen from a superficial point of view, Gonnect belongs to the family of connection games with relatives Hex and Havannah; however, the game mutates into a game of territory (like Go) when played by adv...

Fuseques made a server for it (or maybe a very similar game/variation?) a while ago. He is pretty good at it.

Interesting, because when I played Go for the first days/weeks, I developed this idea that I couldn’t possibly lose if only I managed to create a group that connected to all four sides.

You also definitely should try this:

It’s a flash game, so some browser could bother opening that page, but the game is very similar to hex ad it’s super-pleasing when you can shut that beast in a dead end!

Wish I could hear it meaow!

It’s here for the record! Looks like the hosted version is down though. I’ll run the code and see about getting a version online if it works

@Fuseques if you have any advice let me know

Fun! A little easy though.

I haven’t won one game, seems pretty dependent on the initial configuration. Is it even possible to win every time? I’m not thinking so but I guess I’m an idiot.

Yeah I just ran the code and found that out lol

It helps to have played a little of the real hex first, so you figure out how connections work, etc. Not sure if it’s possible to win every time!

Shape is a concept in hex as much as go: https://en.wikipedia.org/wiki/Hex_(board_game)#/media/File:Hex_situation_bridge.svg

It makes me wanna try Hex, and also makes me think of the game “Hive”, sort of boardless chess-like game with insect hex tiles, I just discovered it, it’s really fun and addictive

maybe not as complex than chess, but to me definitely more fun :

I didn’t find some free server like ogs to play it (please ogs developpers, implement it here! ^^ )

There is a Hex section on www.playok.com thats unfortunately almost deserted now. www.littlegolem.net is a correspondence server with multiple games that has many strong hex players.

Very hard to catch a strategy and maybe that’s the interesting part, maybe? But it also can be the boring part since you don’t know why you are winning… or losing.
But, there’s like a turning point where you realize you only know the winner whatever one does.

I haven’t won one game,

You’ll be able in the end to catch that cat many times in a row.

My advice is: “play large moves”!

Or else: “don’t attach when attacking” and “use contact moves for defence”.

Would anyone like to try a game of Gonnect?

It does not require any special server to play. In fact, we could just play here on OGS, since the mechanics are the same as Go, just the winning condition is different (we would have to ignore scoring and just declare the winner based on the connectivity).

Like Hex, Gonnect also cannot end in a tie. However, since it is possible for connectivity to be mutually blocked in regular go positions, the tie breaking mechanism is that players cannot pass. Hence, one player must eventually have to fill in enough eye space to break a deadlock (and hence why making territory is important in high-level play).

But, there’s like a turning point where you realize you only know the winner whatever one does.

I’ve noticed this too. Once you basically have bridges from one end to the other the game is resignable. But I’m usually surprised by whoever wins…

Would anyone like to try a game of Gonnect?

I’d be interested in a correspondence challenge if you want!

Great! Just sent you a challenge