As a beginner (and not all too smart) I got a bit confused by the “minimum ranking” and “maximum ranking” options when creating a game. I understand now that minimum ranking means the highest number (i.e. the weakest posible player) for instance 20k and maximum ranking means the lowest number (i.e. the stronger player), for instance 17k. Because I am a bit dim, I created a few games the other way around: minimum: 17k, maximum: 20k. In effect, this means that I actually played against players of 17k or better (e.g…, 11k) which is pretty pointless because after 5 or 6 moves I might as well resign since I have no idea what’s going on. Maybe the developers of the application could make it more fool-proof so it’s not possible to set the minimum/maximum levels the wrong way around?

make it more fool-proof so it’s not possible to set the minimum/maximum levels the wrong way around?

It should not be possible? At least not on any of my devices… Can you confirm or screencast for me if at all possible? What device are you on? Or are you by any chance using an android app?

The confusion kind of comes from the fact that in kyu ranks the numbers are reversed - that is higher the number the lower the rank, but it is the traditional and widely accepted way

It should not be possible?

Note: All done from PC/chrome.

You’re right. When you actually click on either boxes, it automatically corrects if “minimum” is a lower number than “maximum”. But if you don’t click on either of them, by default, you can get the situation as shown in the image (I hope it uploaded correctly). And starting from the default situation, you have to set both min and max before this auto-correction sets in. So, it looks like a bug to me 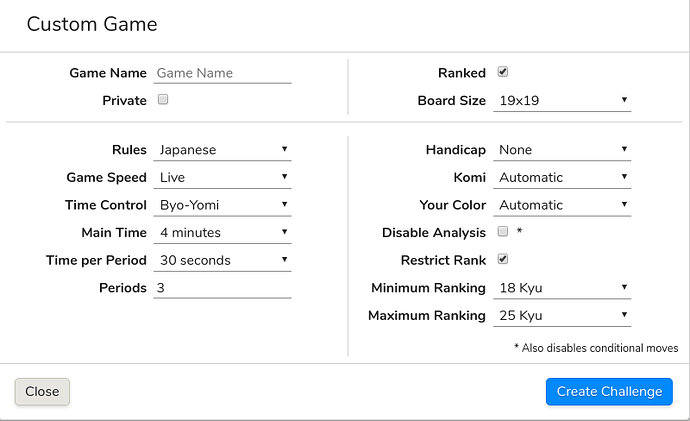 But if you don’t click on either of them, by default, you can get the situation as shown in the image

But, the default is just your last used setting, which means you managed to change it to this in some other way previously…

Indeed, you are right. After some clicking I was able to reproduce.
Thanks for the catch and the follow-up, I will file a bug reprot

For reference (sorry for the random language settings

True.
I would add that the “min” value is on top and the “max” one is on bottom. This also can be confusing toghether with the previous statement.

@alasala: Don’t feel bad. You are not alone. Others have been confused by this and commented on it here more than a year ago (but I’m too lazy to hunt down the thread).

I posted that as a reply to the OP. Why doesn’t it show up that way?

I posted that as a reply to the OP. Why doesn’t it show up that way?

I’ve had the same issue come up a few times, that’s why I now consistently quote anything I reply to directly.

Good advice. I’ve had it happen several times randomly, and always go back to edit in an @ to the person.

You’re not the only one who is confused; I realize that I have been doing it wrong all the time as well.
I like the suggestion to rephrase it to “strongest ranking” and “weakest ranking”, which is less ambiguous.

This may also shed some light on another topic. There are times when the list of “Long games” is very long, but I “Can’t accept” any of them, despite that there are many players that have exactly my ranking. I always wondered why this is. Could it be that many players are confused, end up selecting the wrong rank interval, and exclude in fact the players that they want to play?

Well I think people’s egos should have to be able to stomach “weakest” and “strongest” in a drop-down menu.
But for the frail of heart, some feel-good euphemisms could be