I find learning Joseki very difficult because there will be no book or resource explaining every possible step in the Joseki tree - I understand it is physically impossible due to the vast amount of variations. Most would give the Joseki - “correct” one - but, what if the opponent does not follow the pattern? What is the best punishment? How to deal with trick move?

I found the most inclusive website to be “josekipedia”. OGS has more friendly interface - as always - but content wise is much smaller a library. Sensei’s library has vast information but the user interface is very confusing to say the least. I just cannot use the website for systematic study.

Still, I cannot find answers to some moves I could think of, or have been tricked with, within a particular Joseki tree on josekipedia, even with the huge amount of knowledge in that library. I cannot figure out the answer myself and am forever confused.

Could you please share some light? Many thanks and really appreciated.

Not directly on topic, but I hope it’s OK to note that this is deliberate - OGS Joseki has a mission to have only high quality, well sourced and credible joseki. Josekipedia suffers from almost too much: how do you know that what you are looking at is even correct let alone current.

I don’t think that looking in a dictionary for the answers to non-Joseki sequences is ever going to be a feasible thing. For the reason that makes Go the game it is: there are just too many! There is no way every wrong move could be catalogued with a best response, and even if you could, there is no way a person could remember all those.

I believe the way to approach non-Joseki responses is the same as any other play: analyse the position and read or guess what might be best for you.

The difference with a move that you know to be non-Joseki, compared to any other situation, is simply that you know for sure that the move your opponent made is not considered ideal, so you have a more solid indication than in usual play that it’s worth looking for punishment. Often “your opponents move is your best move” can be one indication: if they didn’t play the Joseki move, is that move now your best? That’s just one approach.

Looking for a “set of answers to Joseki mistakes” as I said is probably not the right way to think about it.

You are very welcome to ask questions here about particular mistake scenarios and how would people respond, and about “why is this sequence even considered ideal”. Though be aware that Joseki used to come from Pro play, which is hard to understand the rationale often, and now come from AI play, which is even harder. So sometimes the answer is “because AI said so, we can only rationalise”.

Another thing to keep in mind is that not all mistakes need to be directly punished. Sometimes, simply playing out your side of the correct joseki can still be best, despite their stepping away from it. In such circumstances, the mistake can be seen in your opponent having either less territory, worse shape, or worse follow ups later on.

The mistake many kyus make is thinking that just because their opponent didn’t play joseki means that they need to launch an all out attack and try to kill / “punish” that mistake. Sometimes this is possible but often it is unrealistic.

The only resource I use is ps.waltheri.net, local search. Almost all pro games or AlphaGo, all taken from real play,

I tried once to write a book detailing the simplest joseki for use by 10k players… I got quite far but I had a bit of a breakdown and couldn’t continue it.

Right now I’m finding correspomdence interesting because, compared to live, there is more joseki deviation. I like being thrown back on my wits.

I agree with bugcat. Here’s a detailed way to use waltheri. 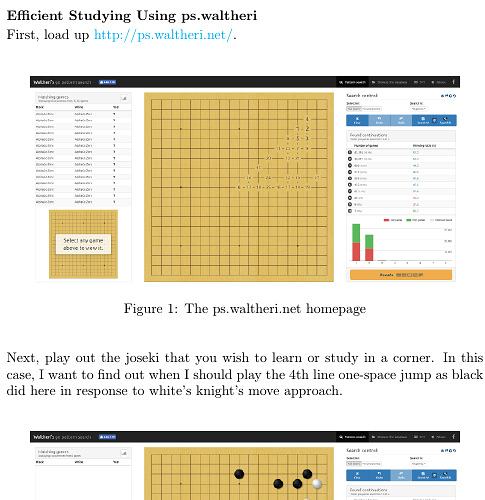 I have used Waltheri before, but many of the joseki I want to know are not there. Moreover, the application of joseki is related to the whole board. I suggest that the resource of joseki knowledge through AI analyses. You will be surprised to find that different AIs, even though they are not connected to each other, have almost the same answer.

Before the advent of so many AIs today, I used to rely on the data from the Alphago teaching tool and spent some time researching Master 60 games. But the only messages on the teaching tool are far from enough to cope with the actual situations, and the options not shown out on the teaching tool are not that bad so that they are unnecessary to be known. I think google company may not want to reveal too much to us? So back to the OGS, my opinion is that instead of building a jeseki database, it is better to build a opening database which is more complete than the Alphago teaching tool. The depth of variarions is only needed to be about 20 moves or so. But the options should be as detailed as possible.

I think were open to including fuseki in the OSG “Joseki Explorer”, even though it doesn’t fit the name

We have a “tag” for identifying them so they can be filtered and searched specifically.

If you would like to contribute, please let me know.

Keep in mind that the more you hand-hold and “do the work” for beginners/learners, the worse off they are. AI analysis has actually been hurting reviews. I’ve seen so many people stagnate in their rank because they no longer review and just look at whatever top 3 moves the AI says to do (which are often completly wrong).

We always recommend doing problems and not memorizing joseki or life and death problems for a reason.

I guess we supply tools for a reason.

Whether people use them wisely or not is up to them.

I just tried Joseki Explorer. For example, the fuseki when the first two moves of black and white are both two stars, the blacks next move has only one option of sanrensei. I guess it should still be in the early stages of construction. I used to analyze my own kifus by AI, some impressions are still left in my mind. But I can’t remember the exact win rates for each move, which I think are essential references for making choices.

So my point is: Is it possible, or are you willing to let AI do the work of populating the database in Joseki Explorer? After all, filling the options with human hands is not only more inefficient, but will be limited by the different strength of each person.

I 100% disagree that winrates are how you should choose the opening moves. I honestly could not even begin to describe how much I disagree with you on everything you wrote.

AI is only partially useful, where it gives you new options for moves that you never considered before (which is what you get when you get a review by a human any way), or for the few moves where a large mistake is not obvious to you.

So my point is: Is it possible, or are you willing to let AI do the work of populating the database in Joseki Explorer?

The extent to which, the situations in which, AI opinion should directly inform the Joseki Explorer has been a hot topic amongst the contributors.

I would welcome a wider discussion of that in a separate thread.

What I miss is the “rewrite”" of opening analysis under the scrutiny of AI eyes. Let’s take this wonderful “Relentless” book (free download in “other resources” tab). This book has deep studies on many aspects of modern opening stage. I would be interested to confront and discuss them with the new eyes of AI and see indeed how solid is all this.

In some way, books and articles which proposed opening patterns and theory are very welcomed candidates for a check and new contributions given by AI. Even if I could get enough material to do it myself, I like to read the works of others and let them make me think on my way to play.

Have you watched Yeonwoo’s Classic Games with AI series?

I think I’ve watched a couple but not that game.