Boredom Tesuji - how to respond

I´m talking about people who lose a game and then peep at every single unproblematic cut; try to make life on the second line inside my territory; or in the worst case: just playing 10 dead stones before finally passing.

I´m wondering what to do about it. One method I found is to just keep passing until the other player wins, to show them that what they do is not pratising an art, but infantile nonsense. But it doesn´t really satisfy me.

Looks like endgame trolling to me.
Report it to the mods.

PLEASE report these users to the mods. It’s very difficult to find all of them without reports and it is ASTOUNDING how many people don’t report this toxic behaviour…

Help us help you

I´m talking about people who lose a game and then peep at every single unproblematic cut;

I’m no moderator, but here’s my take on it.

If the game is still going, they have not officially lost. One may view it in the way that opponents loss is inevitable, but it’s important to remember that opponent may not see it the same way. If there is even a small chance that they could catch up, asking for resignation is rude in my opinion. One should keep playing until absolutely certain there is no chance that they’ll turn the game around. Only then is it ok to politely ask for resignation. Talking should be the first attempt - they might be new and need some guidance - unless one feels uncomfortable doing so of course. If verbal communication doesn’t help / makes it worse, then report to moderators.

Ok, I reported four players.
The problem is that it is often hard to judge what is reasonable and what is not, but let s see what comes from it.

(about blocking the by not playing; it´s hard to remember all of them.)

Just report and let the mods decide what is reasonable or not.
As time goes by you will develop a feeling what is (not) reasonable.

(about blocking the by not playing; it´s hard to remember all of them.)

Right, I could see this being a useful feature in the future, but as far as I know there is no way to do this at the moment. But I could be wrong. 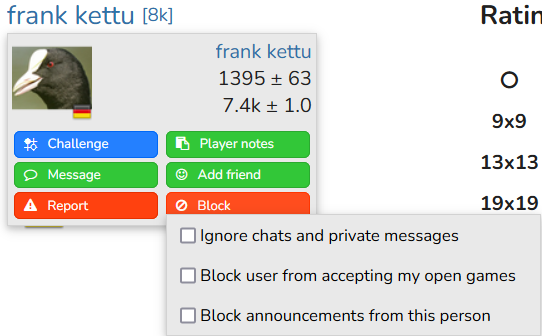 Maybe you can try the bloack user from accepting open games option.

There’s also an option to add notes on a player as you can see in @claire_yang ‘s screenshot.

You could use that to remember not to accept a particular players game.

I don’t think you are, It’s a kind of miss in the implementation of the block system as i don’t see the reason to not have a full blockade or explain me otherwise.

My best response is watching anime at the same time. So I wouldn’t become bored no matter what my opponents doing. Not everyone is trolling, some just like to play until proper pass even if they are 100 points behind.

For one side yes but for the other side it’s not that everyone understand he is doing wrong and in that case may be surprised not only to be wrong but furthermore that no one came in to tell him.
So a third people, an experienced moderator can be better as waiting.

A player is entitled to play useless cuts in the hope that you will goof and give him a gift. But it is rude, and I would block them.

Playing dead moves with no purpose, especially self-atari moves, is prohibited (called stalling), and should be reported. Beginners often do this because they don’t know better, and they need instruction. Poor losers do this and then leave the game to timeout, and they need a formal warning. And cheats do this in the hope that you will get annoyed and leave the game, and they too need to be formally warned.

people who lose a game

Playing useless moves is quite common with weaker players.
If weird moves come from a DDK I think you should be patient and pass or respond according to the actual game situation.
If they come from a stronger player then it’s probably intended annoying behaviour and should be reported.

I tried to figure out which case is yours, but I’m quite disoriented: you only play on small boards and with quick timesettings. I wonder how many useless moves could someone put in a 9x9 game.
Also 9x9 outcome could actually be turned around with a single wrong answer in endgame.
If you like 9x9 blitz I think those moves are actually part of the strategy.

Moderators will evaluate your reports and act accordingly.

If you like 9x9 blitz I think those moves are actually part of the strategy.

I’m inclined to agree… very difficult to play pointless moves or too many stalling moves in a 9x9 game, and with blitz these moves stray even closer towards “legitimate strategy”

@frank_kettu: By the way, I love the term Boredom Tesuji.
So much nicer (and more neutral) than endgame trolling

And now that (some of) the mods are familiar with the term, I am going to use it when I play against a one celled idiot who insists on unnecessarily filling the board long after the game was actually decided.
Thanks for that. 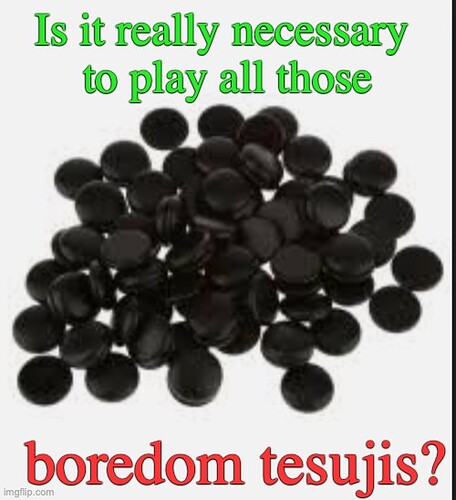 Well… as long as you’re being nice…

Well… as long as you’re being nice…

Yeah, I used an eufemism to make it sound nice

As soon as I judge that my opponent is just trying to waste my time, I resign.