Brains are funny, a language discussion

Today I found out that Kiev (/ˈkiːɛv/ KEE-ev) is the Russian pronunciation of the City, and that Ukrainians pronounce it Kyiv (/kiːv/ KEEV). And immediately as I continued watching news broadcasts, my brain started highlighting every time they pronounced it Kiev as weird/unusual despite it being literally the only way I have ever heard it or read it my whole life until today…
(and despite not being European, I actually hear it a lot because we have a fairly common dish in Australia called “Chicken Kiev”)

So please, share your own stories below of words you discovered a different pronunciation for and whether you also noticed your brain actively rewiring itself in real-time?

So what is it?

So what is it?

Crumbed chicken, injected with a kind of garlic and herb butter, and baked. Traditionally the bone is included, but at least in Australia it is more common for it to be served boneless. 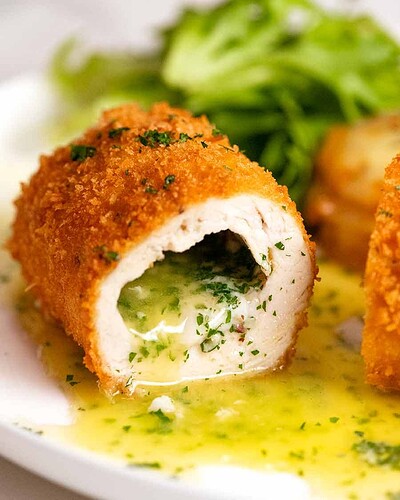 I’ve always encountered people who pronounced wrong, something like “g-o-u” but then I found a group of people who knew the true pronunciation “g-o”.

When I say things like “I’ll go to the supermarket” I get weird looks, but I guess people don’t know the correct pronunciation yet.

I used the adjectives “Russian”, “Ukranian”, and “as weird/unusual” in the main body of my story.

I apologise if saying “new/correct” in the discussion prompt gave a prescriptive impression, that was not my intent. Language is always changing and reflects a variety of times and cultures, I only wanted to start a genuine discussion about people’s experiences with learning language and how their brains present the world to them.

Well, I guess my joke wasn’t as good as I thought.

Anyway, it’s always weird to me personally to hear Greek words pronounced completely different in other languages. Especially anything that starts with x, ps, or contains eu.

And, I don’t remember the word exactly, I think it was something ending in “-ight”? But when I first started learning English I read it as “-icht”, but then I heard it spoken and it was “-ait”. That was a revelation to my young child mind.

It was a very common beginner word and I don’t remember which one after so many years, but it was a fun and interesting memory to dig up, thanks for creating this topic.

Well, I guess my joke wasn’t as good as I thought.

Anyway, it’s always weird to me personally to hear Greek words pronounced completely different in other languages. Especially anything that starts with x, ps, or contains eu.

As a Wrong Anglo-Saxon, I’d love to hear any examples that come to mind

Well, x is pronounced like in Saxon even in the beginning of words, no z sound.
Psy is psi, like Pepsi (somewhat).

Eu is ev or ef, depending on the word.

Oh, another one, when I learned that 이 is actually Ee, not Lee, there’s no L sound in there, but Lee is used for Korean names because people are used to it.

Half of what I thought French sounded like, going in with some English pronunciations gave me a lot to unlearn…

Now that I think of it, when I encountered the Latin alphabet as a very young child. The shift in my brain of “looks similar, is and isn’t the same”. It was a hill to climb.

Like most non native English speakers, there are many English words that I pronounced incorrectly for years. Usually my brain didn’t rewire instantly but maybe after a few days.

You’re making a joke, but as far as the game is concerned, you’re 100% correct that the original Japanese pronunciation /ɡo/ is a pretty short version of the vowel in “more”, while the various English pronunciations all use long diphthongs like /ɡoʊ/ or /ɡəʊ/ or /ɡəʉ/

something ending in “-ight”? But when I first started learning English I read it as “-icht”, but then I heard it spoken and it was “-ait”.

In older English that was pronounced as “-icht” (hence the spelling) and in Dutch and German it still is.

something like “g-o-u” but then I found a group of people who knew the true pronunciation “g-o”.

Like an initialism?? I’ve usually heard it said as an acronym. However, I guess some just say the full words “Game Orientalis”. Not sure where the “U” gets added from.

I used to say parameter as puh ruh meeeeeter.
I knew the word from English documentation but I’ve never heard it pronounced from an English native speaker before.

The informatics tutor from England said like pruh mter.
It was quite a shock.

Btw, I’m still not quite sure on how to pronounce browser.

The informatics tutor from England said like pruh mter.
It was quite a shock.

I would be a bit shocked too. I guess I mostly hear and say it as “puh ram meh ter”

how to pronounce browser

I say this like “brow ser”, where ser sounds the same as sir.

we have a fairly common dish in Australia

Oh, you might find this extra funny then because you know the accent involved.
Back in the classes I attended for English (20+ years ago) the local tutor had this great idea of hiring young native speaking teachers through an agency for the final classes.
This way we couldn’t cheat and talk in Greek to the teacher if we were at a loss of words.
The message was clear: “You either learn or you don’t get heard”.

Usually they teachers were British, because the goals was “British English” (the only certification available at the time was Cambridge Lower or Cambridge Proficiency. By the way, “Cambridge”, now there’s a word with a non-obvious pronounciation

So, one day, he wanted to play a game and arrange us in some way to organise it, so he told us:
"Broing me yoir cheers"
We were like “has he gone bananas? Why would we cheer?” so we tell him that we do not understand.
"com com" he said "broing me yoir cheers"
oh well, if that is what he wants … HUZZAAAAAAHH! we all went, at 3 in the mid-day in the middle of the village - the neighbours loved us

**Noi noi, don’ make such naise! Com oin lads. Don play doumb. The cheers, bring me yoir cheers"
and he got up and started arranging the chairs.

His cheers always cheer me up when I remember that incident.

We were very grateful for this teacher next year, when the CPE listening exam involved a tape of
two Scotchmen,
in a busy train station,
by the fountain,
talking about something,
while the examiner was eating crispies.
Comparatively with the previous year, that was easy

though we did complain and made the examiner stop crunching … I mean, come on.

Those dialects preserve the Middle Chinese pronunciation of 京 as kjaeng, prior to a phonetic shift in the northern dialects to the modern pronunciation.

So there’s no point comparing a soundbite of Standard Mandarin / Standard Chinese, which is the Beijing dialect, a northern form of the language, with a romanisation of a word from a southern dialect.