Wait I played this before, how could I forget

How do you type a chess piece into the OGS demo boards?

Oh
takes note
…
When will I get that OGS degree diploma?

I think you have to use both minds, you can both play the chess or the Go board at anytime but you have to ensure that you win both sides, that would be hard.

I spent some time reading through Wikipedia’s list of chess variants and The Classified Encyclopedia of Chess Variants. There are so many variants available! Surprisingly I found nothing with a last-player-to-move objective, but I got an idea from this:

This “forward only” rule is promising, but I don’t want the reversion to normal moves, and I have no idea what to do after checkmate. So I propose a new Chess variant:

Does this seem playable? What should we call it? (Monotonic chess sounds kind of boring…)

How about Amazons + Go?

How might something like that work? Maybe the arrows are replaced with white and black stones (each player using their own color) that can capture each other. The Amazons cannot be captured and move around as normal, and the stones are placed like how arrows are fired. The only change is colored arrows and a capturing mechanic for those.

I was thinking about simply adding the two games together in the combinatorial sense: you can move on either board, first player without a move loses.

Amazons should work fine! I’d love to see Chess + Go happen but anything plus Go would be fun to follow too. Is it playable at all on 5x5?

Gomoku+go should be pretty confusing.

I don’t think 5x5 Amazons would be interesting on it’s own, but together with another game it could work.

5x5 go is too small since one move claims the whole board (i. e. black would play first in the center of the go board, and white can’t gain anything later by playing there, assuming prisoner return).

Also we need to do something about the first-player advantage. Again assuming prisoner return, we can implement komi by giving white some extra prisoners in the beginning.

Sounds like banning tengen on the first move could make 5x5 Go a little more interesting.

Extra prisoners sounds like good compensation, but it’s actually not obvious to me that there’s any first-player advantage. For example, with Go + Go, the second player might be able to mirror every move on the other board to win - unless there’s some way to block that with superko.

So how does ko work with prisoner return? My intuition would be superko on the entire game state, including the number of prisoners and the player to move, and that would be easy to expand to include the other game.

True! There might still be the issue that on many turns, one player or the other is forced to move on the go board to not die with everything. But as long as one player can’t immediately take the entire board it’s going to be at least a little interesting. I’d be up for playing 5x5 Go + 5x5 Amazons with this modification (the initial placement of the Amazons also requires some consideration).

So how does ko work with prisoner return? My intuition would be superko on the entire game state, including the number of prisoners and the player to move, and that would be easy to expand to include the other game.

The superko state generally does not include prisoner counts - then it wouldn’t prevent basic ko’s. We could choose to include the (signed) difference in prisoner counts - this would be similar to how some go rulesets only excludes “balanced” cycles where both sides gain the same amount of prisoners. (unbalanced cycles such as sending two returning one are not gamebreaking under rules where prisoners are worth points)

However, since we are combining multiple games, unbalanced cycles could still be problematic if the other player plays in the other game instead of returning a prisoner. For instance if we have this position: 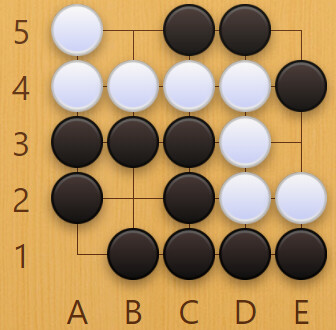 The only way for white to avoid giving black infinitely many moves on the go board is to let black capture all the white stones. So this particular situation is not game-breaking, it just means that a group that normally would be seki is now dead instead.

But there might be more pathological examples - I think sticking to regular superko (only considering the combined game state, ignoring prisoner counts) is the safer bet.

It’s also a little easier to keep track of

For example, with Go + Go, the second player might be able to mirror every move on the other board to win

My old idea to avoid was to just play on differently-sized boards (something like 9x9 + 13x13 for instance). But to tackle the problem more head-on, how about we forbid any sub-board from being a transformation (rotation/reflection/color inversion) of another sub-board?

I think to keep this rule managable, we should only check against other current board states, not the whole history. (so in a way, we apply superko across both time and space individually, but not both at the same time)

With this rule, we could try out stuff like 4x9x9: 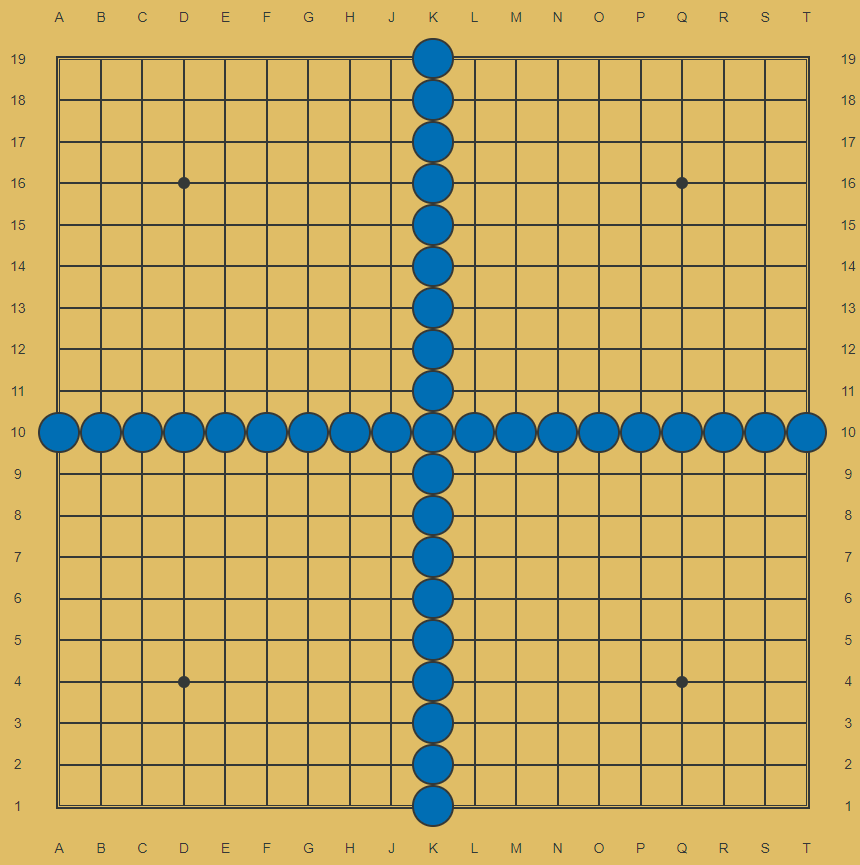 It could be played live on VGS, although the spatial superko will have to be checked manually.

Those are good ideas! But my point wasn’t that Go + Go is unplayable, just that it’s not obvious (to me) when there’s a first-move advantage in combined games.

Maybe it’s obvious in the cases we are considering somehow though?

Right, I went a bit off-topic because your comment gave me that other idea that I got excited about!

I don’t know what the first-player advantage is like in general. On one hand, the fact that komi is around 7 for board sizes 9x9 and up makes me think that for something like 4x9x9 it would be similar, if we somehow prevent mirroring. But it also doesn’t seem impossible that the way two boards cancel out with mirroring will still happen in some way without exact mirroring. So komi could very well be smaller than normal, but I would certainly prefer to play first in a no-komi game of Amazons + Go.

So to handle our uncertainty, I would suggest using some kind of dynamic komi, such as letting one player decide komi and the other decide which side to play.

The combination methods discussed in this thread have mainly focused on ways to put two games in parallel, with some degree of coupling, such as by making a move on one of the boards in each turn (but not both). The Go + Amazons proposal that I mentioned above is a different example of melding two games together, creating a new game that combines game play and mechanical elements of both games.

However, yet another style for combining two (or more) games is to integrate instances of one game as something to replace a core mechanic of another game. I realize that seems a bit vague, and maybe the easiest way to explain is with an example. Consider playing a game like Risk (or Diplomacy), where the outcome of each battle, rather than being decided by dice (or numerical advantage, in the case of Diplomacy), was instead decided with a game of Go (where each Go game would be handicapped to roughly reflect the material/positional advantage presented by the respective Risk/Diplomacy battle).