I would like to start a game of Amazons+Go.

This has been discussed in that topic: Chess plus Go

Now the time for discussion is over, and the time to play has started! Rules may evolve in the future, especially as we learn from our experience. I have already sketched rules for this game in some detail below. However, since this is the first game and since I don’t exclude the possibility that what I wrote is nonsense, the rules can evolve during the game if both players agree.

On their turn, a player must take the following two steps in order:

The player chooses one of their four Amazons and moves it on the board. The Amazon moves like a Queen in Chess: in a straight line orthogonally or diagonally. The Amazon must land on an empty intersection. The path of the Amazon must be empty: the Amazon cannot jump over other Amazons nor over go stones.

The player plays a go stone of their colour on the board. The stone must be played on an empty intersection. The path from the moved Amazon to the played go stone must be a straight line, orthogonally or diagonally, that only contains empty intersections. In other words, the go stone is “thrown” by the Amazon that just moved, and cannot be thrown over obstacles.

The game ends when any of the following happens:

Important note: if a player can move an Amazon, then they can throw a go stone.

Important note: it’s possible that this is broken and that we should use go scoring rules instead of this “no legal move” rule. Since this is the first game, I am open to changing the rules during the game if both players agree.

The board begins in this position: 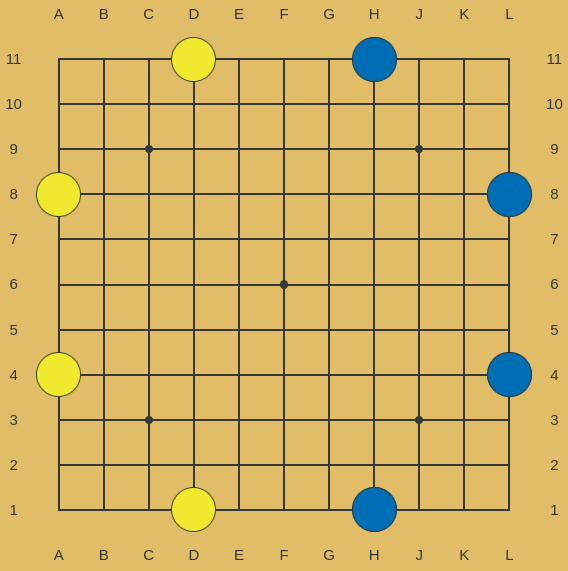 To make a move:

Currently there is no rule against kibitz on this thread. This might change in the future. In particular, discussion of game rules is welcome. 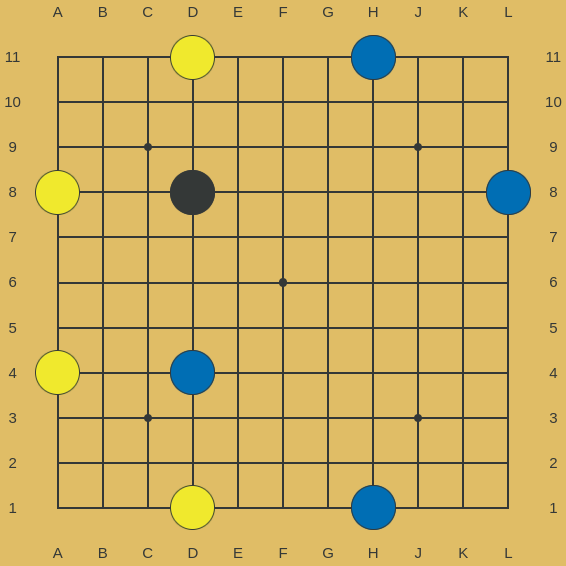 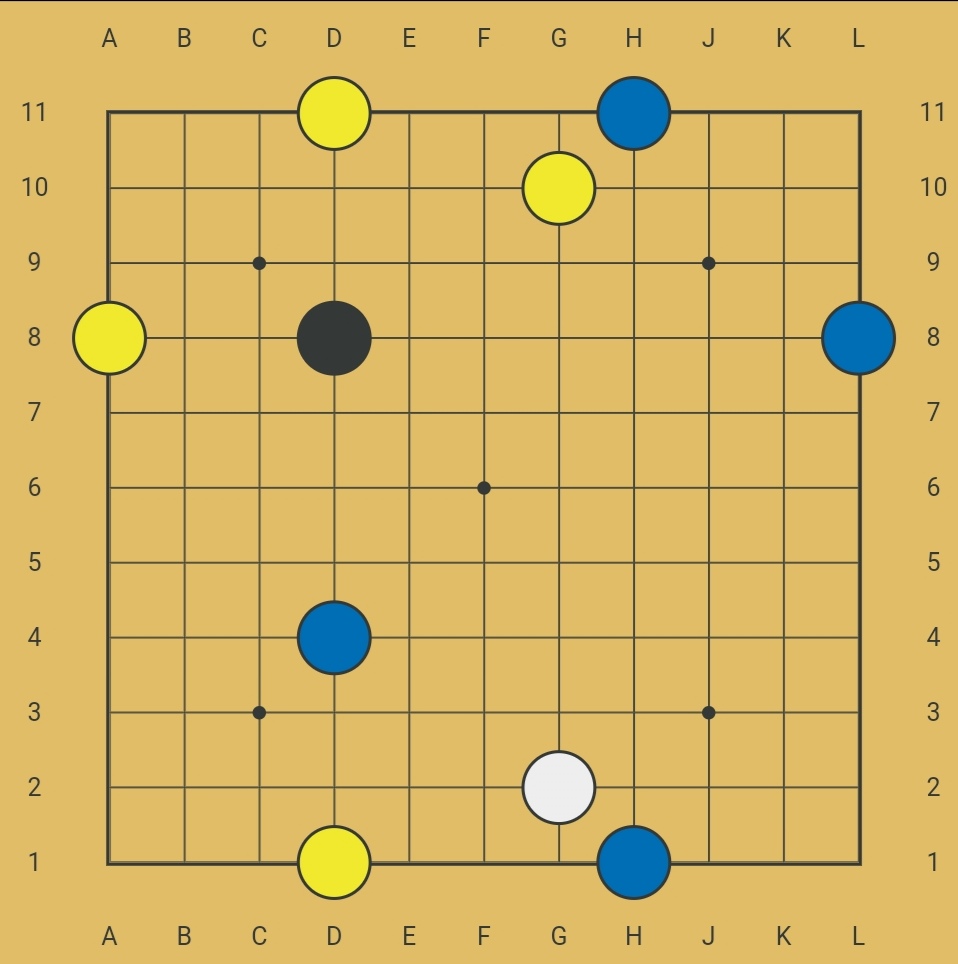 Not to interrupt the thread (I can delete the post/question after anyway) but is it that the amazons, rather than setting fire to the board to delete intersections, now shoot and place the go stones?

That sounds very interesting, and looking forward to seeing how it plays out

is it that the amazons, rather than setting fire to the board to delete intersections, now shoot and place the go stones?

Yes. The artisans who usually build and repair the bows are on strike. Thus the Amazons are using slingshots and go stones instead of bow+fire arrows.

(on phone so will skip screenshots just for right now) 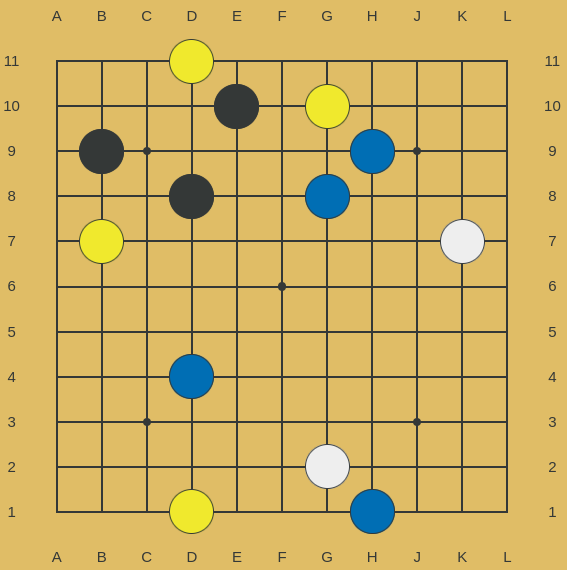 About the rules: one thing that I am worried about is that Go normally only counts orthogonal connection, not diagonal connection. However, Amazons can easily invade by moving through a kosumi. Perhaps that doesn’t matter (since invading go stones might get killed anyway) or perhaps for future games, we should come up with new rules to modify or restrict Amazons movement and make it more like go.

Also, Amazons normally end when a player cannot make a legal move. However, because we have the capture rule in go, that may not be a good ending condition. Perhaps it’s best to allow passing and count the score like a normal go game (with Chinese rules). I do not know.

(I don’t have much Amazons experience) 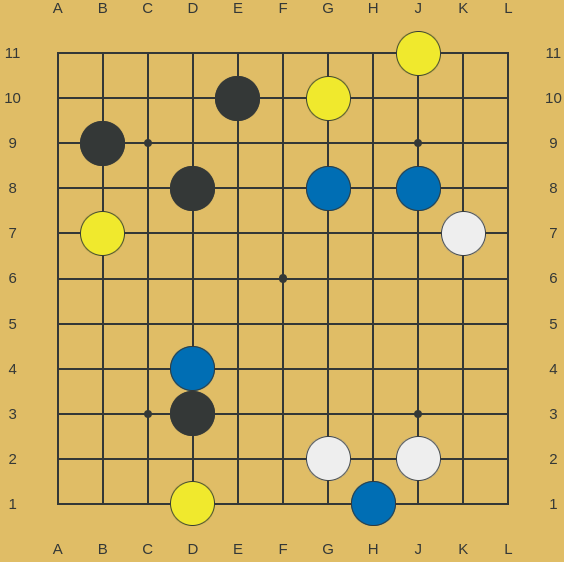 (I don’t have much Amazons experience)

7 is standard komi for 9x9 as well as 13x13 go, so I thought it would work there, too. But I don’t know if what we’re playing here is “Amazons with a slight go flavour” or “Go with a small Amazons flavour”. 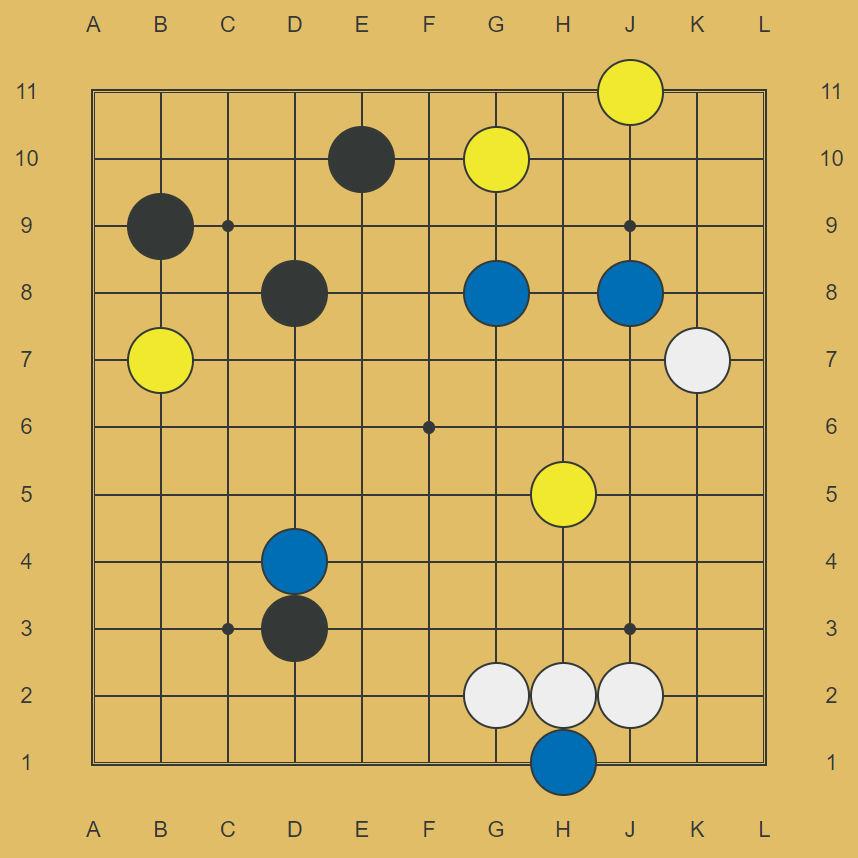 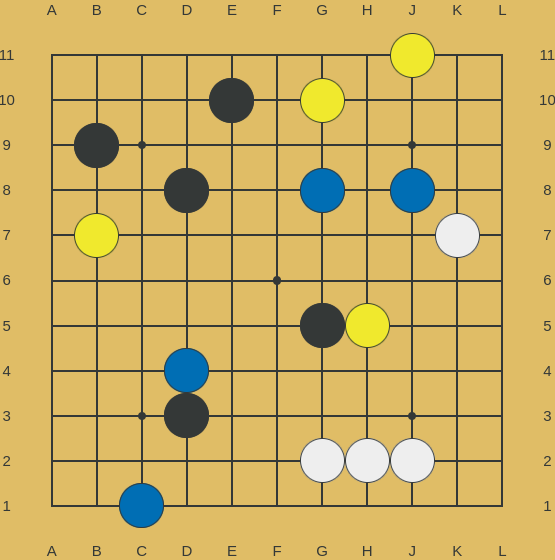 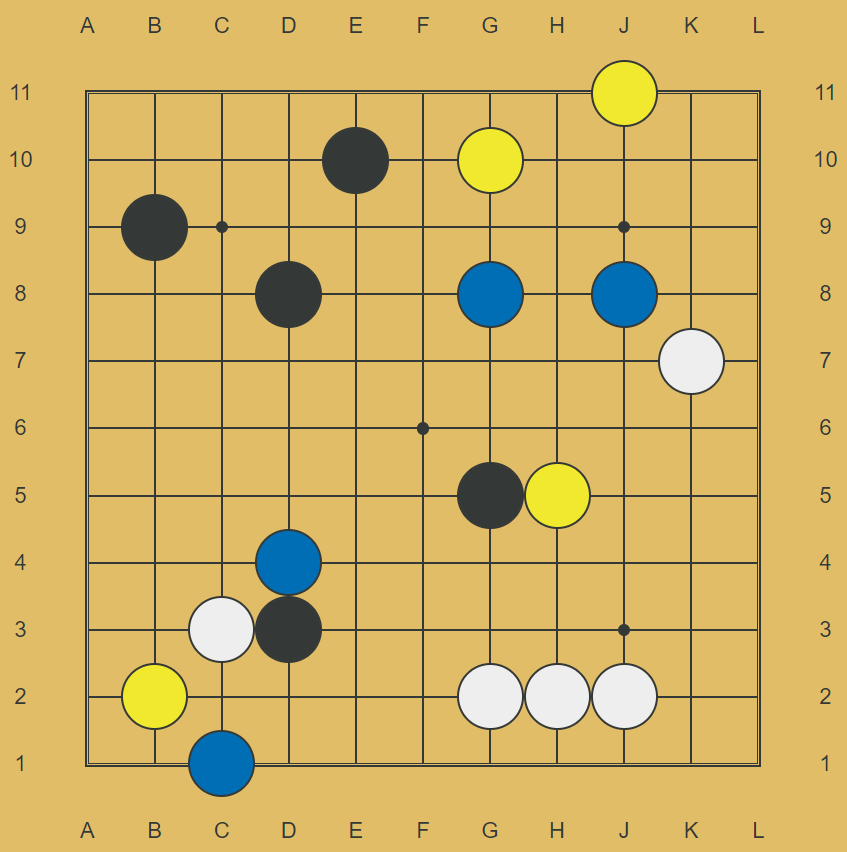 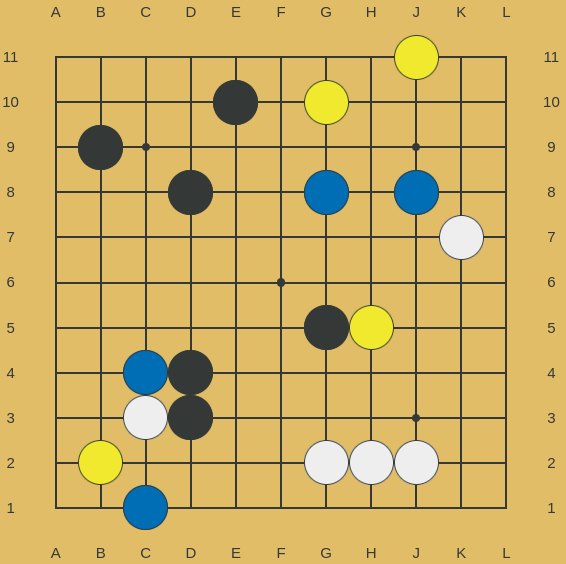 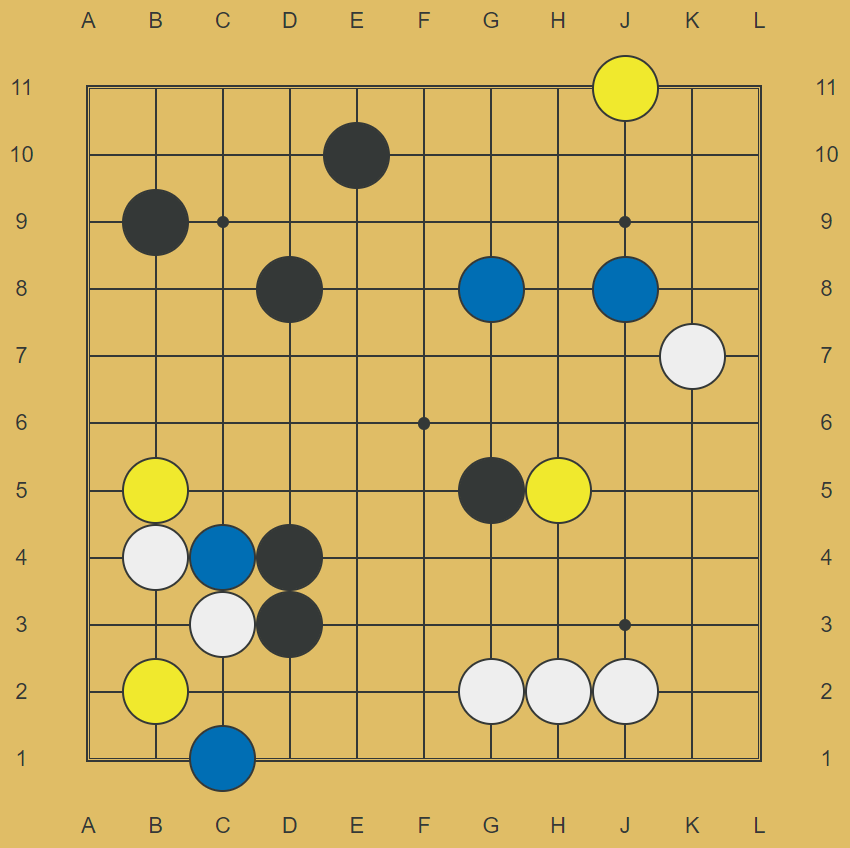 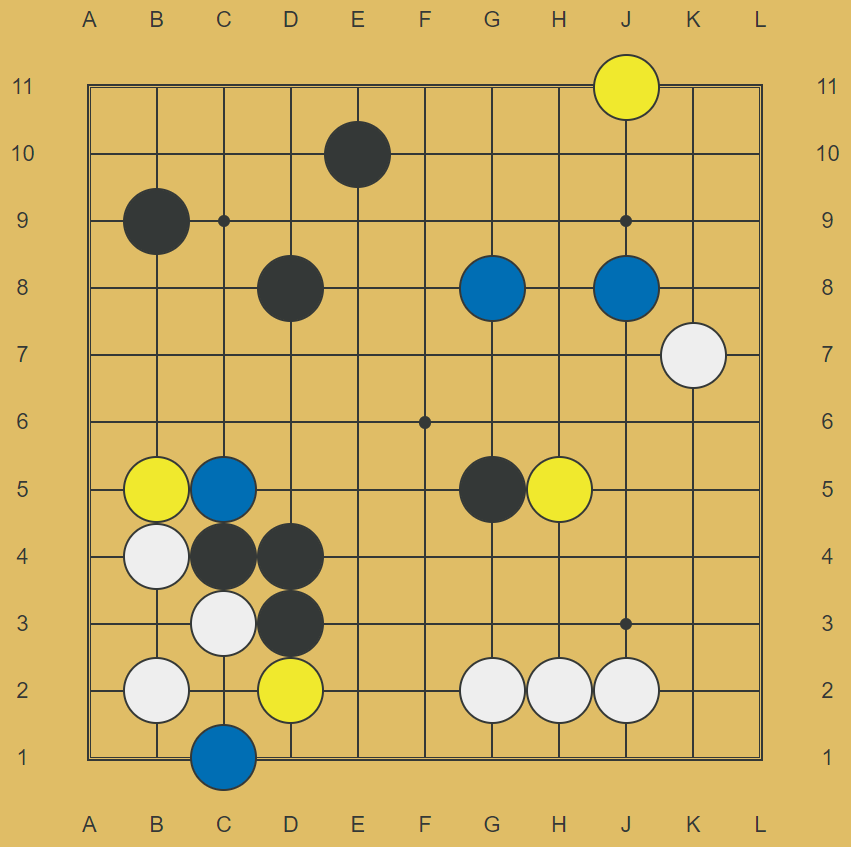 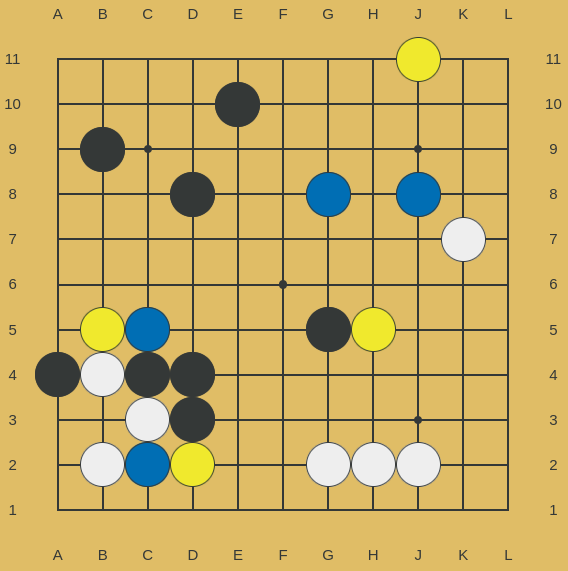 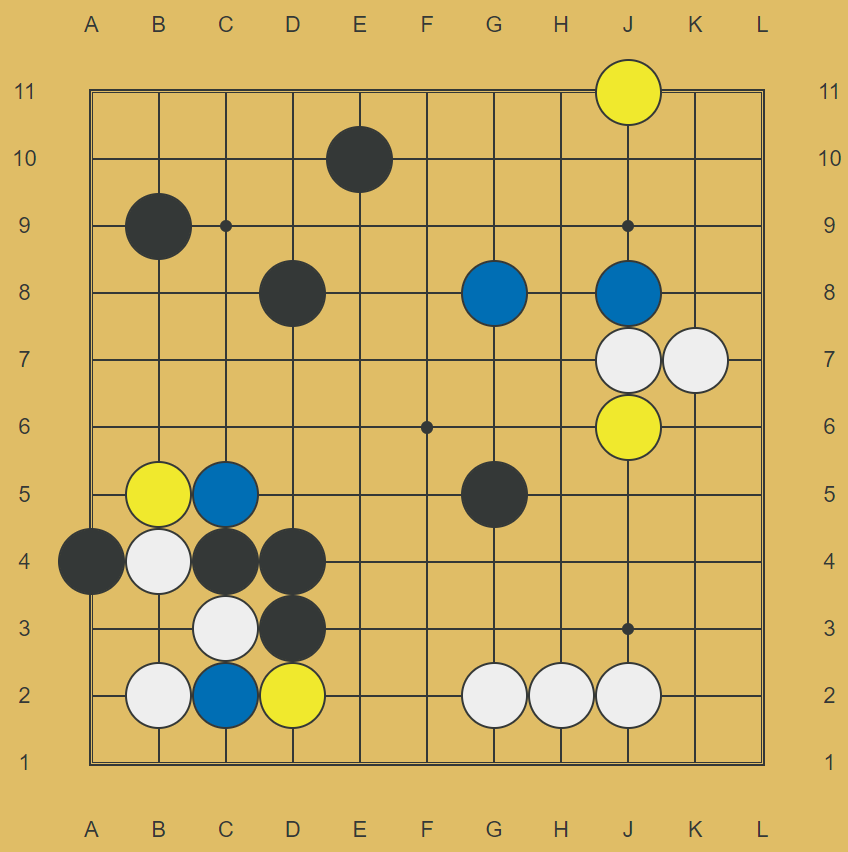