With all this talk about Chess and Go, is anyone interested in a forum game of Chess + Go? Has this been done before? How would we play it? 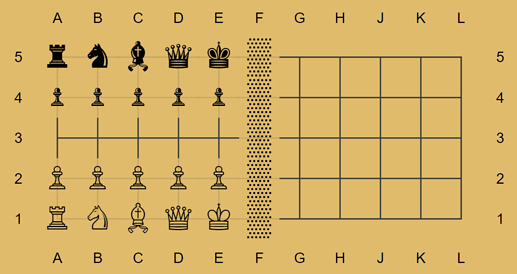 The idea is that it’s Chess on the left, Go on the right. Black and White take turns playing one move at a time on either side, until someone can’t make a move anywhere. The last player to move wins. Beyond that I am not sure what the rules should be. Komi? Checkmate? Ko?

We play capture go on the right an the game ends when either a go stone gets captured, or when it’s checkmate on the left / one of the kings gets captured.

Every turn must be a legal turn on either board, taking only the move history of this particular board into consideration, with the exception that we allow back-to-back moves by either colour (not sure if this necessitates introduction of additional rules).

I guess there are still gaps in the rules, like what happens if the chess game terminates as a tie.

Edit: thinking about this again, if we play capture go it might be necessary to start with one stone each already on board.

Random idea: what about having some chess pieces inside a go game?

I’m thinking of a game “Go + knights” where a chess piece bewaves both as a stone (occupying an intersection and cooperating with normal stones) and as a chess piece, being able to move and capture by taking opponent’s stone/piece and occupying that intersection.

Moving that piece means losing a stone locally (because it goes away) but gaining a stone elsewhere (the place where it goes) and possibly remove an opponent’s piece/stone from the board.

I wonder how could that work…

Random idea: what about having some chess pieces inside a go game?

Does anyone have the classic White to continue insisting this is a chess board XKCD comic?

I didn’t know that. I just googled it:

Explain xkcd is a wiki dedicated to explaining the webcomic xkcd. Go figure.

Didn’t know about “explain xkcd” either!

But I have a puzzle too: white to move!

Am I understanding the rules?

Not really trying to solve the puzzle.

There’s a unicode chess piece set Chess symbols in Unicode - Wikipedia so you can use the add labels on a demo board to add in the chess piece symbols. Although the white knight doesn’t look great in my screenshots.

This is just showing how much I’m bad at tsumego!!!

I just wanted to build a mockup and didn’t actually read my own puzzle. I’m sorry.

I wonder how could that work…

at the risk of continuing a derail since Feijoa’s OP was about side by side boards, could take some inspiration from Guerrilla Checkers: 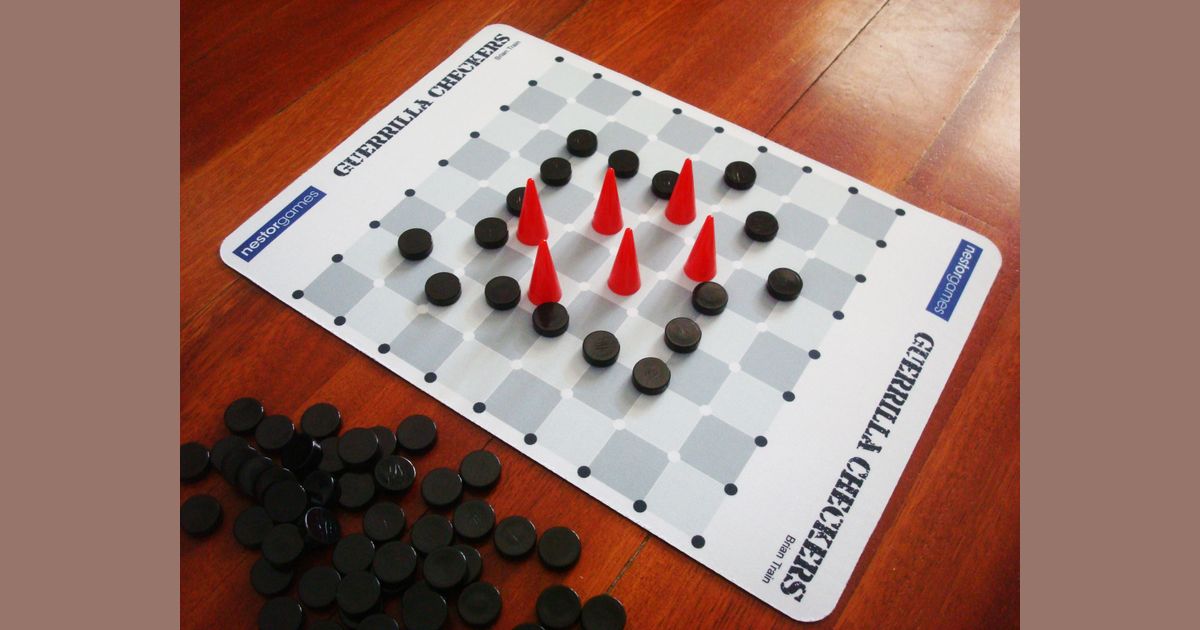 A hybrid of Checkers and Go, for two players. The "Guerrilla" player, using small Go stones, plays on the intersection points of the checkerboard squares to surround and capture the enemy pieces. Meanwhile, the "Counterinsurgent" player, using...

In this, one player has checkers pieces and moves them like checkers (jumping to capture) the other player has go stone like pieces, and places & surrounds to capture. It works pretty well, there’s some interesting nuances like checkers player must capture if able, IIRC

The asymmetry is to provoke comparisons to irregular conflicts, the designer is an expert of some kind in real world conflict simulations and has published some commercial historical games 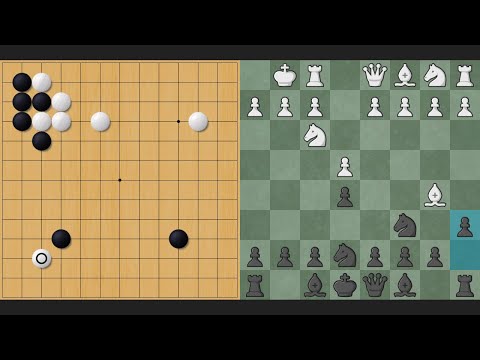 I haven’t played much Go+Chess since that video, but I’d like to do it again if someone wants to try!

It’s the perfect gamemode for people with low attention span, there’s always something to think about

Capture Go could work for a faster kind of game, sure! You might want a bigger board, though. I was already thinking that 5x5 Go is not as complicated as 5x5 chess.

For Go Plus Chess, I was thinking that No pass go rules work well for adding games combinatorially but keep the Go gameplay almost unchanged.

For Chess maybe we could just say that checkmate is the final legal move on that side. Maybe there’s still something to worry about with repetition.

The fun thing should be how switching from Go to Chess or back is like an extreme tenuki.

For Go Plus Chess, I was thinking that No pass go rules work well for adding games combinatorially but keep the Go gameplay almost unchanged.

I like the idea, but have a few questions: If the person who plays the last move is the winner, do we want to guarantee that the game ends? If yes how? It is not unusual that chess games reach a state where neither player can realistically checkmate anymore, but they could play on for a long time. In fact the game could go on indefinetely if it wasn’t for the rule regarding “three times repeating position” and the “50-moves rule”. (Off topic: this 50 moves threshold is completely arbitrary, and there exist positions where one side has a forced checkmate but 50 moves is not enough)

Another thought: I would expect that checkmating / capturing opponents king yields a player some sort of advantage. The consequence that neither player may move on the chessboard anymore is symmetrical. With these rules I expect games to go like this: First players play go until the territory boundaries are closed, then they play chess until the chess is over, then the player with more territory wins. You might as well just play no-pass go.

How do you type a chess piece into the OGS demo boards? BesoGo has an input box for arbitrary characters, which helps a lot. And unlike OGS, it doesn’t always erase all the chess pieces when I place a Go stone.

By the way, here’s the SGF for that board. It crashes OGS if I try to upload it:

What if we eliminate the kings, or allow kings to be captured like any other piece? There’s still the problem that one side might eventually capture all of their opponent’s pieces and have infinite moves. I would like the game to end!

Nice idea, but this separates the two games too strongly for my taste. What is happening on one board has close to zero impact on strategical decisions on the other board. I like the concept that players may choose on which board to play, as Feijoa proposed, because it introduces strategical considerations like “Which board is more important / more profitable to play on now?”

What if we eliminate the kings, or allow kings to be captured like any other piece? There’s still the problem that one side might eventually capture all of their opponent’s pieces and have infinite moves. I would like the game to end!

I think it is fine that the chess game ends on checkmate, I would suggest to introduce some advantage for the checkmating player though. The obvious example would be winning the combined game altogether, an example of a more subtle advantage off the top of my head would be “the player who checkmated earns the right to pass every other move on the go board”, which (I believe) essentially doubles their territory at the end of the game. 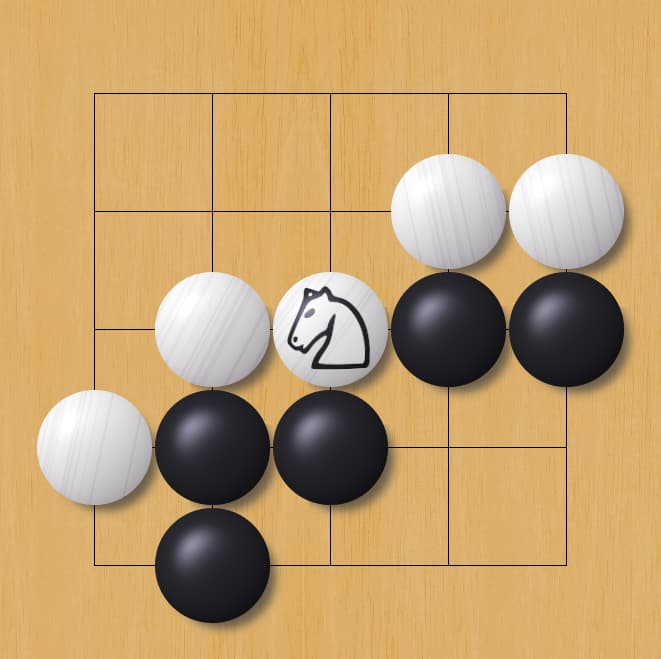 That does give a subtle advantage, but it seems strange for Chess to directly affect the Go rules like that.

Another possibility, encouraging captures, could be to give the chess players free moves to clean up their pieces after all of their opponents’ pieces (including the king) are captured. So if White captures all of Black with 8 pieces remaining, White wins 8 extra moves. A disadvantage of this is that the board will look too boring at the end

Gess is an abstract strategy board game for two players, involving a grid board and mutating pieces. The name was chosen as a conflation of "chess" and "Go". It is pronounced with a hard "g" as in "Go", and is thus homophonous with "guess". Gess was created by the Puzzles and Games Ring of The Archimedeans, and first published in 1994 in the society's journal Eureka. It was popularized by Ian Stewart's Mathematical Recreations column in the November 1994 issue of Scientific American. A Go se...