That seems like a good way of phrasing it

To know if black won you compare black’s score with 180.5 + half komi.

Ive been thinking about this recently. Physical komi would only be 3.25 white intersections since each intersection is worth two points, right…?

No, in Chinese rules an intersection occupied by a white living stone or an empty intersection in white’s territory is 1 point.

It’s the fundamental difference between “Area Scoring” and “Territory Scoring” creates the difference in how to report the result.

And specifically for the (current) Chinese rule, the first step is to half the total intersections (for 19x19 board 361 divided by 2 equals to 180.5). And then the actual “area” of one side is counted (plus/minus komi). The difference between one side’s area and half of the board intersections is reported.

For the Japanese rule, each side has to count individually for their own “territory”, and the difference “between” two sides is reported. 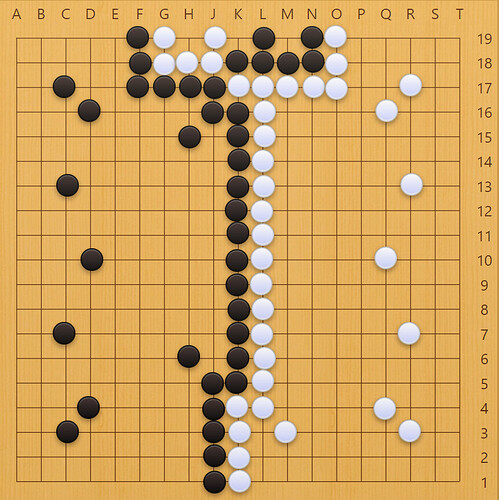 where i arranged the emptyness to be easier to count.

My curiosity is specifically about scoring a real board.
It’s quite easy to find examples of Japanese counting. I think all pro games I’ve ever seen where scored with Japanese rules. They are very fast at arranging stones and counting.

I’d like to see the same for Chinese rules. Is there some video of Chinese pro players which includes the scoring phase? Not necessarily pro players of course.
I wasn’t able to find one.
I fear that go in western languages is almost completely Japanese style.

I kept it as simple as possible but there is more flexibility possible.
One is that you don’t have to keep exactly the same borders (this invisible line passing between the black and white stones ) as you can permute stones touching this boundary to get even more rectangular empty spaces.
Just be careful to finish to count the emptyness before starting to count the remaining stones.
A bit of practice with yourself may help to feel more confortable.

A word of advice, do these kind of permutation under the scrutiny of your opponent as it can be easely mishandled (and a way then to cheat)

Besides i keep in mind a video i could take if i have an opportunity to illustrate Chinese scoring IRL but these days my opponents use that: modern Chinese counting IRL

I’d like to see the same for Chinese rules. Is there some video of Chinese pro players which includes the scoring phase? Not necessarily pro players of course. 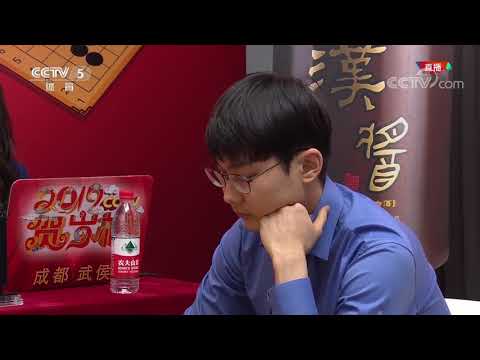 The game ended at 1:54:10, and scored by the judge (scoring finished at 1:57:00, took less than 3 minutes to score manually). The result is black 188 area (188 - 3.75 - 180.5 = 3.75, black won by 3.75 zi), Manual scoring basically takes two steps. First, remove one side of the stones to form easy to count territory shapes and remember the territory count. And then regroup the stones still on the board to easy to count groups (normally as groups of 10 where the boundary doesn’t need to be kept anymore). And finally added the stone count to get the total area (practically, just remember how many groups of 10 plus the remains). In this video, that is 10 times 10 territory space, and 8 times 10 stone groups, plus the remaining 8 stones.

I fear that go in western languages is almost completely Japanese style.

Chinese go terminologies had been transfer directly to Japan and remained as kanji for hundreds of years, but in late 19th century when Go first introduced to other languages till mid-20th century, almost all major source were from Japan. The terminologies that can be translated with simple words got translated, but those higher concepts like joseki(定石), tesuji(手筋), miai(見合い), gote(後手), sente(先手) etc., remained as loanwords (and they are still kanji in Japanese which Chinese readers can mostly understand, but vastly different in how to pronounce them). It also doesn’t help that some Chinese terminologies would be hard to pronounce for non-tonal language speakers, and honestly might cause confusion (like tuo 托 is a contact move from below, and tuo-xian 脫先 means tenuki, which has no relation to tuo whatsoever).

But I have to say though, the difficulty to find actual board scoring videos using the Chinese rule, might have nothing to do with this. I think there are several reasons. First is that, relatively speaking, Chinese games have more big fighting in mid-games, and the majority of the pro games ended with resigns. Second, is that the difference in curtsy for finishing the game. I saw quite a few pro games that already finished yose, even some dame, that can definitely go into scoring, but the losing side just resign out right before counting. For pros to be able to count in their head in great details is considered a vital “basic skill”. If one side already loses and the difference is more than 2 or 3 zi (4 to 6 points), and still goes into scoring, the losing side would be like losing not just the game, but a lack of skill as well. Third is that Chinese broadcasts are usually in the format of commentators replaying the game moves independently (usually on a standing board) than showing the actual games (especially older broadcasts on TV), and they would just inform the result to viewers without any scoring process. And finally is that broadcasts are usually just for viewers living in China with local media, some cannot even be viewed or searched outside of China, combined with those do get reuploaded, tend to use only Chinese words in their titles/descriptions without translation, making them even harder to find.

Nice explanation. If I understand correctly it means that the dame at the top can be ignored altogether as they will bring the same amount of points to both players? Is that right?

K19 is a special kind of dame, that neither side can fill, otherwise their own group would get captured (black fill, white take with M19, white fill, black take with H19) - a standoff. And since every point on the board has to belong to one side or another, its points was “shared” by both sides, otherwise it would get the wrong result using half of the board as the measuring standard (there is even a name for it in the Chinese rule - 歸本數).

It’s the key to Chinese rule - no intersection can be “ignored” and has to belong to someone. It’s also why in a game using the strict Chinese rule, neither side would be willing to pass before all “neutral liberties” are filled, since stones put on the dame do count into the final score (like a 1 point gote yose). A player only truly doesn’t want to fill a dame, unless it reduces the score.

But in the Japanese rule (or other territory scoring), the neutral dame is truly neutral, since even if one side keep passing, and the other filling all of them, it wouldn’t impact the result at all (since stones don’t count into their scores). Filling the dame is mostly for manually scoring convenient.

Thanks for the explanation. I did not understand at start that the dame were comprised in your calculation of black’s score.

What do you think of this? It’s a Japanese relationship to dame, but it gives the benefit of area counting, and only needing to worry about White. This is mostly with regard to playing over-the-board:

I proposed this previously in another Reddit post, but I wanted to summarize and clarify why I think the counting method would be simpler:

Summary:Area scoring with 6.5 Komi, but White gets another extra point if Black filled the last dame. Thus, 178 points or more for White is a win.

Counting method Over-The-Board:- Any captured stones during the game are returned to their original bowls.

EDIT (rounding up instead is needed) - To start counting, White fills in half the seki territory with White stones, but rounded up if it’s an odd # of seki: If there are 2, White fills 1 of them. If 4, fill 2. If there is only 1 seki territory in the ending position, White would fill it. If there are 3, White would fill 2 of the 3 (because half of 3 is 1.5, rounded up, is 2). The “round up” fill must be done with the extra stone from the dame rule, if White holds it. If White doesn’t hold that stone, then round up using a stone from the bowl.

Reminds me of Ing counting which need to have the exact quantity of stones. And a way to check it easely. So indeed a Ing set of stones and these aweful mechanical Ing bowls (well, my taste ofc)
Note that if you lose 1 stone you gonna be embarassed.

To have territory-scoring (so, no dame-parity effect, and granularity of score so that every extra point of territory is counted, not just those that cross the parity-rounding) but with a definition of territory “like area scoring” (thus, life and death can be played out) I find the Lasker-Maas rules to be much more intuitive: Lasker-Maas Rules at Sensei's Library

Those rules even allow “dame-fights” for the point of territory in the last ko, just like the Chinese or AGA rules do.

The only detail that I would personally change is the superko rule, using instead the “long cycle” rule: If a long cycle that players do not want to break appears, then the game ends with “no result”, unless that cycle is unbalanced (one player is capturing more stones, which is equivalent to saying that he is passing more than the opponent in the cycle), in which case the game is deemed a win for the player that captures more (this prevents sending-two-returning-one from being a problem in the area-scoring-phase). Since it makes almost no difference, and almost nobody takes superko into account in practice.

Yes, indeed Ing needs an exact count at the start of the game, but my proposal doesn’t have the ko rules of Ing, nor are you allowed to make the suicide moves. It’s just positional superko and no suicide moves allowed like many area rulesets.

If you were playing a stranger over the board and didn’t trust their count of White stones… I’d say you could just lay down the White stones on half the board. If the center point is included, that’s 181 stones. So in that case you could put the extra three somewhere (zip lock them away), and you have your 178 for a normal bowl; no weird mechanical bowls needed.

Point being, once you have your 178 White stones in the bowl, you don’t have any more counting to do at all (unless you’re just curious by how much someone won/lost)