Someone asked me a tutorial about how we count a game in Chinese rule. (He’s going to have to IRL.)

The very first thing is to understand what we want to do.

We are going to count all together, meaning the stones and the emptyness in the middle of the stones.
We count only for one color and then we can see if this color occupies more as half of the board, or not.

Here the game is finished. We remove the prisoners to the stock of stones (bowls), prisoners are of no interest in Chinese rules.

In next post, i will describe how to count more efficiently as one by one.

In next post, i will describe how to count more efficiently as one by one.

Patience.
Welcome back to the forum by the way.

So we can organize us to make it more easy.
First important thing is to understand that an empty intersection has the same value as one with a stone

Meaning as long as i don’t change the boundaries you can add or remove stones at will.

Here the same game where i arranged the emptyness to be easier to count. I didn’t modify the boundary.

We have 4x10 empty intersections.
We still need to add the remaining stones but now that we know the number of emptyness we can do as we want (we only need to know how many black stones to add to the score )

All good.
Please ask if it is still confused.

I did not understand this method before, but now I get it.

Any unfilled dame, whether from seki or otherwise, count as half a point for each player, so yes, you could just fill in half of the dame for each player, and manually count the half point if there are an odd number.

Understanding what is underlying helps to integrate sometimes.
Japanese rules as we call them are elaborated from the Chinese in a try to count smaller numbers. We count only the emptyness but then to get a result almost equivalent we have to put back the prisoners on the board.
In this way we ensure that both players play the same quantity of stones, so we can avoid to count them.

Note that generally Chinese players use the Japanese counting during the game to assess the balance of territories.

Note that Chinese players use the Japanese counting during the game to assess the balance of territories.

I’m no pro at counting, but I’ve noticed that for me Chinese counting can often be easier during a game since I can pick which color to count - the side with fewer, more rectangular areas.

Well no problem if you can do Chinese way, i think It’s all about the quickest and most confortable for each of us. Your reasons are quite Interesting i would say. 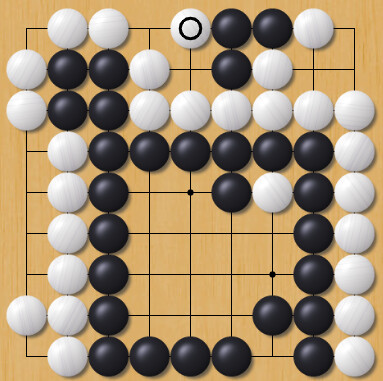 Since White moved last and there’s nothing strange like seki going on, the Japanese result should be the same. Slowly counting that up:

Before territories are decided, it’s often convenient to not count undecided areas as points for either player. Then it’s no longer possible to use the trick of counting only one side and automatically know the score difference (because you don’t know what the total will be). I think this is the main reason why most players count territory instead of area during the game

It can still be useful though, let’s say for instance you count your own solid area and notice that you need only 10 more points to have half the board. I’ve never really used this in Go except on 9x9, but I’ve used it quite a bit for Tumbleweed (another area control game, which does not have seki, so the total score is always equal to the size of the board).

Using Japanese counting, it is obvious that white is ahead. I don’t understand how you can see this using Chinese counting. 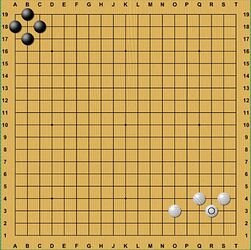 I don’t say It’s the most adapted but you can. Half of not yet defined area + white area is bigger as half of the board

Nice exsmple but slightly OT as it is not during but at the end of the game.
Now it can inspire for situation during a game. As long as you can add areas together and see that they are or they will be bigger as the half of the board.

No matter what, subtracting half komi is completely unintuitive to me.

Explanation without any seki on the board like the example.

I did go into a little more detail above, but essentially it’s the same point. I also think it is very unintuitive but I suppose it’s something one could learn as something that just works. (I believe one could also instead just add half the Komi to half the total points on the board instead – one can check that calculation I suppose.)

I think though dividing by two is also completely arbitrary the way I’ve laid it out.

Any unfilled dame, whether from seki or otherwise, count as half a point for each player, so yes, you could just fill in half of the dame for each player, and manually count the half point if there are an odd number.

I think knowing whether to add half a point or subtract half a point for odd number of points in seki to Black’s score is also unintuitive (I believe it’s adding 0.5 when I look at the calculation)

Just imagine the board with komi. 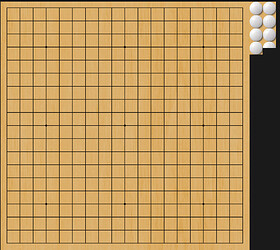 I think knowing whether to add half a point or subtract half a point for odd number of points in seki to Black’s score is also unintuitive (I believe it’s adding 0.5 when I look at the calculation)