This happens to me too. My experience says the message is said when an opponent in an ongoing corresponding game starts to look the game.

I have tried all of that. No dice. Ongoing.

I’ve also simply turned off the voice for “Game started”, which sometimes works in the short run, but is annoying if you have a challenge open while you’re looking at another site, for example, but the repetitive voice always comes back no matter what I set it to.

That’s kind of new annoying bug, may I refer to @anoek our developer.

I have a similar problem. I also use Firefox. I think it is related to reestablishing a connection. That would explain the deletion of the thread as a wrong resolve for asyncronicity.
Accept my sympathies. My computer only shouts GAME STARTED 4-5 times a day, but it’s annoying as hell, I cannot even imagine it every 30secs.

I keep hearing 收到挑战 (received a challenge). May be linked to when opponent moves in a game.

New to the site, but having the same issue. “Game started” randomly spoken. I turned off the game started audio effect in settings, but it didn’t matter, still getting this annoying voice. I have to turn off my speakers completely to use the site… Using Chrome 89.0 on Ubuntu 20.

This happens to me as well. Both on Chrome/Ubuntu and Chrome/Android.

/me is Firefox fan
/me is triggered

If Chrome keeps “pausing sync” on me, firefox might get another user

Continuing the discussion from "Game started" everytime I go online:

This is the main and only problem i have with this site. it drives my brother nuts

Or is it some kind of secret agreement with educational institutions to not let go divert their students in classrooms?

although not the exact same issue, whenever my computer is going “challenge received” the way i found to get rid of that is to reject current challenges from others. i wish i didn’t have to sometimes.
hope this bug gets fixed or you find a way around it.

Continuing the discussion from “Game started” everytime I go online:

This is the main and only problem i have with this site. it drives my brother nuts

Maybe someone has mentioned this before but have you tried just turning it off? (In sound settings) 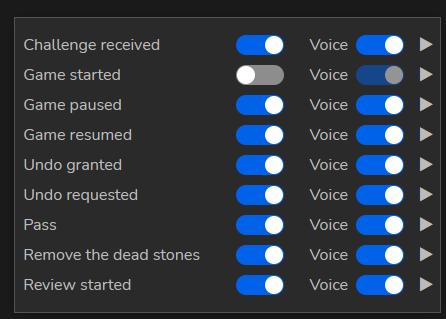 I guess this is related. Yesterday with one device (win 10/edge) in the OGS log in screen (but not logged in) and another device logged in and playing they both played “game started” sound when a game started on one of them.
Made me jump since the logged in device was in another room but the not logged in one was next to me on the desk…
No idea if this is useful in figuring out this bug!

To add another example. I had someone else’s finished game open in the chrome forums shortcut thing on my phone. Locked phone. Unlocked phone to read a WhatsApp message. My phone started to say “game started” but cut off as WhatsApp opened.
I went to the forums shortcut thing and “game started” played.
No game was starting but I did start a game on 16 March. Does OGS remember is it doesn’t get to say "game started"when the game actually starts (e.g. started through 3rd party app) and saves it up to play when it gets the chance when the main site is visited?