Could online-go.com offer a Shogi option?

if we could play Shogi as well, maybe your system would become more famous

I dont know I would like to learn shogi, and every other places are horrible.

We might attract more Japanese players that way too

I don’t think it could be done at the snap of a finger, but I can join an OGS shogi player group if there’s one.
I have like 6 games experience though

81dojo.com is a good site for shogi, but yeah, I’d enjoy a more OGS-y alternative.

I think adding Shogi to OGS would be a great idea, though wouldn’t we have to change the name of the server since OGS means Online Go Server?

If this is at all feasible, I’d be the most excited little critter this side of the Mississippi. <3

wouldn’t we have to change the name of the server since OGS means Online Go Server?

That’s a great name, but I have been thinking that if we are going to add Shogi to OGS, Why don’t we start adding other Asian games to the server? There are many out there that people all over the world enjoy, examples are, Shogi, Jungle, Go-moku, and Xiangqi (Chinese Chess). All are amazing games that we could add to OGS. We could start calling it the Online Asian Game Server. OAGS for short. What do you guys think?

We’re probably vastly underestimating how difficult any of these would be to implement… Go has one of THE simplest rulesets of any game out there, and even just correctly implementing “draw” results for games with even scores doesn’t seem to be trivial… much less implementing an in-browser option for a game with rules as complex as shogi, I imagine. But a boy-girl can certainly dream…

Why don’t we start adding other Asian games to the server?

In all seriousness, the devs don’t even have the time to add everything they want to add and improve on the Go side of things… I find it highly unlikely that they’ll ever introduce a second game, let alone multiple.

I think it would be nicer to implement variants of Go that have been requested first, such as rengo, tibetan go, etc. Also, that’s a piece of cake compared to implementing shogi.

Besides, there’s other places that are trying to focus on implementing as many abstract strategic games as possible, such as Little Golem.

if we could play Shogi as well, maybe your system would become more famous

Compared to the ~6400 registered Go players in Germany, there are about 100 registered tournament shogi players.

If there’s a community out there that’s in even worse shape population-size-wise compared to Go, it’s shogi. xD

How can one truly evaluate the popularity of a board game? When I consider how Go is popular I think of AlphaGo’s place in history and raising awareness. I consider all of the tournaments that are held and all the of the Go clubs that are spread throughout the world. I look at books dedicated to the subject and the number of communities that exist online where enthusiasts share their thoughts and socialize.

But none of this is really representative of how many people are playing Go on a Goban in their own homes. To the same extent, how can we judge the popularity of Go-moku, Shogi, Xiangqi, or Monopoly for that matter? Without those numbers, can anybody really know how popular a game is

I’m pretty sure most clubs and books and players were already there before 2015, so I don’t think the popularity of go over shogi has to do with AlphaGo much.

The main reasons shogi is not popular, if I had to guess, are:

There are international shogi piece symbols which are easier to recognize for western players. I don’t even play shogi or care if they are on OGS (quite frankly it sounds like perfect way for OGS to overshoot itself) I just thought it important to point out.

I personally think Shogi is amazing. I’ve spent years with Chess and Shogi. I think of them as two very separate games. They may share a common lineage but nothing about the game experience itself is very comparable. These days I prefer Shogi over Chess by a country mile

Concerning OGS expanding to include other games, I am very much against it. OGS does Go very well. Better than anybody else in my opinion. I too would like to see more Go variants introduced before other games were ever considered. More so, I am a bit of a purist. I think that OGS should stick to Go and pour all potential resources into expanding support for the site and adding additional features. However, I do wish there were other sites that gave other abstract games as serious of a treatment as OGS has provided for Go

There are international shogi piece symbols which are easier to recognize for western players.

I didn’t know this! I have seen practice pieces with the possible move patters on them, something like this: 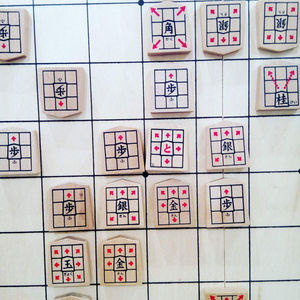 These days I prefer Shogi over Chess by a country mile

I feel shogi is a lot more dynamic and I like that the battles are more local than chess. It moves more slowly, that’s nice too.

I have seen practice pieces with the possible move patters on them, something like this:

YEEEEEES!!! These are so darn cool! I could have used these when I was learning. They definitely make it easier to teach new players with too! Thank you for sharing these. I think I might just try and craft myself a set