Can you remind us: what are the main things to think about differently in Chinese?

(I think I’ve never played those rules before!)

3 Likes
Which rule set do you think is better, Chinese or Japanese?
Fast Correspondence Tournaments
Kosh September 29, 2018, 1:42am #2

Compared to Japanese Rules which most westerners learn, Chinese rules differ primarily in the scoring and include the Super-Ko rule and ofc most if not all bots use Chinese rules for simplicity.

Why simpler? Because playing extra moves while your opponent passes does not modify the score under Chinese rules. This makes it much easier to resolve any disagreement about the final score. My hope is that this reduces the call on Mods and reduces the bad feelings that go with an improperly completed/scored game.

A difference of 1 point may occur between the rule sets if black plays both first and last. It is therefor worth filling in the dame(neutral) points or more precisely, worth doing if there are an odd number of them. For example; If there are six neutral points left then you can safely pass but if your opponent takes one of them then you need to respond, reducing the number of neutral points to four.

My belief is that Japanese Rules have evolved from Chinese Rules as a short-cut score estimation method and then the Nihon-Kiin conventions prevent distortion of the score or the need for hypothetical play.

Thanks! Interestingly, I know the mechanics of the rules, but was looking for what impact they have on actual play (so people like me don’t have to learn this “the hard way”

One thing you said is that it’s OK to play moves while your opponent passes. I think this means it’s OK to play in your own territory, right? (Which is not the case in Japanese).

Are there any other pragmatic considerations?

The only pragmatic considerations I’m aware of when playing under Chinese Rules are:
1: Continue playing until there are an even number of neutral points. If in doubt, fill them all.
2: Simply resolve scoring disagreements by resuming and exterminating as required.
3: Super-Ko applies. I’ve never actually encountered this and I don’t know if it is implemented on OGS.

Edit: Could a Mod please split this thread. I don’t wish to clutter the ‘Fast Correspondence Tournaments’ Announcements Thread and I apologise for doing so. Done. Thankyou @AdamR.

I see only three differences to keep in mind.

I find the last one a bit more slower than japanese, so i dislike using chinese rules on real board.

Oh and for the super-ko… don’t do them. They are awful and you should feel bad about yourself for creating one, no matter what ruleset you use

It’s also worth mentioning that if a seki occurs, under Chinese scoring surrounded points within the seki are counted whereas they wouldn’t be under the Japanese rules. That is, surrounded points that are clearly controlled by one player.

fill all dames, since those are 1 point each

I had a game earlier this year, where we spent days filling dames. Thank god my opponent was a bit smarter than i, and realized he could do conditional moves for the last ~10 dames.
And i promised to myself to never use chinese rules in correspondence games anymore. xD

I wonder whether in a tourney context where Chinese is better for other reasons, this might be solved by having the mod call the game when it hits dame-only?

If its half-point game, it will be decided by having odd/even number of dames. So i guess its better for all to just play them out, or just resign if the game isn’t that close.

I only play AGA/Chinese rules, and mostly correspondence games. If there are an even number of dame left, there is no harm in passing instead of filling them. Auto-scoring will just mark them as blue squares and they aren’t counted for either player. If there are an uneven number of dame left, the same thing applies unless it’s a half-point game, in which case you should play them out if you want to prevent bitter tears.

For 9x9 it’s of little consequence (most of my tourneys are 9x9) and as previously stated, you can both pass when there are an even number of dames left. Actually if my opponent passes with only dames left, I pass without counting them because I don’t wish to take advantage of their not realising/knowing that they might matter. Does that make me a sandbagger???

For 19x19 you make a better case but not enough to sway me. AGA Rules may actually be the perfect, ‘Best of Both Worlds’, compromise but I’m not starting that thread

and since most other tournaments (including the other Fast ones) are Japanese Rules, I like the idea of offering an alternative to those who might have a preference.

I think the “it doesn’t matter if you pass with even dame” helps a lot.

Hmm - how does this jive with

I see only three differences to keep in mind.

fill all dames, since those are 1 point each

While it’s possible to avoid this (see above) I’m not disagreeing with it because it’s still the safest, idiot proof approach. I’m SDK as is @_KoBa and speaking for myself, I still occasionally find that what I thought was a neutral point isn’t because something changes as the number of outside liberties drop to zero.

See ‘A Beautiful Mind’ for a good example of this.

“Chinese rules differ primarily in the scoring and include the Super-Ko rule”, real life Chinese rules actually DO NOT use full superko. A triple ko voids the game, just as Japanese. “Chinese superko” is used, which is the prohibition to “loop the game” precisely for the common case of “sending two returning one”: https://senseis.xmp.net/?ChineseSuperko

Almost all go servers “Chinese rules” use superko, so they are not “Real life Chinese rules”, but instead are essentially identical to AGA Rules (perhaps with positional/situational superko being the only difference, which has basically no practical effect, even in cases of triple ko, unless you specifically construct an artificial “rule monster” position).

This is my source: https://senseis.xmp.net/?ChineseRules 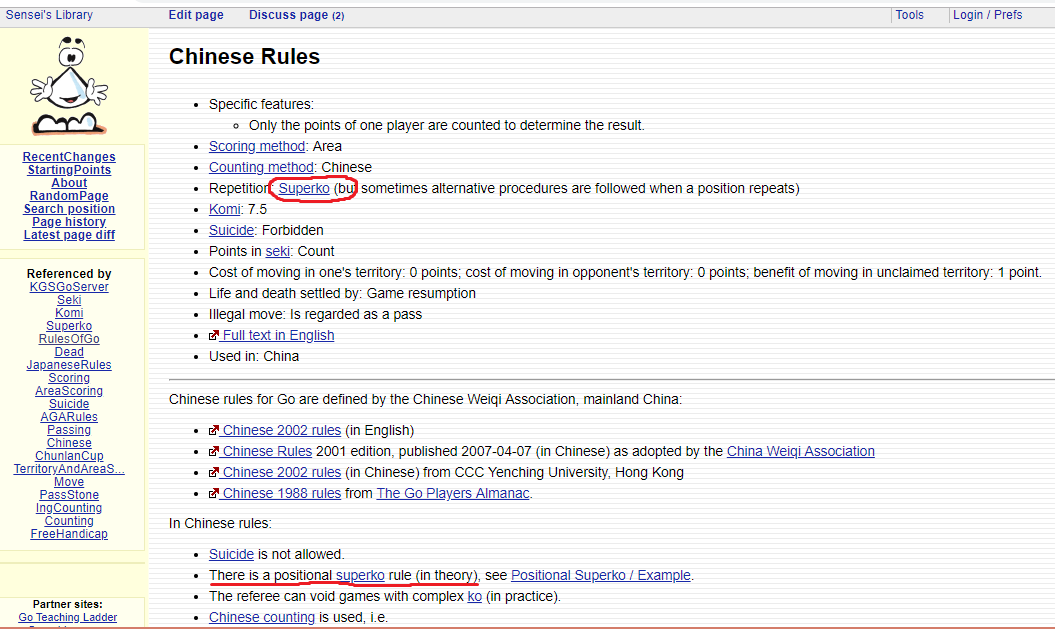 but I note they say “but sometimes alternative procedures are followed…”
and later, “There is a positional superko rule (in theory)”.

I’ll worry about it when I experience it in an uncontrived game for myself.

Yes, and the example shown there says " […] but in practice the rules are not applied like this in China.". Yet another example of one of my favorite sayings: “In theory, there is no difference between theory and practice, but in practice there is” = )

I find the last one a bit more slower than japanese, so i dislike using chinese rules on real board.

Maybe it’s because you don’t use them often? Myself I find them quicker, especially because you have a lot of freedom by moving the stones around, adding or removing some for convenience…
On the Japanese ruleset side, it’s more esthetic and convenient for keeping the original game looking.

The other important thing to keep in mind is - unless you are constantly losing or winning games by 0.5 points - it really doesn’t matter. If the score is 1.5 or more points different, then the same person wins either by Chinese or Japanese rules

If AlphaGo is consistently beating you by 0.5 points (like it does!), then it’s time to break out the rule books, call the judges, and read the fine print, but aside from the corner case of “extremely close games” you don’t really have to worry about it

The funny thing is that some very strong bots will wind up winning by only 0.5 points since the are programmed to maximize probability of winning, by playing safe while sacrificing some points rather than maintaining a larger margin of victory.

This type of behavior might come off as rude/insulting against a human player, so the AlphaGo team actually made efforts to make it behave a bit more human-like in the end game.