Do you think it's possible to make territory here?

Look at the left top. Black plays. I think it’s not posible.
Am i wrong? 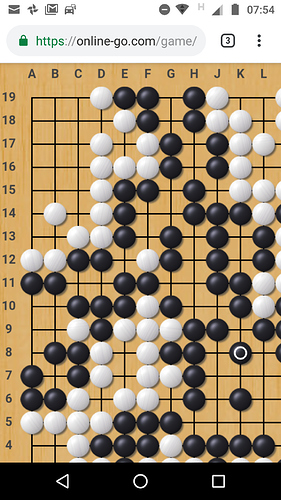 I don’t think so either. White can easily make two eyes with E17 and B13, so even seki seems impossible.

Of course in general it depends on how your opponent plays, so as long as you’re playing forcing moves (in this case moves that threaten to capture or make eyes), it might be possible to swing a lost game around. Personally I don’t like playing those kind of games against people who make desperate attempts to win; it only works if your opponent will make an exploitable mistake.

In this game, however, black is already comfortably ahead (it’s this game, right?), so you don’t have to do anything.

Yes. It’s about that game.
I’m asking now because that corner has changed, and i’m not thinking on playing that corner. It was only to be sure in the future, about this kind of positions. Your explaining about the two eyes easy to make is so clear. Thanks.

EDIT : I see now the smurf post, so i add this: when i posted this question, i already passed my move, so it’s a finished game (not in the facts, but my intention). And you have my compromise: i won’t play that corner. Just a learning question. Not thinking to take advantage.
I’m sorry if it was unapropiated.

I am certain you didn’t mean to, but that’s why principles exist. They need to stand, regardless of intentions. Otherwise you’re saying the end justifies the means.

It’s ok, sometimes I need to be reminded of this as well.

Thanks for the clarification.