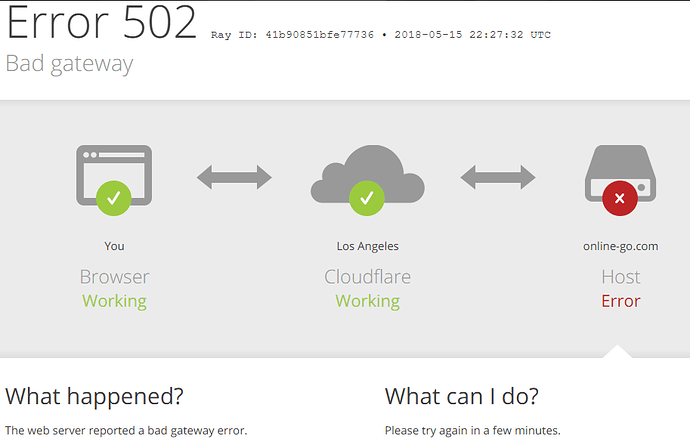 Me, too, using Explorer, after I had a worse time than usual with the Firefox problem. @AdamR and I have been discussing it.

The private window works, so far, with IE, but not with Firefox, though it did for the past week or more. I’m using Windows 8 on an HP laptop. My Firefox is up to date, but IE isn’t supported anymore, I think.

These errors are usually the result of the server being overloaded (too many requests to handle). It shouldn’t be dependent on which browser / operating system you’re using, although clearing the cache might help refresh the page (if the server works smoothly again).

Cloudflare is a service that works as an intermediate between the server and home computers. Its purpose is to show cached files to lessen the load on the server, basically to protect against DDoS or similar things, so since there is no problem connecting to the cloudflare part, the problem has to lie at the OGS server side.

Rating graph stops working and I get 502 errors mid game.

Hang on, we have our best man looking into it