We’ve all played them. Every now and then we stumble upon a move that seems to perfectly fit the situation. These are the moves in which the conventional wisdom would tell you to play something else. In fact, most people would. But not you. You looked a little more closely and found something that gave you a surprising advantage and all the good feelings that go along with that. It doesn’t really matter if it would be the AI move. It just felt good playing it, and the other player didn’t respond accurately afterward.

For me, the most recent move like this is move 28 below:

Please share any moves that fit this description or otherwise made you all happy inside.

This felt like the perfect reduction: if black defended then I could just reduce the lower side with good endgame from either corner, and if he attacked with a cap like in the game then I invade and the reduction stone makes for a roomy life inside: 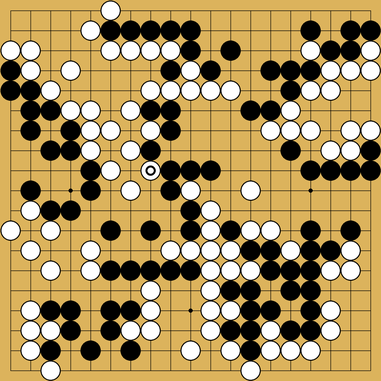 This 2-space jump felt good to simultaneously grow my top side moyo and reduce Black’s thickness I had just given from invading in sente on the right side. KataGo is not so impressed because it sees black can do things in my lower side so want to reinforce there. I managed to get away with not doing that as black invaded the top and in the process of chasing it I got to use my happy move and secure the lower side. 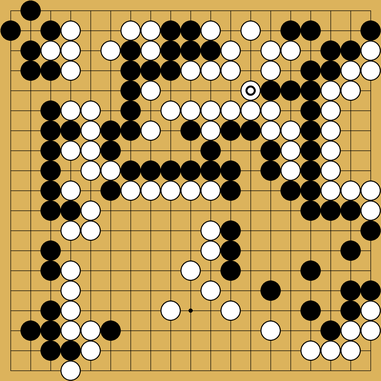 Breakfast 3p overplayed by 1 line so I cut off the stone and took the lead: 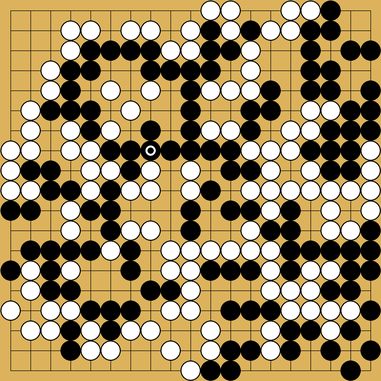 Interesting that the shallow KataGo analysis thinks White is winning by half before I start the working inside sequence so has not found it. I encourage you to keep reading why this move works, my favourite variation ends with a beautiful double snapback about 20 moves later. 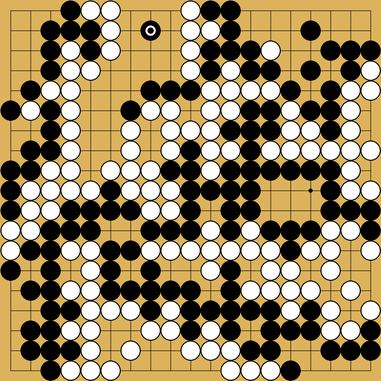 I’m not sure if this move is really that unconventional:

Move 130 in this game: [koji115 vs. gennan]
It was a fairly quick game and I didn’t really count. The KataGo review puts me behind by 25 points at this point, but I didn’t have that feeling during the game. 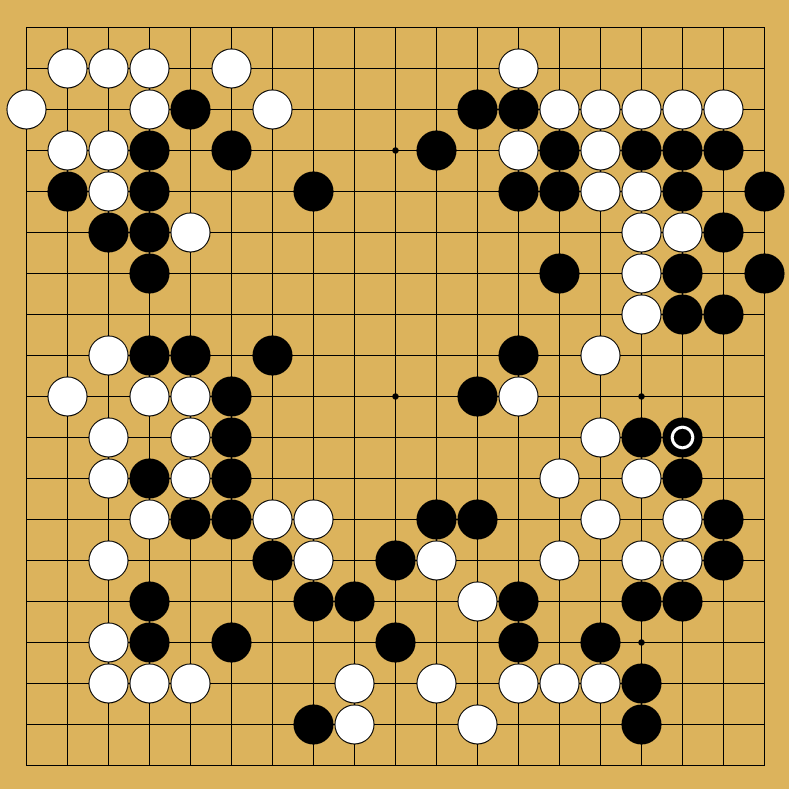 image789×789 13.7 KB
My opponent didn’t respond accurately to my challenge, but he did keep his cool, limiting the damage with move 147 (I might have tilted a bit in his shoes to lose more points).
So I didn’t get to rip off enough points to win the game, but it still felt quite satisfying to me during the game.
3 Likes
Lys June 23, 2021, 6:03am #5

I bet you feel all happy inside!!!

Good thing we didn’t have KataGo score estimator back then to convince me I’d lost. Or an automated “stalling” detector to ban me for supposedly wasting time with moves that apparently don’t work

How is this even possible? KataGo thinks it’s 26 wr% better than the best move found by KataGo?

Low accuracy. The free review uses very few playouts/rollouts, so it doesn’t read much and just gives its first impression on each position. 26% may be as little as 1 point in a close endgame (like a half-pointer game).

How is this even possible?

The OGS KataGo analysis has few playouts. Do not assume it is infallible, KataGo can miss sharp tactics that strong humans can find at these settings. I expect KataGo would find it with hundreds of thousands of playouts. Likewise my +50% game winning sequence. It took an EGF 7d about 5 minutes reading in their head. It took me longer analysing variations.

But here KataGo knows about the move and has evaluated it as stronger than its recommendation. Why doesn’t it recommend the stronger move?

It didn’t realise the power of that move until it was played in the game, forcing it to evaluate it more accurately than it did one move earlier. But that doesn’t update the inaccurate evaluation on the earlier move.

My 15-block Katago found Mark’s move after about 10000 playouts. 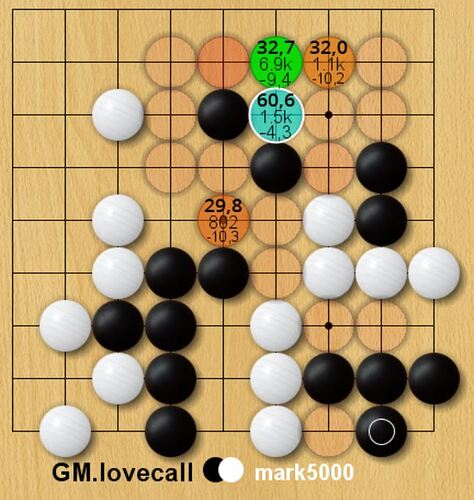 An EGF 7d found the same move when you asked them?

How is this even possible?

Neural network feels which moves are worth exploring. Other moves are mostly ignored. It spends a lot of playouts testing moves that look good and and spends very few playouts on other moves. So normal AI is good only at finding at least 1 good enough to win move. To find all good moves, you need modification like this: Releases · AncalagonX/leela-zero · GitHub
where all possible coordinates of next move are explored with equal number of playouts.

Would have been at 2011 London open when he was still “only” 7d. London Open | Tournament card | E.G.D. - European Go Database

There’s a setting for KataGo to make it explore more widely which should be used when using it for analysis rather than playing.

if you’re doing any form of analysis, I recommend setting “analysisWideRootNoise” to a value like 0.05, or 0.10. This setting makes KataGo explore much more widely at the root, judging a lot more moves, and makes it a little less likely that a move is missed in the way you described.

You can also easily configure KataGo to search wider in general, not just at the root. For example, “nnPolicyTemperature=1.1” and “cpuctExploration=1.5” and “cpuctExplorationLog=0.6”. This will also slightly reduce the risk of missing improved moves within the tree. Or try yet-more extreme numbers, play with it and see.

The reason these settings aren’t default, of course, is that they make play worse on average, holding compute fixed. Because for play, you care a little bit more about finding a move that’s good enough and being a bit more sure of the move you’re planning to play that there is nothing wrong with it when you go deep. Whereas for analysis, depending on the goal of your analysis, maybe you care more about comparing alternatives, or finding the most likely optimal move, rather than a good-enough move, at the cost of searching less deeply and being less sure about any individual move that you might pick.

This move was so pretty, I built a hexagon / benzene ring around tengen. I was tempted to omit 126 to make it a perfect hexagon, but then Black’s clamp at L11 would have been trouble and I decided I wanted to win and not just draw pretty shapes. 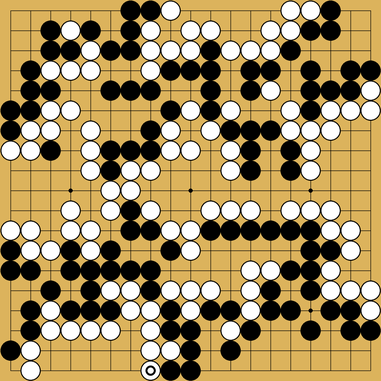 Well maybe this one is just a nose tesuji but it felt good anyway.

It also ended the game

(it was a while ago now, but I remember enjoying it)