For a better layout

Hi all, firstly, I wanted to congratulate the site developpers for the design. But still I believe there is room for improvement, this post is devoted to some I found recently. (If you have any other than those reported here, please, feel free to share, let’s make this post a stress release?

Layout critique is always a tricky thing, since many of people’s suggestions end up in taste discussions, nevertheless, there are some which might please all. Here I base my critique mostly on a simple criterion: better use of space, many of my suggestions will focus on fitting everything into a single screen, i.e., not having to scroll down. 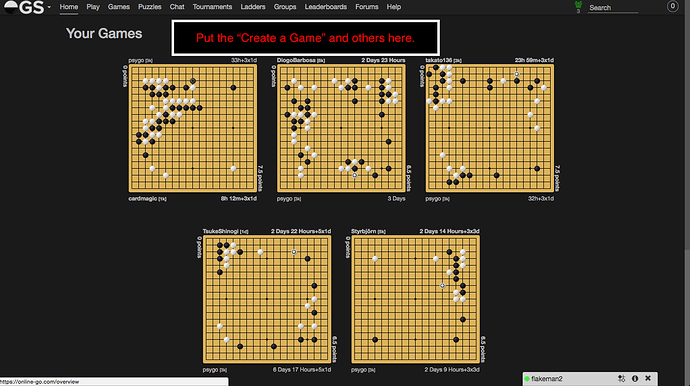 OGS - Home.png1431×801 99.6 KB
In the first image, I suggest that the buttons should be on top, so one doesn’t need to scroll down. And maybe there could be a better use of the lateral space. 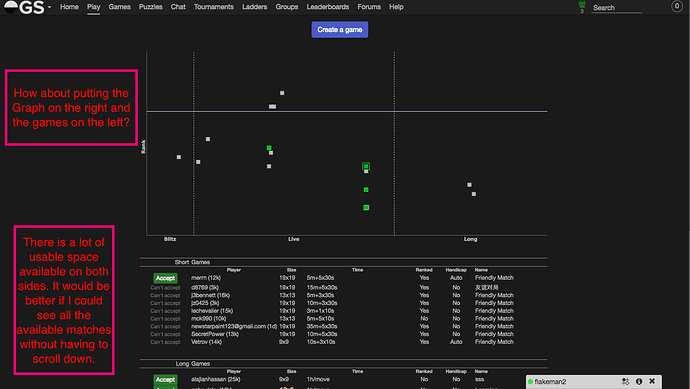 OGS - Play.png1422×803 103 KB
Again, I don’t recall if the space on the sides is used for advertising when you’re not a donner, but anyway, this graph has a lot of unused space, besides, look at the time configurations column, it has a huge gap… if only they were side by side, there would be no need of scrolling down… Maybe on a cell phone this wouldn’t be possible, but in a PC it would be better. 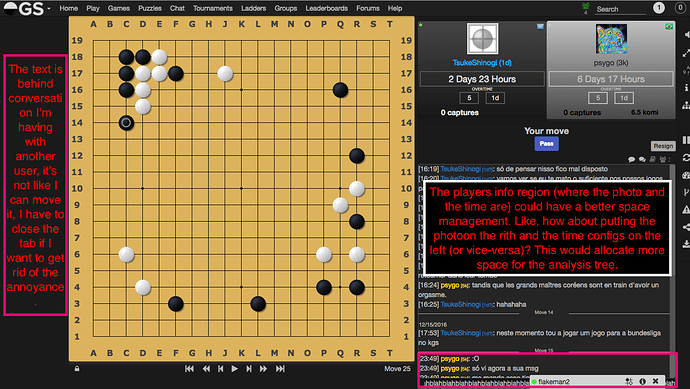 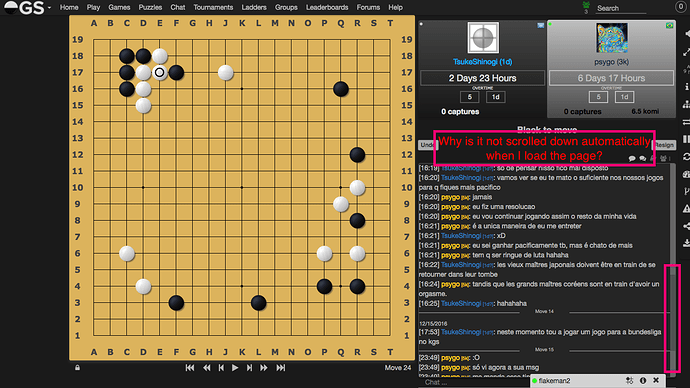 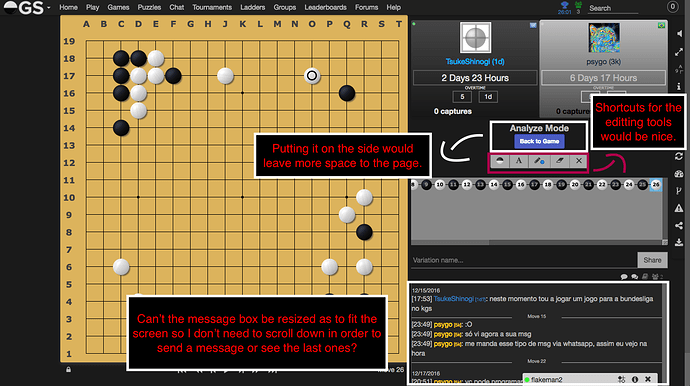 OGS - Game (Analysis).png1430×802 181 KB
I believe here is the most important thing correct, there should be more space on the screen for the review tree (why can KGS fit it better than OGS? That is the question.). Reallocating some buttons and compacting the users infos might do the trick, never forgetting to refit the message box. Also, not having shortcuts for editting is quite unnerving.

These were the major annoyances regarding the layout I’ve been feeling after finally paying more attention to this server and becoming a donator.

Some of my other questions/critiques are:

Thanks for the attention, I hope OGS gets better and better, because these outdated servers (KGS…) or poorly made ones (Tygem, wBaduk…) should not be the definitive solution.

There are shortcuts for the editing tools:

I didn’t know that. Where are they described in the server?

Ok, my bad, but I think it would be better if the shortcuts were on the in-page descriptions of the buttons, i.e., when you leave your mouse on top of a button.

The chat box is the most notable of the issues. I’d like that fixed aswell lol. Maybe make the chat boxes moveable idk.

here is one more: Alignment issue - white space at the left of the board

That’s strange, that much blank space never happened to me, if you see my images there is some blank space on the left but it’s not as much as yours, do you use some special configurations?

What @Degrading said. Movable chatbox! The way it is now makes looking at shared variations or following a malkovic log so much harder than necessary.

I advise to anyone who hasn’t found this feature:

Make the goban fullscreen (there’s a UI button for that, under the volume, and it is not fullscreen like [F11], it enlarges the goban by moving several UI elements, see attached screenshot), and
fiddle with your browser zoom settings to achieve maximum coverage. There’s still some unused space, but I blame squares and rectangles. 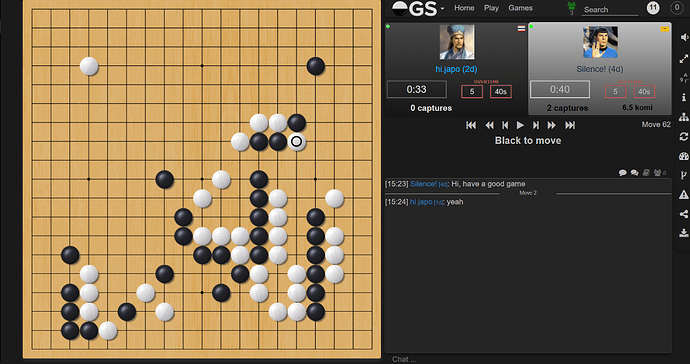 I’m mildly annoyed by the chat element as well…
However, I’m not sure if cluttering the interface as OP suggests is advisable. Too much information seen at once may be intimidating.

Totally agrees with everything said

We also have this awesome thing at bottom left of the chat rooms, i think it would be nice to have it on other pages as well. 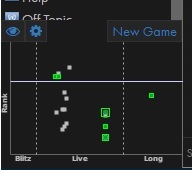 I also like it, even though I don’t use it (I only play correspondence games and have too many running already

), I just love the visual appearance … but I think it could use a lot of server power if it would be rendered on too many pages because this is something that constantly needs to be updated … ? I’m neither a networking nor a coding person, though.

Maybe a mute button for the chat?

If you look at those 2 areas where you have information about the players, it’s a huge waste of space. Move the picture to the left, rest of the text to the right and below. User names can be long so keep those below the icon.

So, people from the OGS team, do you agree or disagree with what was discussed so far? If you disagree, would you say why? If you agree, is it possible to implement any or all of the suggestions any time soon?