G0tstats is back! (with more stats)

I received an email from an user asking me to add a color blind mode. I suddenly realized I never thought about it before. So embarrassingly inconsiderate.

Currently swapping the palette between green & blue (it looks weird, I know) to support the aforementioned user, I’ll need to learn about color blindness before I can push a better color palette.

That was me.
Thank you so much for changing it so quickly.
It’s much better this way, at least for my eyes.

Orange-Blue should be a good pair for colour blind users.

I think there exists software that can show you what something will look like for a someone with a given type of color-blindness.

Awesome, thank you so much, you did that just for me, right?

Wow 2 years and a half

That’s some serious commitment from both of you

I think there exists software that can show you what something will look like for a someone with a given type of color-blindness.

Well yeah I found this: https://www.toptal.com/designers/colorfilter/

This site hasn’t worked in my Firefox for a while (Firefox 77; Ubuntu 20.04). The reason is a CORS failure (see support thread). I actually discovered it when working on my own app.

Is anyone else experiencing this?

This is actually my own fault. Turns out that Privacy Badger was blocking the request 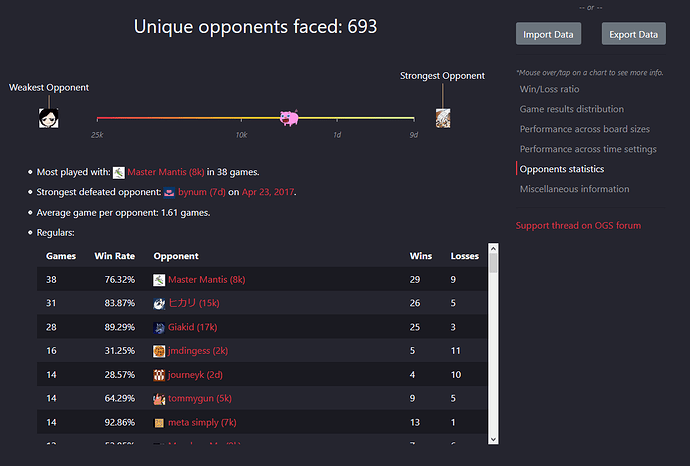 Thanks It’s a awesome little tool, working very well for me (I don’t have thousands of games yet)

Could you pls.make the header row sticky? And/or colour code wins & losses?
Seems my short-term memory is degrading, and I always have to scroll up to see which is which

<cough> That again makes me think of <cough> clickable column headers for <cough> sorting but that will probably make little sense here and would be asking too much in he first place since you’re giving us something awesome again already. So there, must’ve had something in my throat

Hello. This statistics tool is cool. One thing I’d like to see that isn’t shown yet:

How does time-of-day affect my results? That is, how much more do I tend to win when I play in the morning vs the afternoon vs the evening?

Yes. The best I can do is using the current device’s timezone to determine day vs night. That should suffice for most players, but for those who move around a lot that wouldn’t be very accurate.

weird thing i found, i just started playing on ogs late okt, i tried gOtstats. but it counts 28 games total and 2,000 games a day average. that isn’t right!? or is it?

Actually, it says you play 1 [decimal] 933 games per day on average (slightly less than 2 per day)

Totally unrelated trivia: Vietnamese use French number convention, which is exactly the opposite of US convention: , is the decimal separator (2,99 means 2.99), while thousands are separated with . like 2.000.000VNĐ.

Don’t ask me how confusing things become when you work in an IT company and the boss writes 3,996

I am pretty new to Got Stats but still, thank you! This app is great! I discovered a lot on it.