“A player with a hundred points will usually win.”

Reminds me of a famous quote from John Madden (a legendary American football coach talking about football, but I think it applies here as well)

What if both have over hundred points? One will still lose.
361-202=159 stones to draw boundaries, still a bunch of configuration…

It says usually, not always.

The idea is presumably that if one can collect a hundred points then the opponent’s potential can be taken less seriously.

Makes me think of soccer player Johan Cruyff who also coined a lot of soccer proverbs.
Some even adaptable for go proverbs:

Hendrik Johannes Cruijff OON (Dutch: [ˈjoːɦɑn ˈkrœyf] (listen), internationally spelled Cruyff; 25 April 1947 – 24 March 2016) was a Dutch professional football player and coach. As a player, he won the Ballon d'Or three times, in 1971, 1973, and 1974. Cruyff was a proponent of the football philosophy known as Total Football explored by Rinus Michels, and is widely regarded as one of the greatest and most prolific players in the history of the sport. In the late 1960s and early 1970s, Dutch f...

(go) is a game of mistakes. Whoever makes the fewest mistakes wins.

That’s true at every level but even more for 7k up to 3k, who in a large majority are trying to build a full game and eliminate these big black holes in their moves.

“The ball is round, the game lasts 90 minutes. Everything else is pure theory.”
—Sepp Herberger

“I always wondered what keep people interested in watching people running after a ball for 90mn”
—Me.

Others might wonder what keeps people interested in putting stones on a board for a few hundred moves.

Of course, each one his wondering.

You have got to shoot (attack), otherwise you can’t score (win).

That’s the less common. Taking the size of a football field, it’s quite few probability that you shoot in your own goal when aiming the opponent goal, as failing an attack in go and give an advantage to your opponent.

in a more general wait you can’t attack relentlessly in go, there are necessary and good defensive moves to play too.
But I like the idea of having to power your games with attack and defense plans, not just delimiting areas.

An analogy to that with football is playing too far forward and aggressively in attack, while leaving oneself vulnerable to counterattack.

The stones are round, the goban is 19 by 19. Everything else is pure theory.

– paraphrased from comments by @Groin at Try to live challenge? - #12 by Groin in turn interpreting the book Secret Chronicle of Handicap Go.

For Black or for White?

with handicap means as Black.

Playing as White is against handicap or playing handicapped.

Well, that was the meaning I meant to convey anyway. “Playing a handicap game as Black” doesn’t sound all that proverbial.

On second thoughts, I think Taking handicap… is actually clearest.

White gives the handicap and Black takes it.

The percentage will vary when reducing the handicap, with less focus on defense

Edit: thx for your own edit.

I just came across a long list of proverbs at GoBase.org - Go Proverbs

I was in the process of quoting them all for redundancy archival, but the pointless inanity of the truisms offered by Pierre Audouard annoyed me out of that.

I also find many of the sayings on this list to be obvious, unhelpful, misleading, dated and even false.

Here are some of the better ones, in my opinion. The interesting thing about a lot of proverbs is that at a certain point in one’s development, the thought emerges: “Why did someone write this down? Why did they feel the need to remind players not to reduce their own liberties, or to connect their stones and separate those of the opponent, or to defend their weak groups rather than their strong ones?”

That indicates that you’ve passed the level at which that proverb is of greatest use, but it can still benefit weaker players. Implementation is also very important: why are you violating Bill Taylor’s proverb and reducing your own liberties? For endgame? As a ko threat? In order to make a squeeze? And was it a legitimate reason in that specific situation? – this way, some of these proverbs can be taken to a higher level of analysis. 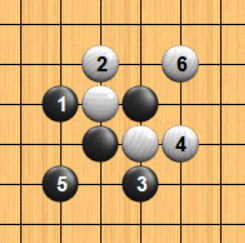 But I don’t get this one:

White is always trying to kill a bigger group than black is trying to save.