This reminds me of the game ran by @yebellz: Detective Go

How about this go variant: every turn, White plays 3 moves, and Black plays only two moves, but one of the two Black moves is hidden.

Recently I thought about a way how to (maybe) fix the balancing problems with Detective Go. The fugitives stones would be made immortal, but the fugitive may only play moves adjacent to one of their stones (with the exception of the very first move). The game ends when the fugitive has no legal moves left.

The goal of the fugitive is to “survive” until move X, where X can be calibrated to enable a balanced game (depending on the board size and number of detectives, I reckon).

I imagine it would be very different to the original detective go, but might be worth a try.

For this version and the original detective go, there is also a possibility to introduce hidden “traitors” among the detectives

If I understand correctly, the fugitive can only have one group of stones, and loses as soon as this group has no more liberties.

…and you call this group “immortal”? I guess it’s immortal in the sense that the fugitive loses when it’s captured, so by definition it cannot be captured before the end of the game

You are right that under these rules it makes no difference whether the fugitives stones can be captured or not. My thought process was that the fugitive stones need a “buff”, hence the idea to make them immortal.
As a consequence we need to redefine the goal, and since immortal stones can capture any board state of “normal” stones, I thought a restriction for the fugitive was necessary. Only now that you point it out do I realise that this restriction makes the other rules change inconsequencial

While I do believe that the suggested variant is more tractable in terms of balance, I imagine it would be more fun if the fugitive was allowed to play disconnected moves (in which case making the fugitive stones immortal makes sense again), but maybe with some other restriction.

Sorry for hijacking this thread to brainstorm some ideas for variants

Crazy idea: How about combining Go with Werewolf?

In unicolour go, the black stones are not differentiated from the white stones. But the players can remember which is which because they know who played which stone.

I imagine that the villagers should propose a series of capturing tests to confirm that each other are the same color of stone. Would captures still eliminate players? Each attempted capture, successful or unsuccessful narrows down the possible color assignment combinations until enough information is gathered.

Whether or not such a strategy could definitely succeed, definitely be undermined by the werewolves, or require an element of luck, would depend on the balance of werewolves to villages, and the exact mechanics of the elimination mechanism.

I don’t think capturing should be eliminating, no.

I agree that successfully capturing a stone gives lots of information to the Innocents, yes.

Note that randomly trying to capture stones for the sake of finding werewolves would probably be pretty hard.

For instance, consider the following attempt: 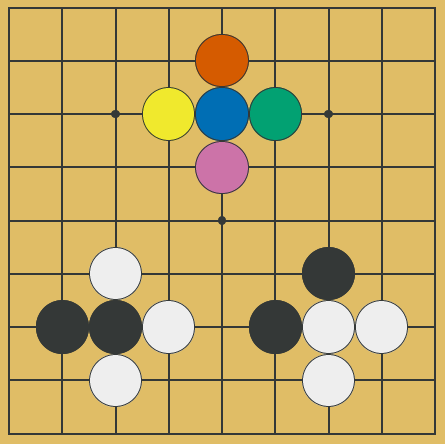 The attempted ponnuki at the top could easily be any of the two shapes at the bottom. No stone is captured, and the only information you get is “at least one of the four surrounding players is in the same team as blue”.

You can also make use of the corners, reducing the liberties and possibilities further.

Even though conclusive evidence might not be gained in each attempt, it still reveals some logical information. Combining multiple attempts across enough different combinations should eventually reveal the wolves.

Awesome idea! What would be the goal of the game? If it is having more territory than the other team, then one strategy for the villagers might be to all build safe groups and try to fairly distribute the territory among players. Of course the werewolfes can probably sabotage this somehow.

I really like this idea and want to try this sometime. But I feel like there are still some rules questions to answer. For example what is the goal / winning condition, is there an elimination rule etc.

We could also additionally make use of the “werewolf moves” idea, i.e. the werewolves may play moves (secretly, i.e. during a “night phase”) where the arbiter reveals which colour these stones actually have, but of course does not tell who decided on these moves.

I’ve been thinking about this for a while. What do you think of this setup?

1 arbiter, 9 players, each is assigned a secret role. All stones are marked with a distinct colour indicating who played this stone, but this colour is not used for determining chains, liberties etc. (instead, the hidden colour is used for this. The hidden colours are refered to as Village and Wolf)

The goal of each team is to gain more points for their colour than the other team.

… So basically @ArsenLapin1’s idea with some added roles to add to the confusion. Do you think this could create a balanced game? It is difficult to balance a fundamentally asymmetric setup. I believe the fact that each round there are more Villager stones placed than Werewolf stones, is a huge advantage for team Village. But we can’t even the team sizes, else team Wolf has a huge information advantage.

I think in the Lifein19x19 threads there was also a mechanism that at any time, the players could decide to vote to eliminate someone.

But every time they do, the Wolf team gets to place an extra stone.

Their setup is different in many ways though, right? Would you add this rule?

I don’t know. A game without elimination has its merits.

I’m mostly worried about the Amnesiac. From what I understand, there will be no hints at all about who is the Amnesiac and who is a simple Villager. So if you’re told that you’re a Villager, your best bet is to play as if you were indeed a villager, but at the end of the game there is a 20% chance that you’ll “switch teams” when the game master finally reveals the roles.

Perhaps I would like it more if the Werewolves were told the set of players with hidden role Werewolf or Spy or Amnesiac. Although it will make it harder for the Werewolves to identify the Spy.

Perhaps I would like it more if the Werewolves were told the set of players with hidden role Werewolf or Spy or Amnesiac. Although it will make it harder for the Werewolves to identify the Spy.

That’s fair and is probably a slight buff for team Wolf, which probably needs it.

I assume that its possible to even the playing field by giving komi to one team, but it’ll be difficult to determine a fair number.