I’d like to discuss and hopefully play a multiplayer (>2) capture Go variant. @stone_defender deserves credit for inspiring this with a suggestion made elsewhere.

For an initial game played on these forums, I suggest the following rules for communication

For an initial game, I hoping for at least six players, and ideally more, in order to ensure maximum chaos.

We can use @Vsotvep’s Multicolor Go tool which limits us to a maximum of nine players.

What size board should we use?

8 Likes
DipGo, a love letter to OGS
Collective development of a server for variants
How to start a new Battle Royale Go?
yebellz January 12, 2022, 5:20pm #2

In some situations, where being the next to be eliminated is inevitable, a player might choose to play a suicidal move that impacts the remaining players. The possible threat to do so might even give that player leverage to avoid that situation in the first place. 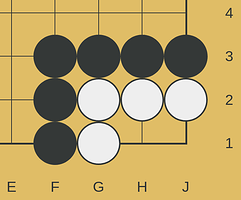 In two-player Capture Go, White is alive (until later forced to fill in the eye for lack of other moves), since Black cannot play inside without being captured first.

However, a third player, that is doomed to be eliminated anyways, might play a stone inside in order to eliminate White next. This leverage could possibly be used for gain some compliance from White to play to save that third player.

I’m a big fan of capture go, but have found that multiplayer variants are usually not my cup of tea, so I don’t know if I should sign up for this or not

How about a quick (possibly live) 4-player test-game on https://go.kahv.io/ to see how it plays out before starting something long and crazy?

For an initial game, I hoping for at least six players, and ideally more, in order to ensure maximum chaos.

I do have another idea, depending on how the initial games with these rules pan out.

What about another variant with a slightly different goal and determination of the winner. What about

The first player to capture a stone is the winner

That could be interpreted in a couple of interesting ways in theory. Maybe one could still allow suicides for a player to lose and be eliminated but not end the game, and one has to capture a non-eliminated players stone or be the last player left.

Or one could forbid suicides and the first to capture any amount of any number of opponents stones is the winner.

How about a quick (possibly live) 4-player test-game on https://go.kahv.io/ to see how it plays out before starting something long and crazy?

When a player is eliminated, the rest of their stones remain on the board until captured.

Who is eliminayed when stones of an already eliminated player are captured?

I also assume so, but this second rule made me unsure.

I think that’s poor wording then. I think it’s intended to be an informal proof that the game will be guaranteed to end, with an implied clause that a dead players’ stones being captured reduces their total number of stones, thus eventually leaving only eliminating captures left.

Well if it works the way I’m thinking, then every move either eliminates a player or increases the number of stones of uneliminated players, proving that the game terminates.

So who would be available for a live test game right now or in the next few hours?

Cool, let’s do a game at the time yebellz suggested with me, @yebellz, @Civilian and @_Sofiam

How do we manage this on that site? Can a single player drop out when “eliminated” or just need to enter passes?

I will setup the game, no account is necessary to join, but it’s good to enter a nickname in the top left so we know who is who.

All set and ready to go, just waiting for @yebellz

There is an undo button for future reference.

This should make for an interesting game, at least