It’s been a while since a rank comparison had been made. There is the couple year old OGS survey and the Sensei’s ancient comparison table, but since then quite a few changes have taken place. I thought it might be interesting to try to get an updated look into the relationships between the ranks of various servers, especially given possible effects of the recent changes, such as the new OGS ranking system, new servers and the rise of strong AI.

I tried to keep the form as simple as possible. It shouldn’t take too long to fill, so if you haven’t seen/taken it yet, please do. If you have taken it already, please don’t retake it. If you’d like, also share it with others. Every answer helps to make the resulting estimates more accurate!

The results will be published in a week or two from now (in the form of plots/tables/raw data).

What is your rank on various go servers?

The purpose of this survey is to compare the relative strengths of ranks on different go servers. Please enter only the ranks of accounts you feel are relatively up-to-date with your current skill level. Ranks should be based on 19x19 games (except...

Nice idea. Maybe mention that the ranks should all be as recent as possible?
(I’m not participating b/c my KGS and EGF ranks are both older than three years.)

Also, are you only posting it here?

That way you could potentially reach ~10.000 people or more (of course only a small fraction would participate).

I originally posted it on /r/baduk a couple of days ago and someone from there shared it on the Facebook group. I’ll see about sharing it further depending on the number of responses I get here. I’m not really active/familiar with many of the online communities so it would help if people also shared it on any of the ones they know.

I really like the idea, unfortunately I’ve been playing in OGS only for the last 6 months or and only correspondence games so I can’t really submit a reliable rank comparison. But just for the sake of it I’ll try and play a few games these days both in IGS and KGS, see if we cam update the rank table

someone from there shared it on the Facebook group

Apparently not in the large group I linked to, so I shared it there … and also on L19.

There was a thread with just this premise a couple of months ago but it came to nothing since there wasn’t a Google document. If any stumbles onto it, it should probably be closed and the last post directed over here.

You can check your EGF rating on here. Just search your name (surname forename) in massive list with ctrl+f.

Where can we check EGF rating?

And what is EGF?

There is an automatically updated list of all EGF-rated players, of which there are about 6,500. It’s a simple list, on a single webpage. I meant to link it, and now I can’t find again… derp.

The German dgob.de has a ‘ratingliste’ at http://dgob.de/rating/index.php but it doesn’t work with my Firefox for some reason.

Edit: I answer your questions and bugcat gets the like? Wut? D:

Edit: I answer your questions and bugcat gets the like? Wut? D:

Being unable to view the results, and not having achieved a stable rank on any server, my impression is:
[Fox<=WBaduk<=Tygem]<=AGA<=OGS<=IGS<KGS<EGF at the moment. I’m currently slightly overrated 4d here, 4d? on IGS, having very little trouble on Tygem vs 3d players (except for when I’ve had a drink too many), but in the past I’ve had decent trouble beating KGS 3d. Several other people’s various accounts support my impression of OGS ~ KGS+2 and AGA ~ OGS/IGS+1-2. EGF is all over the place. Some are 5d Tygem, 2-3d KGS and 1k EGF, others are 1d OGS and 2d EGF, 4d OGS and 3d EGF, 4d Tygem and 2d AGA, 6d Tygem and 3d EGF,…

I don’t know how it is at dan level, but at low SDK OGS ranks are definitely stronger than KGS. It’s common to see a player at 10k or 11k OGS posting SGFs for review from KGS where they’re holding a 7k or 8k rank.

It’s almost two weeks. I can’t wait for the results! 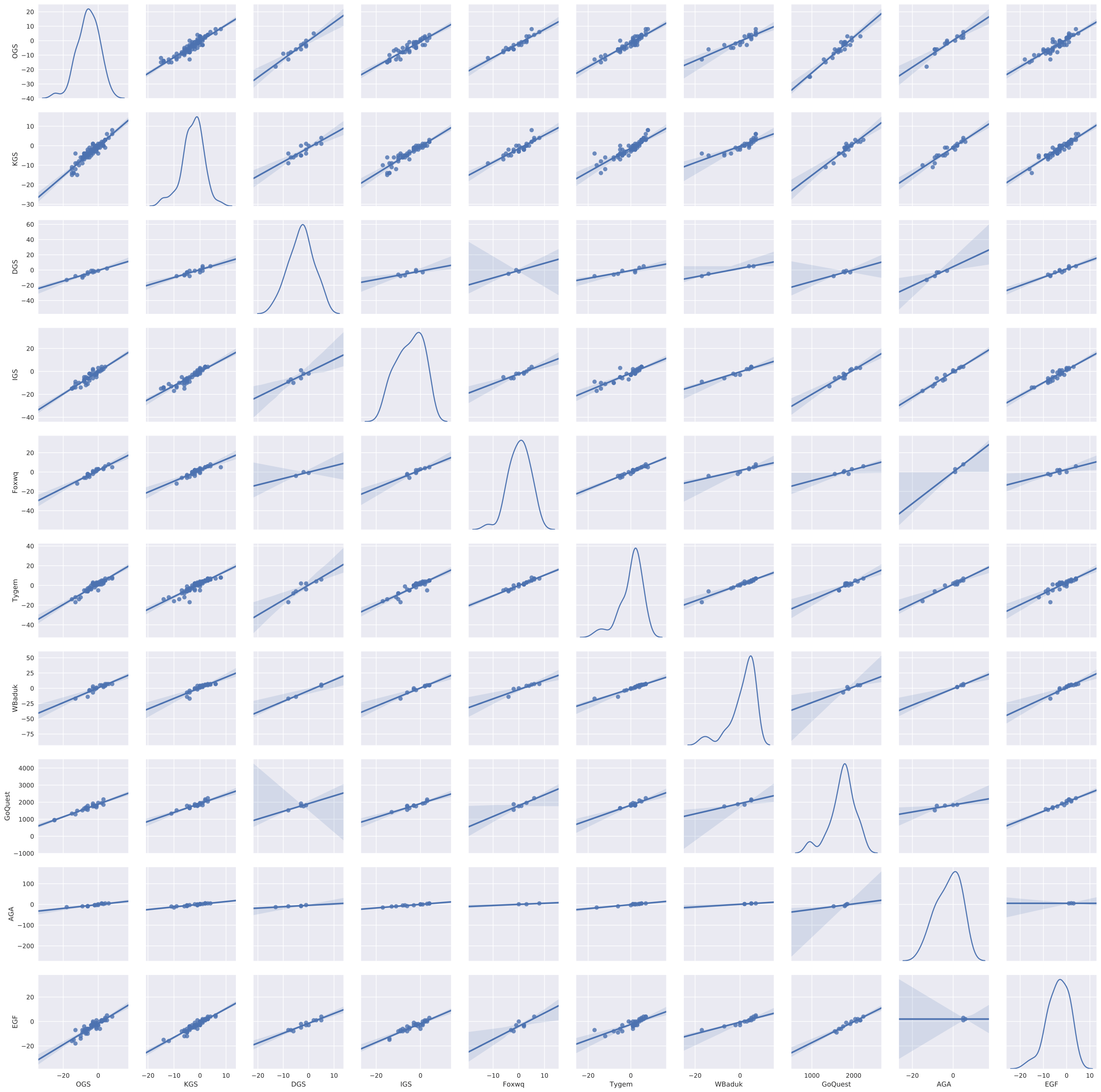 I assume the diagonal just plots the frequency distribution… but without LABELED AXES.