There are many well-known go variants, such as capture-go, sunjang baduk, Tibetan go, hidden move go etc. All are really fun and educational, but there’s not really any good place where people could play those online.

OGS does help a little bit by letting us create custom demo boards and forking them, but main thing are different rules and counting methods. Like making capture-go end with first capture or ignoring the internal stones while counting territories on sunjang baduk. Of course on those games ppl can just ignore servers counting and do it like manually, or resign when some simple “white to make living group” kinda thing happens, but this is usually really awkward and can leave wrong winner on players game history xD

I don’t know anything bout coding, so I have no idea if those rulesets could be done by “simple tweaks,” or would @anoek and @matburt need to rewrite half of playing system. After all we already have a set of few different rulesets, so it can’t be that of a big hassle…? So question fordevs, what do you think it, could it be done within some reasonable workload?
But I do know it would be super hyper ultra awesome to have those as OGS’s next big thing :3

Are there anyone else who would love having these kinda variants on OGS, and what variants you people would like to play here?

And even the Play tab looks like it’s yelling for sixth blue button with “Variants” on it!

They would have to be very distinct. I know i often don’t particularly notice if I playing Japanese rules or Chinese rules. Since they’re so similar that doesn’t matter too much. But if I was to start a game of capture go and lose because I didn’t realise that would be upsetting.

I 100% agree it would be awesome to have all the listed variants available on OGS but it would need to be clear (perhaps remove the option for such games to be ranked?) that they are a variant.

As a former professional “enterprise” programmer, but one who is not familiar with the code used for our OGS site, I am quite certain that these ideas are not ones that you easily implement with just a few changes in the programs used.

Nevertheless, it would be a unique feature for OGS to offer sometime in the future. At present I imagine that our coders are very busy implementing new features, correcting bugs, etc. in the current code. But these ideas can always be added onto a waiting list – just don’t expect results very soon.

I also agree with @BHydden that it needs to be very clear that a player is not playing a classic version of Go. In fact, I would think it best to have a completely separate “Play” page and display for these variants.

This topic got way too quiet way too soon… So Does that mean people are not intersted on having different go variants as templates?

I’d play the occasional game of hidden move go if it had an elegant implementation… and capture go might be a good idea for attracting younger players…
but i still think the standard variants should be the primary focus.

I would love to see some of the variants… Hidden move GO is very fun! DANGO would be nice to have on the server also!

I appreciate GO but sometimes a little change is nice!

Are there anyone else who would love having these kinda variants on OGS, and what variants you people would like to play here?

Yes please. I would like to be able to play on the surface of a cube with the usual rules. Sixteen or sixtyfour points on each face. No points on the edges. I imagine the board spinning mesmerizingly on one tip.

I know it’s not in near future but a special specification language would be interesting. When I read the word “template” in title, that’s what I thought would be discussed.

(I do think the ability to play anywhere in 2nd Thue-Morse turn is overpowered.)

Reminds me of playing user-defined cube in Xmage.

They would have to be very distinct.

One idea is to give separate rating for each major variant like in Pokemon Showdown Ladders and to leave other custom variants unrated.

One idea is to give separate rating for each major variant like in Pokemon Showdown Ladders and to leave other custom variants unrated.

Well we used to do this for different board sizes and game speeds but the general player base successfully petitioned to have them all combined into one overall rank so that players who were, say, 4d in 9x9 blitz, couldn’t then play ranked as a beginner in live 19x19

Arguably since changing to glicko this is less of a problem, so it could be revisited, but it’s worth noting there has been significant past push back against the idea of split ranks

Maybe for some variants with a fixed board setup one could create a demo board, link it somewhere like the forums, and then fork it to play with someone (does sunjang baduk have a fixed starting position?).

Maybe some variants could be added to the wiki post here Go Variants (Group) supposing that the variants group say became a centralised place for playing variants (short term I mean before any major changes could be implemented to allow new variants properly).

Have y’all see this work in progress?

I did see it Go variants server but actually at the time I didn’t notice all the game modifiers! 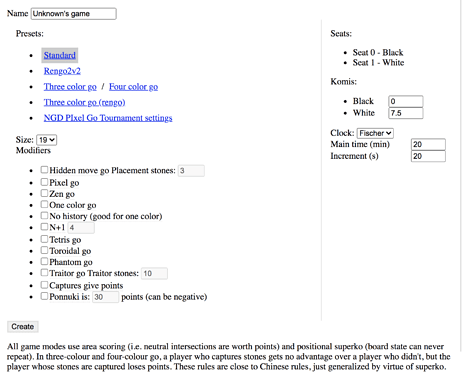 I remember reading on Anti Tormanen’s Blog post https://www.nordicgodojo.eu/post/260/go-variant-server that it had three colour go and pixel go and seeing on the site that there was rengo, didn’t notice all the other options.

Are any of them new I wonder?

Yep! When that blog post was written, we only had rengo, three color and pixel go if I remember correctly. Not even clocks.