I’ve tried looking through posts mentioning handicap, but there are too many to sort through, so…

I decided to try playing with handicaps because I’m getting a bit tired of either super simple games or super difficult games. I tried rank restricting for awhile but it seemed to make it a bit more difficult to find games it still seemed pretty lopsided when playing beginners. So I turned on the handicap system.

So I’m trying to figure out what is supposed to happen. If komi is normally 5.5 points, that means I was 3 points behind normal in my first game and he got 2 handicap stones and that is from a 5k spread. In my last game, it was still a 5k spread but my opponent was only 1 point behind normal and I got no starting stones.

Can anyone help me make sense of this? It seems pretty out-balanced but I’m not sure what’s supposed to happen.

not sure where the handicap points are coming from. Generally a handicap is just if the player gets stones on the board first. When the game has a handicap, the komi is usually only .5 points just to avoid a tie instead of 5.5 or 6.5 in an even game. you can play around with reverse komi as well to handicap, but it looks like all those games were just normal komi, and since the handicap was 1, that is the same as just black going first. There shouldn’t any additional points added at the end as a handicap… not sure if that answered your question or not.

I’m not sure I understand. You’re saying a handicap game would look like:

and that’s it? Also you mentioned that all the games had normal komi, but they had 0.5 or 3.5 which isn’t the normal 5.5. I guess my real question is since OGS is using some combination of handicap points added to the score, reduced komi and additional stones on the board, how are they determined? Or maybe if you simplify the quesion, does OGS handicap system work?

Not sure how OGS calculates handicap on 9x9 tbh, but there are two forms of hc:

‘1 Handicap’ means it’s not enough to warrant 2 stones on the board, so it’s reduced komi.

That’s only 1 more k than my third game and I got 2 stones on the board compared to 0. I think I’ll just turn handicap off and restrict rank instead. Handicap system seems broken.

You can use handicap stones on 99.
One handicap stone is said to be like 10 points advantage you give. On 99 or on 1919.
So it’s your choice, you give 2 stones for example or you give 20 points in advance. If you give both at same time it will be like a 4 stones handicap, which should be the maximum I guess due to the small size of the board
Btw a few years ago when the bots were still weak we saw handicap games given by pros to them on 99

There’s no such thing as ‘handicap points’.

You mean in OGS system? You can’t give a reverse komi?

Under AGA rules white get 1 point compensation for every handicap stone since 1 stone is already 1 point under area scoring. I don’t know how other rules handle it, but OGS gives white this compensation points under Japanese and Chinese rules as well. 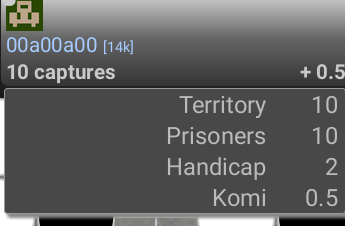 I don’t think so.
Case in point: 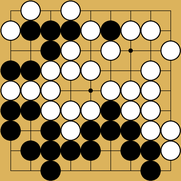 No ‘handicap stone compensation’ there. But it was self-chosen handicap (though I don’t recall picking negative komi…), so I’m giving you the benefit of the doubt.

I’m currently testing ‘automatic’ with CJ, will let you know if that changes anything.

OK. I assumed that since OGS showed that compensation points in the score-dropdown, they are counted. But actually they are only shown to confuse anyone.

As I’ve said before “Handicap 2” does not mean “handicap points”. It is literally just an indicator of the ‘difference in stones’. If you’ve got n handicap, that means there are n stones on the board before white gets to make a move.

I’m not familiar with AGA, but to my knowledge, no other rules have this kind of thing. The only compensation w might get is komi, though from my point of view, the only proper handicap komi is 0.5. Either you’re strong enough to give another stone or you’re not.

I’m very biased here because that’s how it is on KGS and I’ve never bothered with other systems.

Handicap stones are otherwise worth a point more under area scoring than territory scoring. In AGA, the handicap is only added to white’s score if area scoring is used, in order to keep the final total the same between scoring methods.

I agree about all this (Chinese counting…)
Now I was just talking on something else, when instead of giving 2 stones you give 20 points (called sometimes reverse komi)

I didn’t play any handicap till now here, so I am curious if it’s something possible.

The idea is not that stupid, for example with a 9 stones between pros, you see like 20 points for w and 120 for b in scoring…

So instead of putting 9 stones you can give a reverse komi of 100.

As I’ve said before “Handicap 2” does not mean “handicap points”. It is literally just an indicator of the ‘difference in stones’.

I believe smurph is correct with regard to OGS, the rule sets notwithstanding, because this game, https://online-go.com/game/15060284, shows 2 alleged handicap “points,” but they are not counted in that game’s final score.

The problem with the idea that the handicap points are just the differences in the stones is that several times that was not actually the case. In my 2nd and 3rd example games there were handicap points but no stones on the board. I do agree, though, that now that I add up the scores, the handicap point is not included in the final score. Seems like a bad design to me to show it in the score window if it doesn’t impact the score. Of course, my games were Japanese, not Chinese so maybe it affects the score in Chinese.

“If you’ve got n handicap, that means there are n stones on the board before white gets to make a move.”

I think in Japanese scoring you don’t add a point for each handicap stone.
Not sure how that’s managed on OGS

Yes, in japanese there is no point for placed HC stones. (but it is still listed in the hover menu to confuse players and I guess because it would be a pain to have a special hover box for each rulesets)

In Chinese there is an actual point for a HC stone and AFAIK the result is counted correctly, however, may confuse the score estimator…

I agree that “Handicap x” shouldn’t be listed in the hover menu (never used that, actually), game info is wholly sufficient.