The others are crap and the conversion rating->rank doesn’t work for them.

Interesting. Can you elaborate on why they’re crap and conversion doesn’t work for them?

If I was to guess, it’s that maybe you can make it to being a dan player on 19x19 having not played much 13x13 or 9x9, and while you might not be sure of the nuances of the smaller board, your life & death skill is still probably very strong so you probably wouldn’t be fairly classed as a beginner rank with people who potentially only play 13x13 or 9x9 say and have a much lower rank at those.

Something along those lines I imagine.

The only reason I can think of is that the scaling factor OGS uses that was derived experimentally (from 19x19 games? a mix?) (31.25*log(rating/850)) doesn’t translate well to specific board size/time categories.

I guess you’re looking at it from a point of view where the rating to rank conversion isn’t as accurate for various time settings/board sizes.

I’m looking at it from the point of view that there might not be enough data points in each category to get the rating to be in any way accurate in the first place, never mind the conversion

I suppose that’s meant to fix itself over time with more data points.

Say though there’s a big tournament like the ogs ones honinbo minigren etc. that are correspondence and you mainly play live games, it probably shouldn’t take your correspondence rank but instead your live or overall one if that’s going to be more accurate.

All ratings are calculated independently, therefor there is at least an offset between the different categories. The conversion formula was derived for overall/overall, so it works only there.

From everything I’ve been told and have read, OGS uses the overall rank for all pairings. This seems to be confirmed within the FAQ:

Next to your profile avatar you can see your Rating .

By default your rating is unknown and will only calculate after you have played some ranked games (usually about 5 are needed for a decent estimate). We provide ratings for different board sizes and time-settings, but for the purposes of matchmaking the overall rank is always used. The rating consists of two numbers - the first number is your rating points (the bigger the better) the second number is “give or take” i.e. your possible deviation from the first number (the more confident the system is about your rank the lower this number will be). Below these numbers is a graph of your past progress (blank until you play some games). You can “zoom-in” by dragging across a desired time period on the timeline.

Does anyone have another explanation for the odd handicapping I observed? I’m inclined to go ahead and file a bug.

This table, what are the equivalent stones for Black to convert between Komi vs extra stones for 9x9? Thank you.

Most systems give ~13 points per stone, this is the same on 19x19, 13x13, and 9x9. Think of it this way, the value of a move is roughly the same on each board size, but the number of points up for grabs in smaller, which means 13 points is worth more on a smaller board, so each handicap stone matters more on 9x9.

The only difference between what I just said and the table I pasted is that it gives 5.5 komi for an even game, which is different from some other systems I’ve seen. I believe OGS for example uses 6.5 komi on 9x9 board even games.

Thank you. So each stone is worth 13pts but the scale changes at a different rate. Thanks that is really interesting explanation.

I believe computer analysis determines 6.0 to be the optimum komi at least on 19x19. With 0.5 added to avoid drawing, from what I read.

What is the equivalent points difference that would be expected; for 9x9 board? It’s useful how you have a conversion for rank difference = stones for handicap = komi for handicap (W). I wonder how points would look on that (at least average expected) if possible?

Thank you for your answer above in any case.

Based on the chart linked above the equivalence would be:

That’s amazing help thank you. My screen is probably too bright with this white background so that may have prevented me from reading the relationships in your table more accurately tbh, so thanks for indulging me with an answer, but the little summary is perfect for clear understanding.

I’ll be stumped, I never thought to check the relationship between 19x19 and 13x13 and 9x9 they are “very close to being half of each other” is what you mean and hence the relationship association.

I guess I’m here to have fun and play baduk which means leaving my brain at home!

The category name top left should say specifically for clarity “rank difference of WHITE vs black” eg white starts as no difference and gets full komi then gradually becomes the stronger playing partner.

Finally, where does this chart come from? It is from a large data set of games? It is really really helpful for understanding the general relationships going on between colours and ranks and achieving successful balanced handicap games between players. I will correct my erroneous custom 5.5 komi I learnt from a book, now. Thank you again.

I don’t quite recall where I got the chart, and it may not hold up empirically. I mostly pasted it as a point of reference for discussion.

However, I would be a little surprised if anyone actually has a good data set that could be used for the purposes of revising the chart. It’s hard to get a large data set of games played by strong players because generally strong players prefer larger boards. The problem with using data from weaker players is that their strengths are changing rapidly, and their results are more prone to being decided by luck.

My screen is probably too bright with this white background

FWIW, it’s possible to have a dark background.

I guess it’s never exact for a number of reasons:

I tried the dark theme but GIANT symbols ended up swamping the screen and not functioning! I just dimmed my own computer’s brightness for the time being. But I use the dark mode for games and it works, so thanks again.

That sounds odd, I’ve never seen or heard of anything like that… Could you take a screenshot of it? 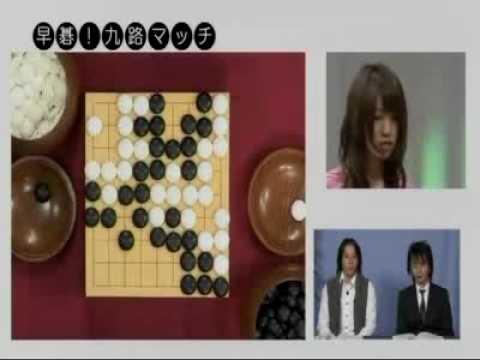 There’s no other Go content on this channel, to save you the trouble of looking.