How did you find OGS?

I once was shown the alpha go documentry and then was intrested in go. I watched some video’s and they recomended OGS to start.

I found it using the internet and google. I don’t remember what I first searched to find this site though.

I started trying to play Go when my (young adult) children took an interest - my son got a board for Christmas.

I looked around for online resources to lean and play, and tried a number before OGS actually, including the “big three” of the time (KGS, Tygem, Panda). I found the user interface and community experience of those to be completely woeful. Then I stumbled across OGS and never looked back.

When i just typed “Online Go Server”. Nothing adventurous.

First I was starting to play go from finding it on a board game forum, and tried to play it online since I wasn’t getting many irl opponents, so I searched around and first came across KGS, which at the time I couldn’t use because of certain installation restrictions on my fam’s comp, so I kept searching and eventually found OGS

I was at a meeting of my science-fiction book club in, I think, summer of 2016 when one of our members came into the community room and said some people were in the reading room playing go (the way you would say, some people are out there standing on their heads). I was thrilled because I had loved go some 50 years earlier, but drifted away from it for lack of opponents. After the meeting, I went out and talked to the players and have played with them ever since. I learned about online go from them, but didn’t want to play on KGS because I don’t like the idea of downloading the needed app. A few months later, one of them was touting OGS because it did not require any download. I signed up immediately.

I have only played on KGS + asian servers before i was told OGS existed
The story was I was playing shogi on 81dojo one day and met a guy(forgot who it was, too along ago) then we chatted about shogi and eventually mentioned go.
He told me KGS is already dead, OGS is like the new popular server nowadays, so yeah, I was skeptic at first then found the site to be pretty decent, though I pretty much play on Fox nowadays but i still lurk around on OGS forums lol

I can’t think of any other way I would’ve ended up on OGS over other go servers (other than the obvious of it being convenient to play in browser rather than installing things).

Plus iwtg was the first thing a friend recommended me to work through when they were showing me how to play.

The very last section, section 35 ‘Epilog’ has links where to play go, and OGS is top of the list.

For me because I was bored at quarantine .Then I found this site and now I treat it like brawl stars

I was playing chess and chatting with some guy, who asked me if know how to play go. I had learned the rules and played few bad sub-30k games around 06-07 after being inspired by HnG, but didnt really understand the game nor had the time to invest on playing go. So i decided to pick up the game again and see whether i could now learn any better at it.

I remember that i googled smth like “play go game” and first hit was kgs, their site looked really out-dated and scary (not sure but i think their landing page had some flash crap xd). I took a step back, checked the second hit which was ogs, made an account, started playing games, and got hooked ^____^

There was a time when I used to collect Go Servers like they were some sort of achievement. I had them all, even the obscurest ones (GoShrine, PlayOK, YourTurnMyTurn, you name it).

When I found OGS it was a relatively unknown correspondence-only go server. I was rather disappointed with the environment at KGS at the time, so it became my favorite server.

Here’s a snipped I found on Wayback Machine. A few things to note from it: 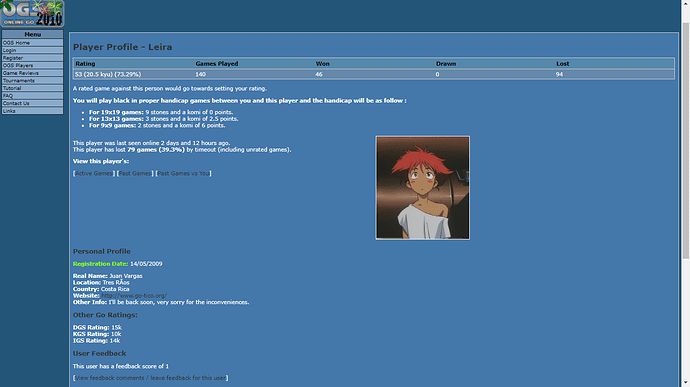 I began playing Go with my dad when I was about ten or eleven years old. We only played one game as it seemed really confusing and we just read the rule book. Secretly, I kept a slight interest in the game after he had given up entirely even though he told me that it costs money to play the game online. I was extremely thrilled with this terrible server and it is where I started playing because you don’t even need registration. Eventually, I found OGS when going to that site by means of Google and bravely signed up. And here I am today, OGS is still my favorite server even though I play on most of the common servers. I haven’t played much lately because of real life but I have no doubt that I will come back and seriously study this game again, hopefully soon!

About me, it’s actually funny how I got to knowing Go overall. I saw it in a couple of places: in movies, like a beautiful mind, and in anime. I found its aesthetics interesting but never knew how it was called.

At my computer I would type “Go…” and the first thing to come up was google, so if I wanted to go to google’s home page I would just type “go+enter” and the site google.com would automatically complete. One day, around 6 years ago, I was at my ex-gf’s house, and they had this thing where they would always clear history and caché so the PC would run better (???). So, I was using their computer and did my automatic “go+enter”, except this time, without bookmarks or history, it looked up for the word “Go”. I looked at the screen and the first thing to pop up on the right was the wikipedia article for Go. I was so happy, I finally found out what this game was, so I wrote it down (I was an idiot for being happy, since I never got into the trouble of actually looking for it lmao)

Later that day, at my house, I looked up for the key words “Go online”, since I knew there had to be servers like this. OGS might have been my second or third attempt, I didn’t like the interface in the other servers I tried before this one. Since then, I think I’ve only played here, I tried at a time maybe 10 matches in KGS when I felt the urge to play fast live games, and they weren’t as easy to come across here, because of the ammount of players.

clear history and caché so the PC would run better

Your story is beautiful, though!

I used to play on other servers but I had difficulties connecting to their server with an app client, so I looked up a web-based go server, I started playing on playok, flyordie and funnode but OGS has more active players.

I searched for “online go servers” on Sensei’s Library because I didn’t want to download the bloated Java program required for KGS. Which, in any case, is distributed as byte code only, so you can’t really know what it does (same thing goes for the IGS and Tygem clients – huge security risks).

It is great that OGS can run as a sandboxed Javascript SPA in a web browser.

I got info on the merge with kaya, So I came to see. Then slowly I came again and again, mostly for the forum. I use to play a bit eveywhere.

I think I searched up Go puzzles, and clicked on OGS (for the puzzles). Later, I was interested in the Ladder aspect, and set up an account,

i had a funny experience: before this year i played go a long time ago, like maybe ten years ago and only a little bit not seriously. but earlier this year around when i started again i was chatting to my board gaming friend who plays chess, and they said, “i like that online go dot com doesn’t make you give them an email address” and in my head i was thinking, “online go dot com? that sounds fake, kgs is where everyone plays”

well i had a pretty outdated idea. fast forward a few months and here i am