How do you find players to play in real life

Ok, the title might sound stupid, but seriously: I’ve tried to show go to my friends and either they don’t get it at all or they give it a try but then afterwards it’s like “yeah, whatever”. At work, no-one has even heard of the game, even though there were some chess players.

The only way I ever found live games was by going to a public go meeting, but theyre irregular and right now, due to covid 19 nonexistent.

The only way I ever found live games was by going to a public go meeting,

Basically just this or tournaments.

I’ve tried to show go to my friends and either they don’t get it at all or they give it a try but then afterwards it’s like “yeah, whatever”. At work, no-one has even heard of the game, even though there were some chess players.

Basically the exact same whenever I try.

I founded a local group. Looking purely at the number of people attending regularly it wasn’t a big success. But those few players that do turn up are extremely nice people, so it was absolutely worth it.

During the pandemic? Forget it.

It largely depends on what continent / country you are on. If you are in Japan / Korea / China - chances are you can find someone at a public park.

Anywhere in the West - it’s going to be a a needle in a haystack because Go players are so few and far between. As such, getting connected with a Go club and seeing if they have some kind of COVID-safe activities is your best bet for making contact with people in your area.

Once you meet those people, you can try to make your own arrangements for playing outside the context of that Go club - but that’s about it…

Talk about Go to anyone and everyone you ever meet. Most Go players don’t talk about it cos no one had ever heard about it but I have found at least 3 people in a ten year period this way, which I think is pretty good going.

Also set up a Go club - if you can get one other person attending regularly it is a glorious success.

What country are you in? Your go association might be able to help.

As I said, there are go clubs here (Germany). But due to covid 19, they’re not active right now

Maybe contact your local Go club, see if they have an e-mail list, forum, or some other electronic bulletin board, and try to post a notice there - saying you’re seeking other players for covid-safe 1:1 games?

Then, once it warms up in the Spring, maybe meet someone and play outside in the park?

Many of them meet online instead. Not the same thing of course, but that way you may get to know a few players in you area, so once the pandemic is over, you will have a few acquaintances already. I’m pretty sure they’ll welcome you with open arms.

I’m in Hamburg. Too bad that magnetic monorail was never built!

Well, then let’s meet to play in a park when the weather is good enough. (Except if you’re on the other end of the city, then maybe not.)

A big city like Berlin is sure to have a Go club, so try to find it. If not, then it should have one; and sounds like you have two founding members, so set one up. That was my friend’s attitude when he moved here: “What? No Go club? I’ll start one then.” Now we have a core of long standing regular members and new players come and go.

One good source of new members is universities - there may be a student Go society that you can join as a non-student (as is the case with our Go club, which is technically a student society even though we have more non-students than students, LOL).

And once you find people to play with, even if they’re not going to last like your friends and family, play in public if you can, e.g. park, library, etc. Keep a correspondence game out on your desk at work / uni, etc. We found new members this way - you know, people coming over like “What’s this crazy game?” or “OMG! Is that Go? I’ve always wanted to learn to play that”. Or one guy even was a student over from China saw us playing and said he played loads as a kid in China but hadn’t played for years, so we rekindled his interest, which was great.

And lastly, link up with Go clubs in neighbouring towns / cities as they may be near enough for occasional inter-club meet-ups, people might move house / job and your club becomes convenient, some people even don’t mind to travel (as was the case when we were blessed with a Japanese 5 Dan who travelled to us each week).

Other than that, just keep looking. Go players may be few and far between but they are out there; so if you look, then you will find them.

I’ve heard about this site, but I haven’t really used it myself.

Your home for Go meetups

Those are good points. I have one additional that I tried: I set up my computer background with a nice game. So every time I give a presentation, everybody sees the goban with stones on it. Some asked already what it is, but no-one followed up on it after I explained it

I tried a huge poster in my workplace. I did get a couple of “What’s that abouts?” but I haven’t caught an actual Go player yet.

Um… was that meme the poster?

Maybe not the most effective way to advertise the game 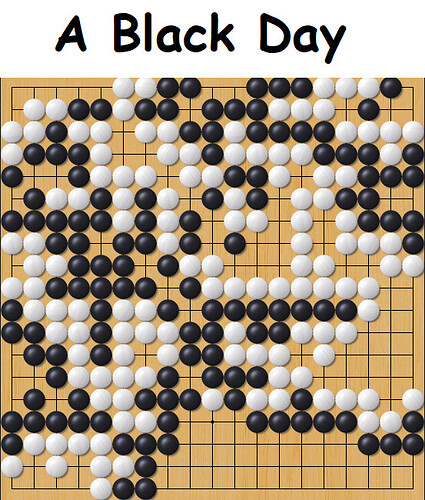 It looked something like this except much cruder because I was playing out the correspondence game at work and the title was added once the game finished.
The Game: Play Go at online-go.com! | OGS