How is the game scored

I am a beginner. I just had a game where I was surrounding more territory and there were no captures but I lost. Also the numbers it said were not what I counted. Is there an addition for the player who goes second?
I understand dead tiles are counted for the opponent, surrounded territory is counted, and captured tiles are counted. What I’m asking precisely IS there some other numbers being added or is that it? Why do the numbers not match the territory (with captures and dead tiles accounted for) when i count it? I’ve searched the forum, and wikipedea but I can’t find an answer to this question.

Because it’s an advantage to play first, white get an amount of points, usually 7.5, called the komi which is added to it’s score. 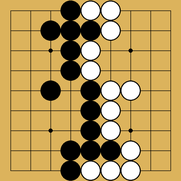 This was the game… after writing I noticed a ? over the scores which gave more detail. The komi was 3.5 because it’s a smaller board, and I had 1 prisoner. What I still don’t understand is why he got 1 point handicap when he is 19k and i am 21k

The handicap 1 is that white only got 3.5 Komi instead of 5.5. I guess the handicap was “automatic” and you were +/- 1 rank apart at the start of the hand.
In other words if the handicap were 0 you would have lost by 2.5 points.

(Edit: it’s not very clear what handicap means in the points display)

I think there have been extensive discussions about this like here

I am tired of Komi issues on 9 x 9. Where is the rule that any board size besides regulation need to grant white 6.5 points for going second? Let’s assume that 19 x 19 is the only board size which matters. When Komi was introduced, it was deemed that white should get compensation for going second. On a regulation size board – 19 x 19 – a compensation of 6.5 points represents 1.8% (0.018005540166205) of the 361 available points. With the brilliant minds who have studied the regulation size to …

That’s a point of debate, but typically not more than a point. In territory scoring rulesets (Japanese, for example), komi is typically 6.5 on 19x19, and 5.5 or 6.5 on 9x9. The first move conveys more advantage on a smaller board, but as there are fewer points available, each komi point is also worth proportionally more, so it’s basically a wash.

I am a beginner.

Maybe this tutorial can help you.

On OGS, the standard komi is 6.5 for 19x19, and 5.5 for 13x13 and 9x9. If you add up the numbers in your game, you will see that your opponent did not get the 1 handicap point. Handicap points are not counted under Japanese rules; they apply in Chinese rules. Living stones are counted for points under Chinese rules, so if black gets, say, a two-stone handicap, then white is compensated for the fact that black starts with 2 stones (2 points) on the board. The value of a handicap is that it gives greater strength on the board. It is not supposed to convey a direct advantage in points, hence the compensation.

I am curious, what happens if black cut now at F7?

I think depending on how white reacts, black will capture either the two stones in atari or the three white stones on the top. That is probaly the reason that the computer states that black is winning.

Well no, the score calculator don’t take in account that weakness and calculate the score in the same way as the 2 players agreed.
I checked in details, see the game.

I was not refering to the score but to the winratio, wich still states that black is almost certain of victory while white is ahead by half a point in this position.