How to block [?] from accepting game request?

how to block [?] from accepting game request?

Don’t believe it’s possible. Just play them and they won’t be “?” for much longer.

Considering the amount of abandoned [?] accounts compared to active users on the site that’s not often the case.

Maybe they abandon their accounts because everybody cancels games with them?

Could you tell us why you don’t want to play against not-yet-ranked players?

No sarcasm. I honestly think wanting to reject all games from “?” players is a totally dick move. I was just trying to be polite about it.

I would like if it would be possible to create games which only provisional players can accept.

how to block [?] from accepting game request?

Short answer - on itself it is not possible at the moment. You can restrict the range where ? start but if you want to play an established 15k for example (without a direct challenge of course), there is no way that I know of. Sorry

Note: you could put “no [?] players please” in the game name. That would be better than simply cancelling out on them when they accept your game.

you could put “no [?] players please” in the game name

It’s possible, but I fear that people doesn’t pay much attention to the game name.
Some time ago I made two requests titled “very fast correspondence”… I won both by timeout.

Also it would be rather funny to read “I’m [?] but don’t want to play [?]”, even though there could be some reason to do that.

However, my renewed confidence in OGS rating system let me say that also [?] vs [?] should be useful after a while (some other games).

The initial rating is 1500 aka 12,3 kyu.
The [?] stays next to player’s name until 5 ranked games are played, but the card (when you click on player’s name) shows the rating and rank. 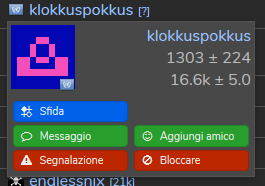 After each game you “current” rating is computed and updated.
So, a strong player new to OGS can become dan before the [?] goes away.
I actually know one.

Assuming that new Ogs users are actually newbies, they should drop in rank, starting from 13k and going down to their actual rank.
So, if you set a minimum rank to your games above 12k, you should avoid almost all of them.

I do not wish to avoid them, I wish to block them.

Out of curiosity, what makes you want to block [?] players? The only game you lost recently was against someone that’s now settled to 7k. Away from the notorious 13k rank, uncertainty decreases dramatically, and [?] players are often somewhat close to the rank they’ll end up at.

Having the option to block [?] from accepting games would have no negative implications, as the other option, cancelling the game, is nothing but a nuisance for both players.

As for the reasons why one would like to play opponents with established ranks, it’s simple; it is preferable to know the strength of the opponent.

Concerning the claim about unestablished ranks not being able to find opponents, this is unsubstantiated, and if it were true, the bots are easily available for establishing a non [?] rank.

Of course an actual workable solution is “Humble Rank”, as concluded in this long thread and raised here

I wish to block them.

“To block” a player has usually a different meaning: you’ll never see him again on the server. I don’t think that’s what you want.

As you stated, you wish not to play with them until it’s established their rank. In other words, you would publish game requests and you wish [?] player couldn’t accept them.

Well, if you set in your game requests the option “minimum rank = 12k” (or stronger) you’ll exclude almost all possibilities to play against a [?] player, because they are almost all weaker than 12,3k (they start at this rank and then fall down).

This isn’t a perfect solution, but it’s free!
Good luck with your change request.