How to win a handicap game: lessons from 1914

I’d like to show you a game I just came across that conveys several good principles to achieve victory as Black in a handicap game. It was played in the last decade of what I call the Classical Period (1820-1920), at a time when professionals were still at ease with giving and taking handicap stones.

White was Nakagawa Kamesaburo II, 7-dan. He was probably the son of Nakagawa Kamesaburo, who was one of the very strongest players of the late 19th century and was, in turn, the son of Honinbo Jowa. Black was Kubomatsu Katsukiyo, 3-dan. He would become strong in the 1920s and remain so for the rest of the inter-war period, but in this game he is receiving a three-stone handicap. 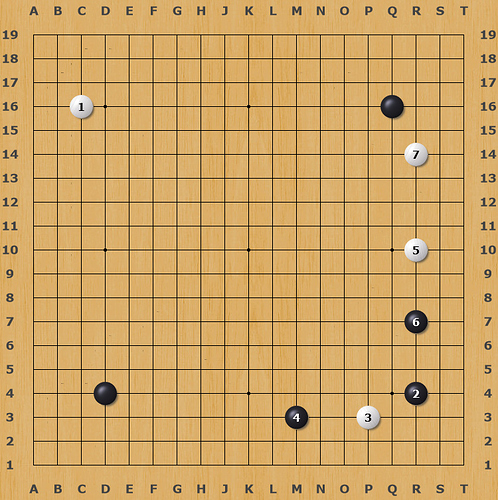 Don’t worry about the opening

The opening was calmer than in most games today. The early game at this time tended to be fairly peaceful, although that was not necessarily true for all of the Classical Period. Instead of (5) and (6) a modern player would expect moves closer to the corner, with key points at Q3 and P4 for Black and Q5 for both colours. Still, by (7) Black’s opening is perfectly solid. 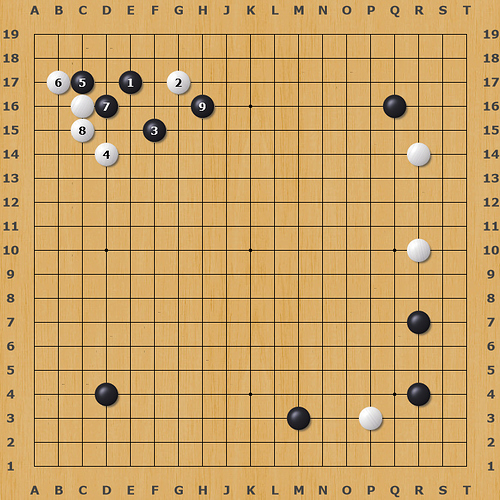 At the time, White’s tight pincer (2) was quite rare in comparison to looser two-space and three-space versions. Black could have chosen to press at D15 or make a two-space jump to E14. Instead, he stood on his own knowledge by reasoning that the keima jump (3) would allow him to transpose to a familiar shape, which is what happens. I think White could have considered playing (4) on the top side, aiming immediately at the ko shape which is the central theme of this shape (see Diagram 1 for a potential continuation.) 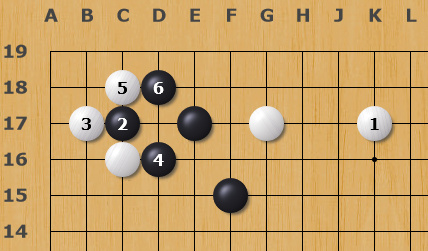 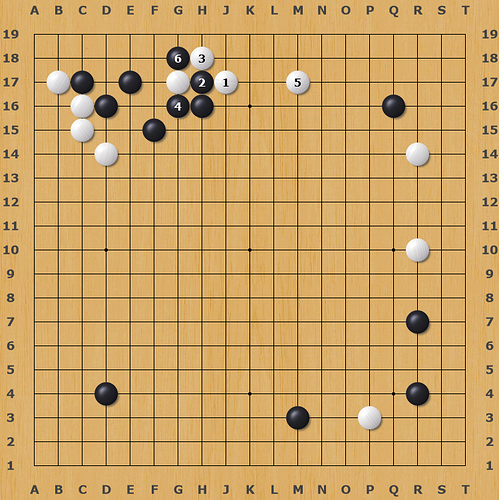 In an even game, especially one with modern komi applied, we might well criticise (6) for being slow. Indeed, White’s follow-up at F16 doesn’t threaten to kill Black or even to particularly mangle his shape – but it does deprive the group of its base. In a handicap game, White’s path to victory relies on an attack being prosecuted against a heavy, baseless group – there is no need to allow this.

Don’t be afraid to attack 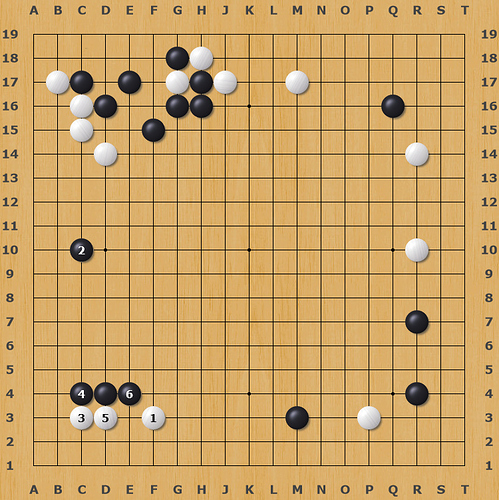 After White’s approach, a response like C6 is sound but has only local significance. Here, Black has taken note of the weakness of White’s group in the top left, and he immediately occupies the key point, preparing to remove their base. White’s entry to the 3-3 rather than a double approach is a refreshingly modern touch. You may be thinking that Black should have blocked at D3, but this would allow White access to the left side and reduce the potential of Black’s plan. 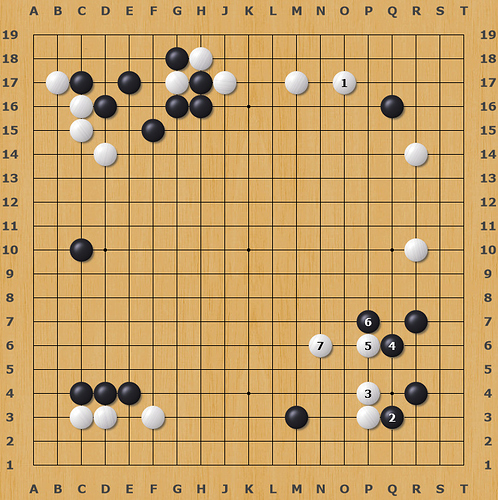 White’s double approach implores Black to respond in defence of his stone in the corner, with a move like P15 or Q14; if Black adds stones, he will then feel obliged to defend them and White will find it easy to secure his position on the right side. Instead Black responds with a very solid sequence in the lower right that secures a reservoir of points and prevents White from gathering eyespace for his stones. Especially, (4) removes lingering defects and is instructive for the handicap player.

Control the flow of the game 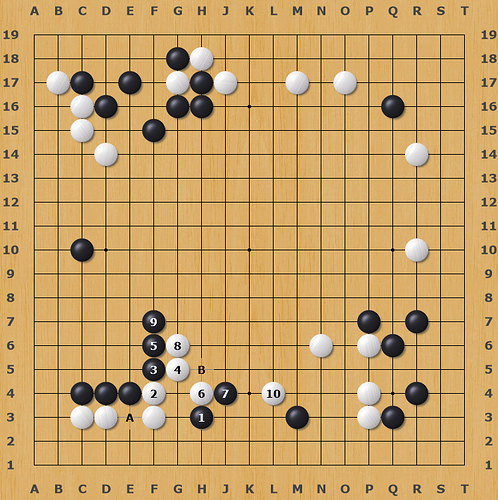 The majority of DDK players would, I think, immediately push and cut into White’s shape and transpose into a double-hane 3-3 invasion shape, taking the corner but permitting White to improve his lower-side position and even make his weak stones in the lower right useful. Or, they would push and cut at D2 instead despite the fact that White has the ladder. Again, this is unacceptable since the resultant shape will be heavy and White will again be able to improve his weak stones. (1) announces White’s shape defect calmly in a way that doesn’t permit counterplay. Note that White’s defensive exchanges at (4) and (8) build Black’s position on the left side.

After White (10), there is an interesting issue of timing which serves no didactic purpose. Black has two things he would like to do: one, to push at A and capture the corner with D2; two, to atari at B as a mild kikashi to makes the bottom side situation a little easier. If Black immediately plays the entire capturing sequence, he won’t have time to play B. So, common sense suggests that Black should play B at the beginning. However, if he does this then he actually loses the right to take the corner since White will have time to defend on the side (see Diagram 2).

The solution to this issue is to make the cut first and force a commitment from White. We can see the crucial difference in Diagram 3: the fact that the B kikashi hasn’t been played allows Black to threaten a snapback and thus gain a tempo, drastically changing the fight to come. 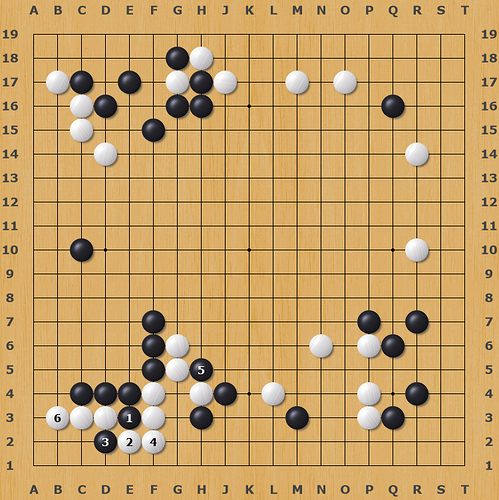 In the game, White ignored the atari and clung stubbornly to the corner. We can see that, although Black has cleverly managed the timing of the position, his “vulgar” unresolved push has still reduced the liberties of his stones. This is why we usually don’t push without cutting. Still, the fact that Black can capture H4 makes any shape issues less pressing for him. That Black captures is also instructive – a centre-facing ponnuki is a great way to manage the global position. 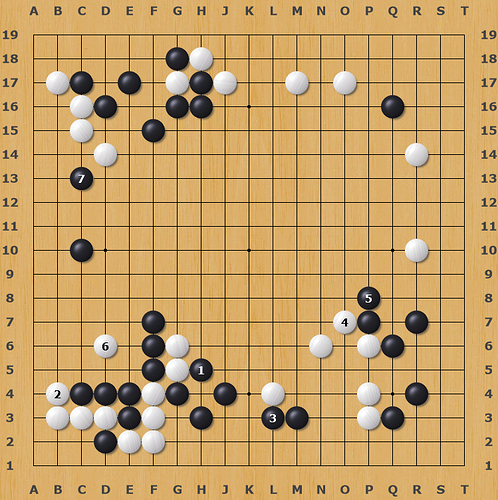 "Curl your fist before striking"

Black’s not in a hurry to continue his central plan of attacking White’s stones in the upper left, which has no doubt been in his mind ever since he played C10. Instead he snatches the base from the eyeless group. The quiet response (5) is very important: it maintains the integrity of the shape and splits White’s lower-side and right-side groups, both of which have significant unresolved issues in their shapes. (6) is a continuation of White’s initial attempt with (2) to encourage Black to defend heavy stones, but again he refuses. Now, finally, he occupies the key point. 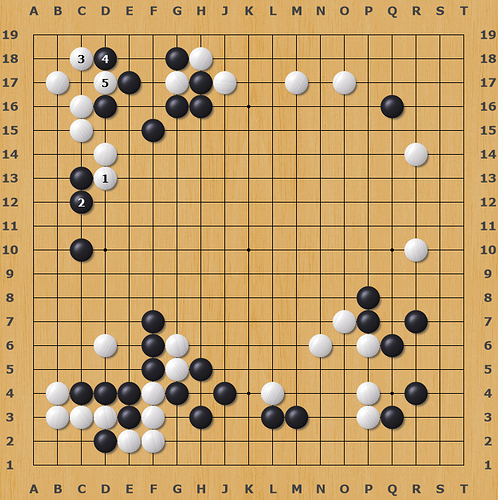 White has no option but to resort to the ko shape; it’s the only way to make two eyes for the group. He chooses the most direct ko, in which he has most to gain if he wins.

Kos are at the heart of Go. Odds are, if you can’t read out a life and death position then the result is probably a ko. And so, naturally, when playing against stronger players they will regularly find ways to exploit the weaknesses of your shapes and produce a ko, in order to settle or connect their stones. This situation is, of course, rather different as White is in a ko of last resort – still, Black was not afraid to enter this position (even though he captures second, as well.) 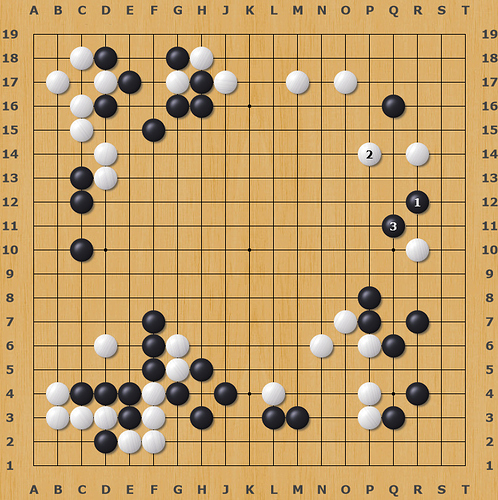 In the early endgame, remember to secure points

Of course, there is no point in any of the advice I’ve given if you don’t actually, at some point, take points. the best time for this is the early endgame, in which the status of the groups has largely been resolved and more profit can’t be made by attack. There is also a point advantage to being the one to begin the endgame, since the available moves obviously decline in value. Black’s ko threat is very annoying for White, since if he runs with the R10 stone he’ll concede a practically unlimited number of ko threats as it wanders into a hostile centre. White’s only option is to jump with (2), perhaps nursing a final hope that Black will, this time, commit to defending heavy stones. Once more, however, Black rejects White’s request and seals off the right side, collecting enough points to secure his eventual victory.

When you revive your own thread, is it an autonecro? A self-necro?

Also, I don’t remember whether or not past bugcat meant to pun on the First World War :P
I think it was unintentional…

When you revive your own thread, is it an autonecro?

No, this is an autonecro 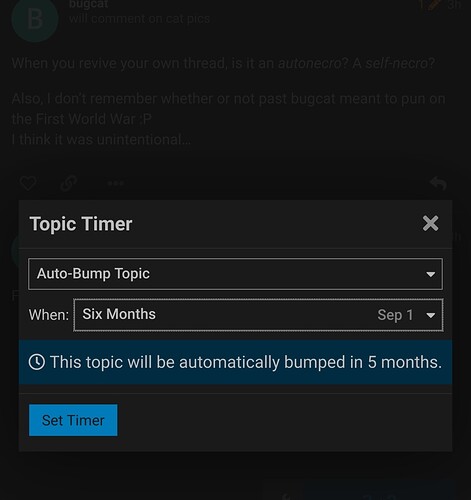 I can’t believe @bugcat didn’t get any replies to this the first time round! I found it a very interesting analysis that has given me lots of ideas to think about for use in my own games (especially as I play a lot of handicap games at my Go club, both as black and white). So thank you bugcat

Something to read for sure, that’s a high quality post and it’s never too late to thank him.

Much appreciated! It’s great knowing I made something worthwhile :3