A thread for general discussion of handicap Go and posting of resources.

I’ve compiled some past handicap threads.

5 Likes
The Meta-Guide to Forums Guides
Features everyone secretly wants on OGS but will never be implemented
bugcat May 18, 2021, 1:46pm #2

The spark for this thread was that I wanted a good place to post this Redmond video.

(that is, apart from Go videos) 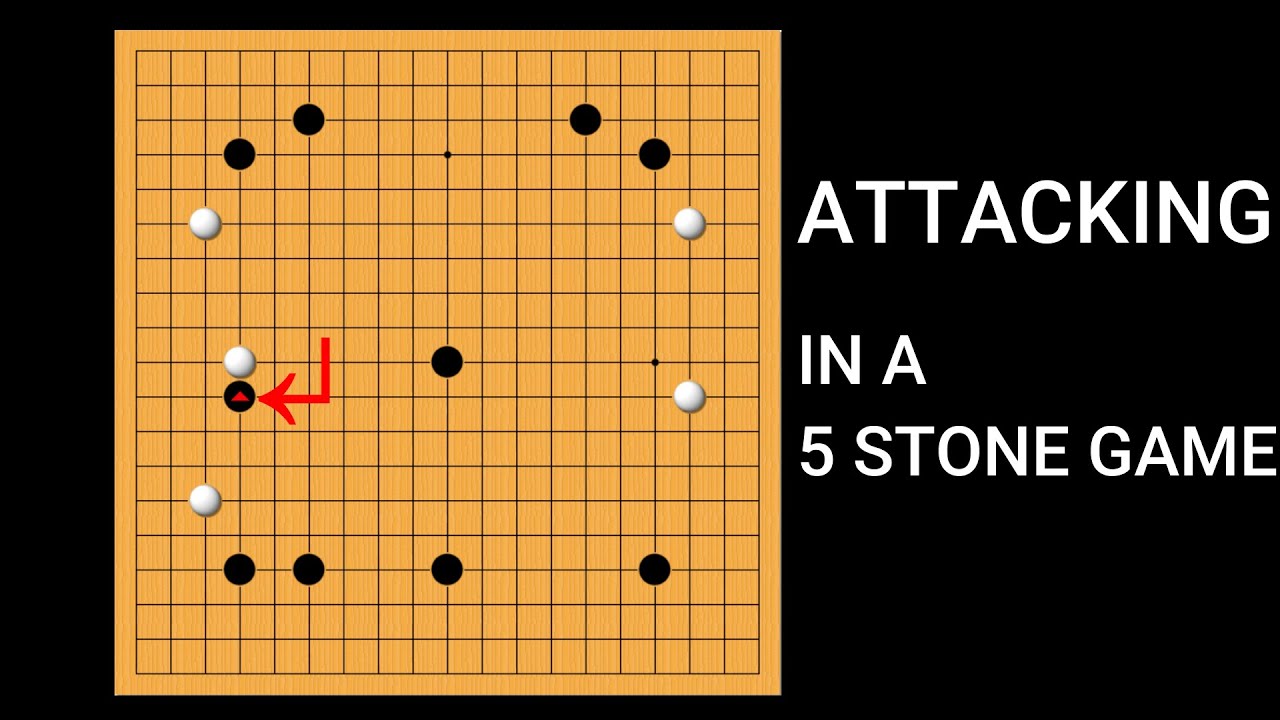 Another nice attempt to fulfill the lack of organization of this general go discussion category, thanks for your effort.

I’m going to pin it for a few days for myself, the time I explore that list.

Lagrange Points: Round 4 Underway; New Players Stay Tuned for Signups for Round 5! Tournaments

Lagrange Points: A Running Reverse Komi Arena (New Players Welcome!) Lagrange Points is here to provide you with the opportunity to arrange games with full reverse komi with like-minded individuals. With flexible commitment and scheduling requirements, it is my hope that a wide selection of people who may not be inclined or able to commit to a more rigid structure, can still participate in Lagrange Points. Reverse komi is an elegant alternative to handicap stones: instead of the handicap taker…

Michael Redmond plays handicap games against his patrons on his OGS account, nine_dan.

Handicaps for Smaller Board Sizes (SL)

See also this page I made about how OGS apparently does its automatic handicap calculations and please add information or corrections if you have any!

So the third column of the 9x9 and 13x13 is telling me what komi is applied in ranked and unranked games provided I choose both automatic handicap and automatic komi is that it?

It wouldn’t surprise me if some weird things happen if you manually pick the handicap but leave the komi to auto and vice versa. Although you probably can’t specify the komi in ranked.

I think so. My data came from tournaments, which don’t provide a separate option for the komi, so I know there wasn’t anything weird like that going on. But of course it’s also possible that they could work entirely differently from individual games. 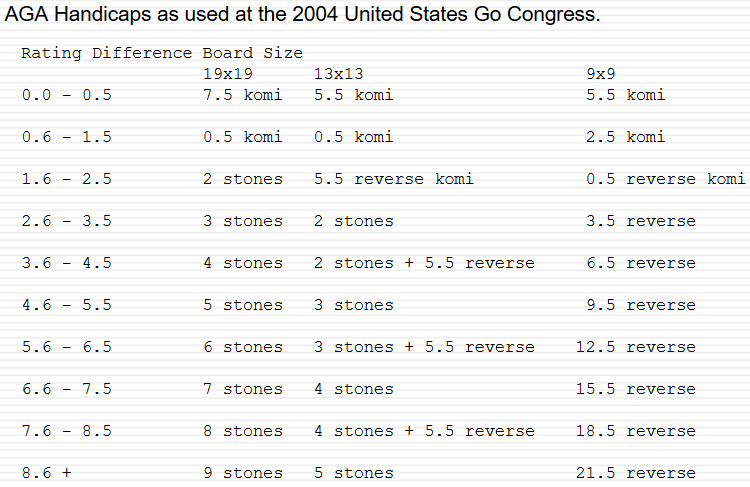 Brief analysis of a 2004 seven-stone handicap on KGS.

Player level unknown, but Black seems to be around OGS 12k.

One thing that I’ve been noticing is that I will get stuck at a six stone handicap with people. Seven is too many, but I will not be able to win at 6 for anything or we will go back and forth trading at 6–not quite to 7, but I can’t get to 5 either. Then, something will break, and I’ll drop to 5 and then to 4 very quickly. It just seems that 6 to 5 is a largish drop. 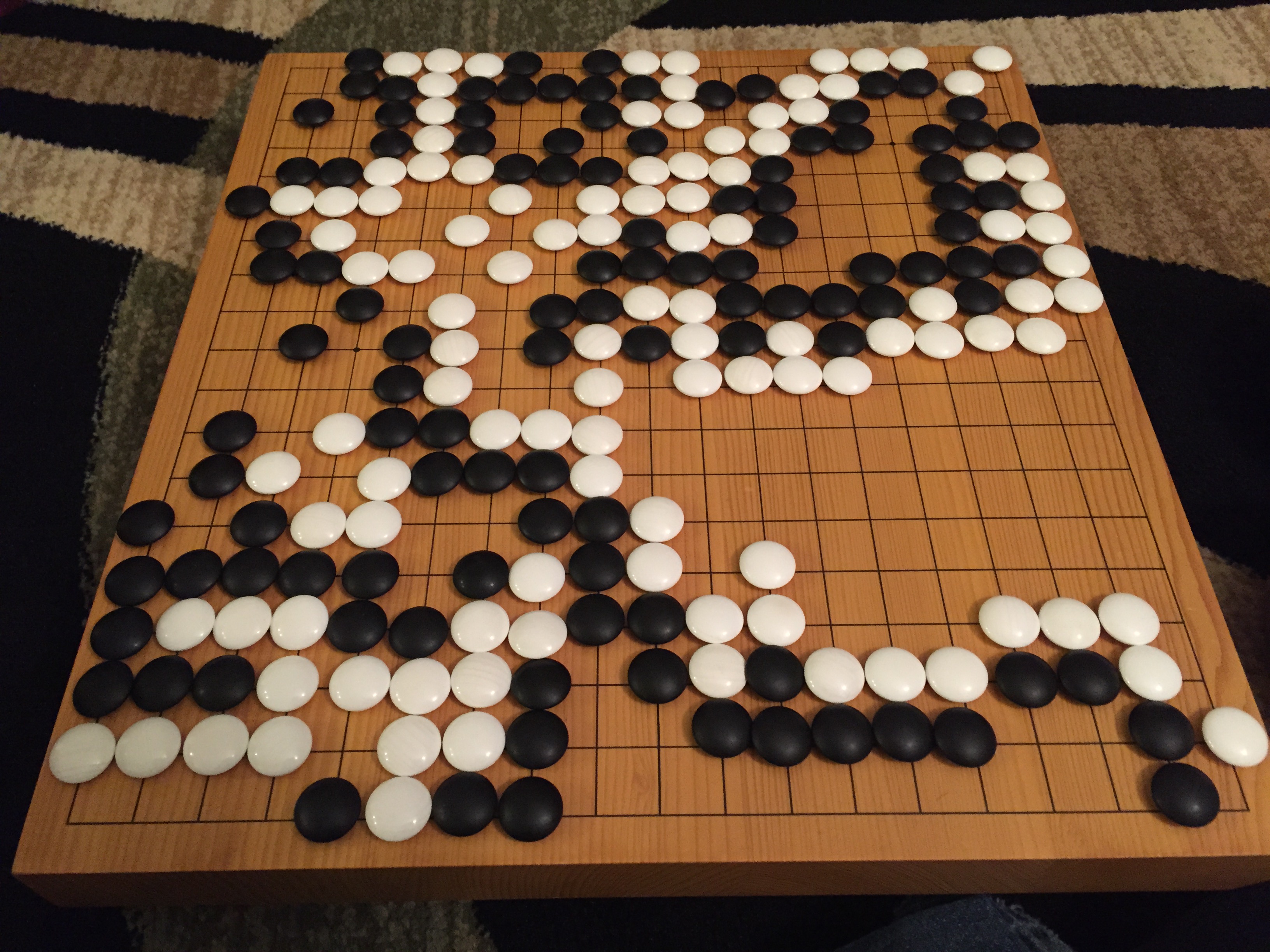 Stirring the Embers Once Again...

As many of you are aware, the legendary Go Seigen passed away on November 30th. I’ve been wracking my brain for a way to properly honor him, but it is still eluding me. To help the process out, I dec

One Point LessonNever let your guard down against a professional. NEVER!!!

In that game, (12) is a weaker move than I would’ve expected from a player of that grade. Otherwise, though, Black’s play was good. I also think (38) was too loose and that (54) should’ve been on the left of White’s group. 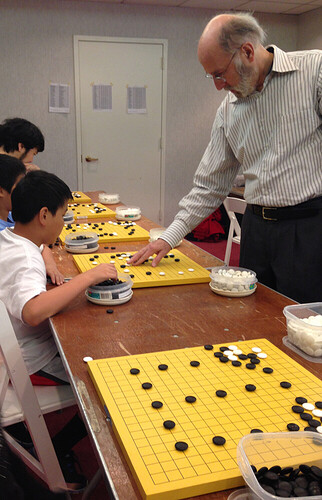 This board appears to show a nineteen-stone placement.

From BenZenGo’s report on the 1st Washington Open Baduk Championship.

I personally like early and aggressive reduction that borders on shallow invasion, but I can at least play out a moyo style game to some degree. I may not like it, but if I really wanted to win, and invading is too much of a risk for some reason, or if I somehow Get a moyo over the course of the game, I can switch gears and adapt. The key point is: I know, to some degree, how to use whatever comes up.

I learned all this by watching/playing mid-to-high handicap games. Playing lots of stronger players on even games has its own educational virtue, but taking and giving large handicap is extremely beneficial for combat. I probably can’t emphasize this enough here. Need to learn to invade and reduce? Need to learn to play lightly and fight like a cornered badger? Give out 5H! Or even 9H!

Can’t fight for your life? Keep losing your moyos to invasions? Take a bunch of handi from someone stronger than you, and FIGHT them! And don’t just calmly take territory, 4th line stones are for pounding your opponent with. You’re out to learn, not to win! Rawr!

I’m a fairly aggressive player, especially with handicap stones in my favor, so I teach one thing about handicap games that I believe applies to moyos in the general sense.

Handicap stones are for power, they’re for the systematic attacking, squeezing, and if necessary, killing of the invader, all in the name of profit. This is why I lumped using moyos and basic combat into one heading. They’re very much related.

If you can read Japanese (and dated Japanese at that) you can try reading Hattori Inshuku’s 1824 book Okigo Jizai 置碁自在.

It consists of ten volumes, each containing handicap game openings of a certain number of stones.

Macfadyen shares a thirteen-stone handicap game he played against a 4k, as a comparative tool of assessing a challenge which was being offered at the time to produce a Go program strong enough to beat the British Champion (then, as in very large parts of the Championship’s history, Macfadyen) on thirteen stones.

The question occurs to me whether 4k has grown stronger in the nearly forty years that have passed, or whether Macfadyen was simply peculiarly strong (and of course he was), and whether or not this implies that EGF 6ds can attempt to give thirteen stones to 4ks today.

Macfadyen, as one-time European Champion, might have been one rank underrated (or not) but he was certainly no professional. I favour the first explanation: because of the lack of a unified national (much less continental) rating system, Black may have been an unusually weak 4k, having perhaps been promoted overly quickly within his club.

However, I think it’s also very reasonable to suppose that the gap between 4k and 6d has shrunk greatly in the wake of the massive increase in both free and commercial resources since that time, on platforms like youtube which wouldn’t even be invented for decades to come.

It’s also worth noting that Go AI development didn’t proceed as quickly as expected. Even twenty years later, I think it would be fair to say that there was still no bot as adept as the human 4k playing Black.

I don’t know what happened to the thirteen stone challenge. It probably just faded away. 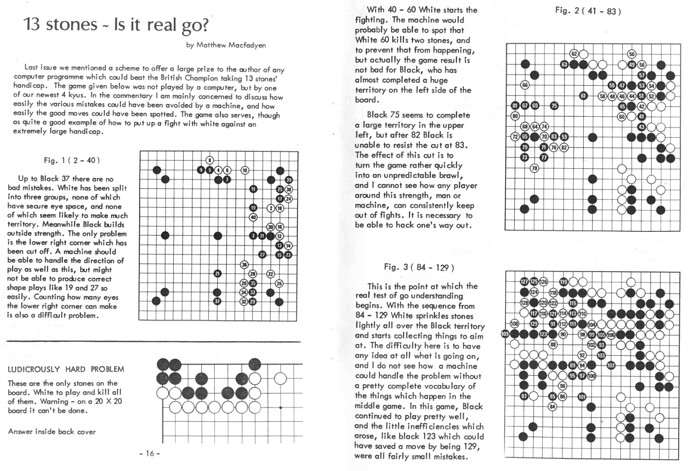 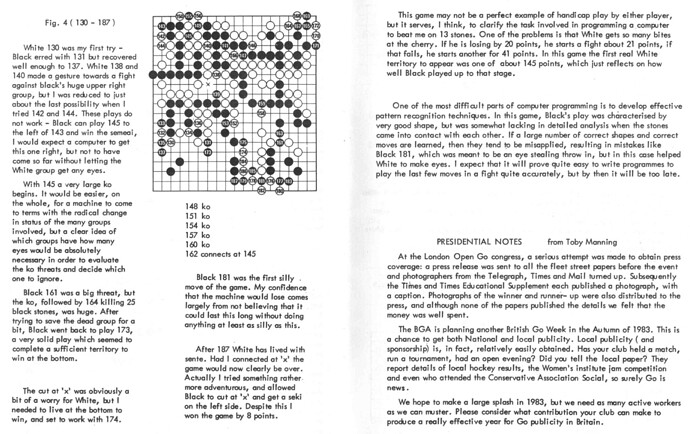 I converted the game and comments into a demo board.