Anyone wants to try handicap 9x9 to see if OGS auto handicap settings work for 9x9 at all?

Auto handicap 9x9 Join at your own risk. Handicap on 9x9 is known to be silly. The idea of the tournament is to see just how silly it is. How many games will black win? How many will white win? Salt Cat: The Ghost of South America...

I think black has too much advantage there.

This thing is silly enough for me. I’m in.

How is automatic handicap on 9x9 calculated on OGS? How many ranks per stone?

How many people will resign immediately after realizing what they got into? We already know that a lot of people don’t read.

Although the first round might be fairly normal if we have a lot of players and within each group the ranks will be close so almost no handicap.

Spicydragon’s going to have a rough time…

Their rating really started diving down fast. Is that just from the odd loss against weaker players? Presumably in some cases with high handicap?

I believe it’s because handicap games are not counted proportionally in the current iteration of the ranking system. Although I’ve never had this confirmed, and have no real evidence either.

24 subscribers so far.
Will this become next monster tournament?

@S_Alexander, the tournament has just started and because its a McMahon style event, all the games in my group are even… Also because my rank is very low there is no chance I can ‘win’ it as I start at -13 points.

If handicap tournaments are going to be meaningful, they cant be McMahon as this system doesn’t allow games between significantly stronger and weaker opponents.

I suggest double elimination like the one I organised: https://online-go.com/tournament/64786.

Mr Director @S_Alexander, how is that here we have starting points down to -15 while “through the years” had just -4 ?

@DashaTabasco simultaneous McMahon was the only solution because we need a lot of games to judge the fairness of 9x9 handicap. Yes, the first round is either even or one handicap (komi +3.5) because 9x9 uses reduced handicap but the second and third rounds should have more variety as players move up and down the groups.

@Lys Through the years has 12 rounds over long stretches of time. We can have no starting points at all and because players will have to play maybe 100+ games the strongest players will rise up. And it’s not very meaningful to assign points based on your rank at one point of time anyway since we plan to spend decades. So only a symbolic advantage for stronger players. In 3 round tournaments we have fewer games to determine the winner so harder starting point discrimination makes sense. I thought if I make it low we’ll get into situations where in the second round strong bottom group player will be matched with weak top group player, and I thought that’s too much. But maybe I’m wrong. In this one tournament we can always have a second chance to get it right though unlike some others.

Honestly, I have no idea what’s the right bars for Simul McMahon. I’m open to suggestions.

I didn’t expect to win all of my games. Actually I was expecting to lose them all, since I didn’t play 9x9 for years.
But now I have 6 points (well, one is still in scoring) ((that’s 1 more than I deserved, right?)) and I’m leading the ranking so far.
Totally unexpected. (it won’t last, though)

Anyway, I can’t imagine my next round: playing against dans? With how many stones?

I guess, you’re in a good position now to win the tournament.

You started with -2 points.

Really? I don’t have evidence for that . I just thought that all players in my group started at -3.

It would be useful to have this piece of information straight out the server, instead of doing differences between score and games.

Really really. Would I lie to you 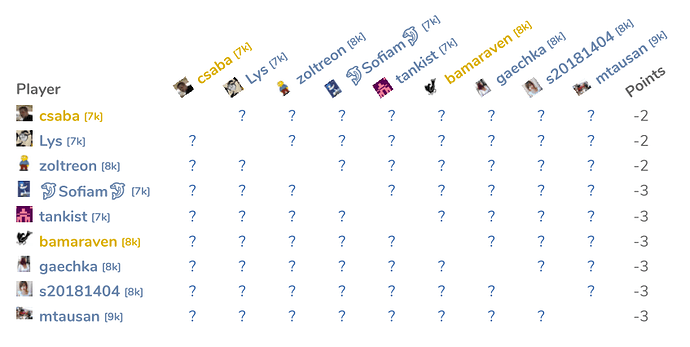 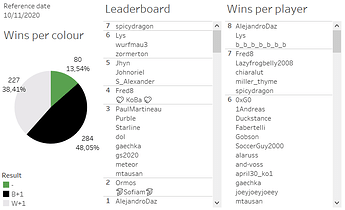 No resigned.
26 disqualified.
!0% games in progress.
94 players completed all of their games.
Only 1 didn’t complete any of his games. 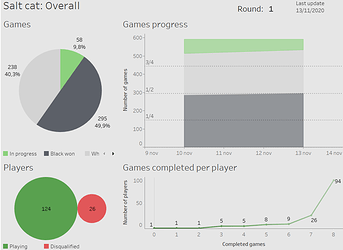 Second round will likely see 3d or more facing 6k or less, for the happyness of those who wanted to test OGS handicap system! 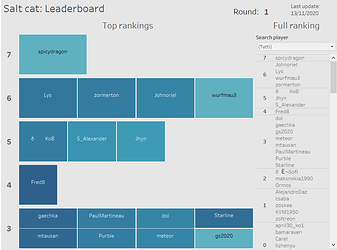 Rank mixing isn’t as great as it should be maybe. It’ll be better in the 3rd round but not quite dan vs tpk probably. Maybe next time we’ll start with 0 points for everyone. But how many rounds?