I don’t play often handicap games but when I do…

…I just don’t know what to do!

When I am black it’s quite easy: don’t play puppy go, use handi stones and reinforce, play for territory and don’t get mad about invasions.
Sometimes I can manage it to work.

But when I’m white I feel overwhelmed since the start an I can’t figure an efficient way of dealing with handicap stones.
I must assume that my opponent is weaker, so probably I should try and trick him and let him play wrong moves but I’m not used to do it, so I don’t know what to do.
Also I don’t like to trick people.
But if I only play solid moves I can’t compete.

So, what’s your advice when playing white?
What’s a good strategy?

I just play normally, but somewhat greedier than usual because the idea of handicap is that I should be able to get away with being greedier due to the strength difference, and thus reduce my disadvantage. Unless it’s like 8-9 stones. Then you have to try and kill stuff.

If you play ‘normal’, and B wins, good for B! Time to reduce one handicap stone. Takemiya sensei is known to play ‘normal’ and is happy when his student wins.

That makes sense in a teacher/student relationship or with recurring friendly games but in a handicap tournament you should be doing what you can to win. As White you might need to take measured risks as you would in any game where you are behind.

Don’t overplay, wait for their mistakes. Build the sides since corners are already partly theirs. Approach and tenuki is a good tactic in fuseki.

As white, I’ll try not to overplay but still play the sharpest sequences: if normally I would be 50/50 between a peaceful and a risky / light move, I’d go for the risky move (like if I was a bit behind in normal play). By doing this I am learning myself.

I will not play moves that I know are overplay until the point when I feel I should be resigning and normal style cannot possibly win me the game.

I am talking about ranked handicap go, not teaching games. These are another matter.

I think you mentioned it in the title (Mindset)
It’s all in the mind
You can play anyway you want
If you don’t like overplay, then don’t play them
If you do play them, treat them as probes as a test to see how opponent reacts
You make consider some moves to be overplay, but a stronger player might consider them “probes”.
Every move you make, your opponent will react, if your opponent doesn’t make the proper move, he/she will make more and more mistakes, all you have to do is make sure you react properly to his/her mistakes.

The reason you’re giving handicap stones to begin with is because you’re stronger than your opponent whether it be reading, fighting, opening and etc.
So fight your opponents with your strengths not with your weaknesses, take them into your stronghold and conquer their mind+body.

Many people often go into the mindset believing their rank equals their true strength
If you start believing you’re way stronger than you actually are, and start playing even games with stronger opponents, you’ll be stronger in no time

Anyways, back to the handicap stuff
Before you begin the game, start visualizing that

And last but not least, have fun.
Enjoy the game!

Don’t overplay, wait for their mistakes.
…
Approach and tenuki

These are particularly resonating with me. I think I had a hint of it in my own games but seeing it clearly stated was enlightening.

This isn’t my mindset for sure!

If you start believing you’re way stronger than you actually are, and start playing even games with stronger opponents, you’ll be stronger in no time

Well, I disabled ranking display in my profile and quickly gained some kyu, so I suppose you’re right in some way.
Knowing in advance that my opponent was stronger probably was pulling my brakes. Now I just don’t know and do my best.

Don’t overplay, wait for their mistakes. … Approach and tenuki is a good tactic in fuseki.

Exactly this and I would like to add a few things.

Consider tenuki as your main weapon. Your opponent is bound to play redundant and slow moves. Take advantage of that by taking sente as soon as possible to play elsewhere. Avoid playing aji-keshi moves that fix the position. Try to keep the position fluid.

Stay calm. Don’t play overaggressive/big overplays, because that gets you into trouble. After all, as white you are faced with many positions that are dominated by black stones. So you need to make flexible groups and you need to be prepared to sacrifice some of your stones. Try to overcome the handicap little by little and make the game somewhat close by the time that the endgame starts.

Links to some handicap games of mine where I feel that I played quite calmly. 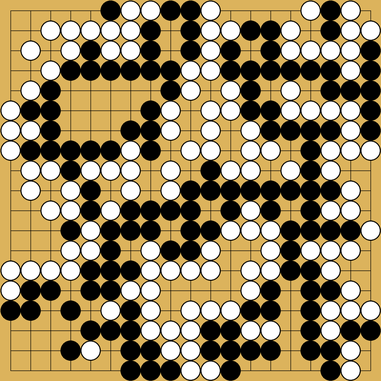 Opponent in 2nd game is about 15k in real life, handicap 17 stones:

Opponent in 3rd game is about 10k in real life, handicap 9 stones. In this game I got an earlier lead (somewhere around move 92): 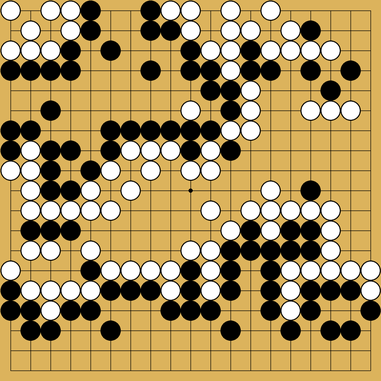 I haven’t seen it mentioned, you cannot play territorially - you have to take aim for an influential game. Your opponent already has an influence oriented position - so assisting them in continuing to establish their influence is the worst idea.

white should not play normal joseki. sprinkle your stones around the board. tenuki a lot, be patient. avoid heavy groups, you must play lightly. avoid the decision of whether to slide into the corner vs invade at the 3-3 point for as long as possible.

I’ve been playing and kibitzing more handicap games lately, and I’ve come to the conclusion that in a “high handicap” game (6+ stones) there are three playable styles available to White.

Optimistic approach for White to high handicap:
“Look at all those yummy stones to kill”

Also one tip is to not play too many sente moves, where the reply is obvious and good, because that’s one fewer move out of 150 for them to mess up and do something stupid. Sente moves tell them where the correct area of the board to play is. If you play a good gote move and give them the choice where to play, they are quite likely to play some really bad slow move somewhere and give you back sente to do something good, particularly against DDKs. Of course bullying moves which look like sente but aren’t really, but you can persuade your meek opponent to answer are part of White’s arsenal in a high handicap. How soon and often you can do these kind of moves takes some judgement of your opponent’s style and mental state.

RandomChromics vs. Uberdude is a 9 stone handicap game which shows some examples of how to approach them:

I think the fact that Black decided that there was no longer anything worth playing in the top right quarter of the board, and that (18) was the best thing that could be done, rather reflects his own mindset.

Also that Black doesn’t try to really attack R6, eg. with (20) R5… his play seems to have some unnecessary timidity.

18 at O10 is good. If I was playing honte I would have jumped around there or a space further for move 19, but felt it was too slow for a 9 stone handicap as it would allow black to simply play r6 to connect his q4 and q10 stones together. In high handicap games White is trying to prevent black getting large scale connectivity, because by splitting black white can later turn the tables and attack and bully black into a submissive style of defending groups or even killing himself (it’s very hard for white to actually kill groups in high handicap, it’s more about giving black the opportunity to kill himself).

20 at r5 is risky as you help White kill Q10. The big mistake in that corner was the tenuki of 28 and then inefficient 30 which still let me connect under due to liberty shortage. In fact O10 would again be good, ignore the approach and attack White’s right side group. Black should be attacking in high handicap.

It’s an useless skill, no need to worry about.

Each chapter lists the guidelines which form the section headings. For example the first three sections of 24 in chapter one are “Black must attack”, “The star-points are defective in securing territory”, and “Black must play for influence”.