I put a pretty go board at my father's place and

I put a pretty go board at my father’s place and my father likes it as a decoration, it even replaced the chess board above the living room small table, altough sometimes the chess board is right above the go board… I have played a few times with my father but he is not interested in the game and we may not play anymore. One of my brothers asked me to play the last time so I teached him the rules and some other stuff very quickly and we played two games. The first game was in 13x13 board, no handicap, but I said if you kill 1 stone you win and we bet a bit of money. It was not easy I mean he had chances but he missed them, in one case I risked a big chunk of territory to avoid he kills a stone. During the game I gave him the hint look if you play this or this I can’t answer like this since it would be a ko and you may win and explained again how a ko works etc. Anyway I won in territory and without losing any stone.
The second game was in a 19x19, with a handicap of 12 stones haha and I took a picture, he was in a hurry so he resigned here but I hope he didn’t get traumatized and expect we play again soon… 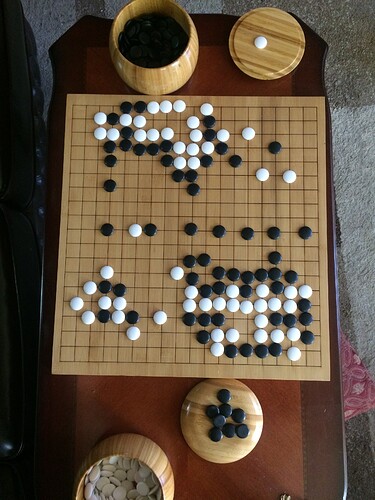 Feel free to archive the picture in Show your Goban/Study Space! if you want c:

if you kill 1 stone you win

That seems like a great and challenging way to play against new players! I will try that next time I’m playing buddies. Somehow seems less patronizing than handicap but idk.