That’s only true if the relationship is voluntary on the part of both parties.

“Automatically” flinging beginners with experienced people who have no interest or talent for teaching, no patience with beginners, is a recipe for disaster.

(specifically, those who are welcoming and similar in strength)

in parentheses, but this is critical for your proposal. What you haven’t outlined is how this would be achieved in practice. Right now it’s achieved by interested beginners asking for a teacher and instantly getting half a dozen in the forum.

However, I think most importantly, this concept of “pairing up with a nice welcoming person” is completely separate from the issue of “what the starting rank should be and how that is managed”. Which is the topic of this thread. Because it’s such an important topic (IMO) it would be better not to derail it with side issues - they could have their own thread.

Closing this thread temporarily in order not to waste your precious collective energies by letting you run in circles—this is an old and long thread, and people tend to jump in w/o reading the whole thread, thus running danger to reinvent the wheel, so to speak.

I would really like to see any of the here proposed changes applied.

Ask new player about their experience and then overwrite matchmaking for the first few games.

Just the latest in the ongoing flow of beginners finding it hard to be 13k… bring on the humble rank!

Can i play somewhere and get a win now and then? Beginners

Hello, I come from the world of chess (15 years) and find Go interesting. But it seems to be so extremely difficult that really chess seems like a piece of cake compared to Go. When i started learning chess i was mostly losing but occasionally did some wins. Of course i don’t mind losing especially when i learn a new game but this thing becomes really annoying with Go. Is there some software where i can choose the difficulty to 0 in order to start playing and learning? Although in the past i was…

We talk in circles, don’t we. Here’s a fresh idea. Look at how many people join OGS vs how many people continue to play.
Since I have player database downloaded, I can separate them by registration month and see how many (rated) games they have. 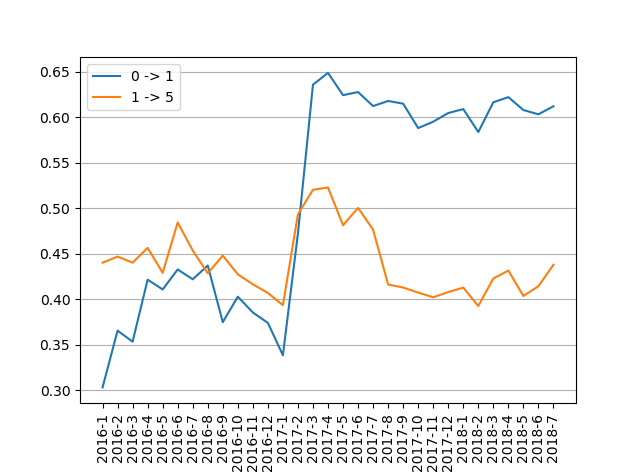 I don’t think we talk in cicles in general. This thread in specific was locked for a while because we reached an actual conclusion: that humble rank would be a Good Thing. No more circling was needed, and we aren’t circling back for a re-discussion now.

All we’re waiting for now is for the devs to investigate it in detail, as per

“My hunch is resolving this will have very little UI work to do, I need to sit down with the match data for the past year and run some numbers.”

I’ve not followed the whole discussion but maybe we should revive an older idea (can’t remember whose it was), namely to show new members a few puzzles, like these: 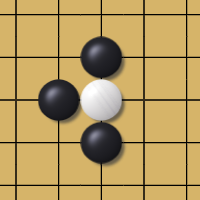 If these two are solved correctly, then they might be ~28k at least? 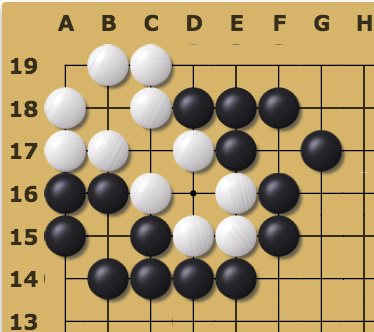 If this one is solved correctly, then they might be 25k?

Maybe 23k if both solved correctly?

Of course the titles I’ve given here should be omitted in the “Test”.

I am too weak to judge for which strength specific Tsumego should be solvable but I’d imagine that Dan players could gauge a few Tsumego quite precisely so that we could give new members a few Tsumego to judge their strength down to 15k, maybe even 13 k.

Just a few raw thoughts in a free minute.

(BTW I’ve re-invited @anoek to the discussion, hopefully he can find some time to participate)

Personally, I don’t see a need to revive other ideas - the humble rank idea seems by far the most suitable, because it plays on the strengths of the Glicko system.

Personally, I don’t see a need to revive other ideas - the humble rank idea seems by far the most suitable, because it plays on the strengths of the Glicko system.

Yesterday, I joined KGS and they have a perfect solution. Ask new users for their rank. Then use this rank in automatch until their rating has stabilised.

If they already play Go then they can use an existing rank, otherwise they can select “Beginner” which would be 25kyu on OGS.

OMG here we go around again.

Did you read the thread?

That’s why humble rank is the answer.

No. In Glicko players have to start with median rating. Rank is an overlay we use for matchmaking and Glicko don’t care about matchmaking. You can match anyone against anyone else without disturbing Glicko.

Did you read the thread?

That’s why humble rank is the answer.

I read the thread and also contributed.

I was not suggesting that the user provided rank would affect the Glicko rating in any way. The initial rating would still be 1500. Only the automatch would use the provisional rank. As I understand it, this is the way that KGS uses provisional ranks.

I don’t believe that a “humble rank” is the answer.

Yesterday, I joined KGS and they have a perfect solution. Ask new users for their rank. Then use this rank in automatch until their rating has stabilised.

This is also how OGS used to do it.
This caused a little bit of a sandbagging problem when so many experienced players created a 30k account for “climbing in their place”, and there were also huge amount of beginners who didn’t know go’s ranking system (they werent sure should they pick 30k or 6d, and they usually guessed wrong)

I think there was a darn good reason to change things…

Didn’t you write that Glicko simulation to explain the jittery rating graph?

Could you maybe see what happens to the pool for each option (status quo vs new players choosing their rank)? The table of conditions would be something like (actual_level x reported_level)

I suppose sandbagging would be a little more common (if not as extreme as dan>ddk) than airbagging and more pernicious because if someone picks a rank that’s just too high, they’ll inevitably lose.

This would be my guess in terms of how frequent under/overreporting would be based on actual rank:

Edit: Actually, considering there are more sdk than dan players…

Here’s my take: We can’t ask new users questions and quizzes about things, it’s not beginner friendly. It’s great for folks who already know how to play the game, but one of our primary goals has been to grow the community, and asking brand new players questions about things they don’t know about yet is not a very welcoming thing to do. Also allowing people to set their own rank causes a bunch of problems (as mentioned in a previous post, we used to do this, it caused a lot of problems with sandbaggers and heliumbaggers), so that somewhat precludes doing things like making an optional button they can click to take a quiz or something.

The humble rank idea I don’t think will really solve anything as all it does in effect is shift the matchmaking problem down, and will probably have unintended bias consequences on the rating system.

Increasing the starting deviation (ie decreasing starting confidence) does not help (I ran a bunch of simulations with this back when picking values, turns out that Professor Glicko fellow knew a thing or two and picked some great default values).

Basically, there’s no perfect solution, but so far I think this is the least bad. I do think there might be some tweaks possible with matchmaking to help bias against matching high confidence 13k’ers with low confidence 13k beginners - however I’m not sure this will be the panacea that one would hope for either since we need to balance matchmaking time with quality of the match being made, and we only have so many 13k’ers looking for games at the same time.

I don’t want to summon ghosts of the past, but this was more of an urban legend towards which we never got solid numbers to substantiate. Personally it hurts me that my favourite option is discarded based on dubious reasons

Glicko thanks to it’s variance awareness (unlike ELO) is actually much better at accounting for the starting rank. I can kind of guess why it would be pain to implement - today players are seeded in completely uniform manner, so it would require some fiddling with the system. ‘Before we start’ question doesn’t have to be scientific, 3 options (just started, casual, seasoned) should be sufficient. All in all this seems to be the least disruptive approach.

And now… let’s wait for the ghosts

Basically, there’s no perfect solution, but so far I think this is the least bad. I do think there might be some tweaks possible with matchmaking to help bias against matching high confidence 13k’ers with low confidence 13k beginners

You have done a good job with the Glicko implementation. Thank you.

I think that a couple of tweaks to the user interface would solve the problem:

The spike coincides with the AlphaGo Master games, but it is interesting that there is no great disruption coinciding with the Glicko implementation. Also, I think the increased gap between the blue and orange lines reflects the influx of more people driven by curiosity (due to AG), who found they weren’t really interested in the game.