I understand why Leela wouldn't see this >25 moves ahead, but why not when it's two moves away?

Leela’s analysis thinks White is winning this ladder, and I know this is a problem because it can’t see so far into the future (25 moves IIRC)… but why does it still predict ~70% win for white when the ladder breaker is so close? Can’t it see this when it’s just 2 moves away? Can someone explain? 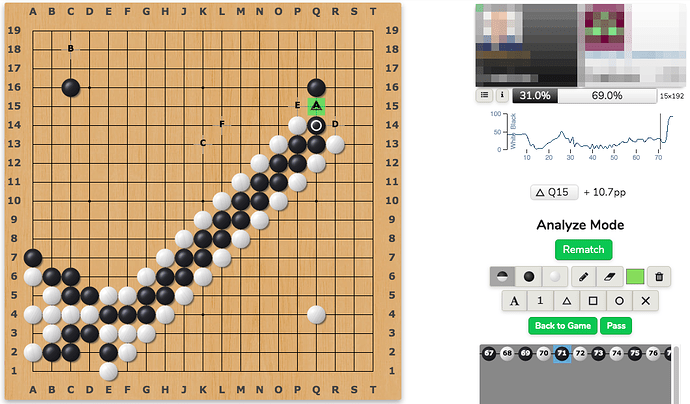 Leela can normally read 25 move ladders. It just takes a while. Positions involving long ladders can be a real drag on Leela’s performance, in my anecdotal opinion

The AI review is currently broken. You remember the other thread, where you replied directly to my comment about the issue? We’re still waiting for @anoek to get on the case

Meanwhile, based on a Leela console output screenshot in a PM thread, and my reading of Leela source code, I have begun to suspect that the percentage values that you see on the moves are in fact the direct output of Leela’s neural network. In other words, her “first intuition” on the position. They are often plausible, but essentially worthless.

We’re still waiting for @anoek to get on the case

OMG, that makes so much more sense. Thanks.

Your review was limited to 200 playouts. This is generally strong enough except that ladders are the Achilles heel of LeelaZero and other neural network AI, even AlphaGo. It takes more playouts to understand ladder situations rightly.

Yes, I know that, however when it gets near the END of the ladder breaker, it should “see” this from 200 playouts. Am I right?

I mean if I gave it the position above, even with 200 playouts, this is only two moves away from disaster and the output is still thinking these are good moves for white.

Yes, LeelaZero on my local system looks much different and gets it right after just a few playouts. anoek has been alerted to a possible bug in implementation and has been looking into it.

anoek has been alerted to a possible bug in implementation and has been looking into it.

He’s almost done. He … just said so about three comments up. ;-/

Hehe, so it redid the review of the old game and it STILL doesn’t see the ladder at the start, but it does see it MUCH sooner. I’m only a DDK, so I’m not expecting the world and I love having something review each game so I can improve a little each time… this is fine. I just couldn’t understand why in the old way it was not seeing it until AFTER the collision.