I would debate about a move :) 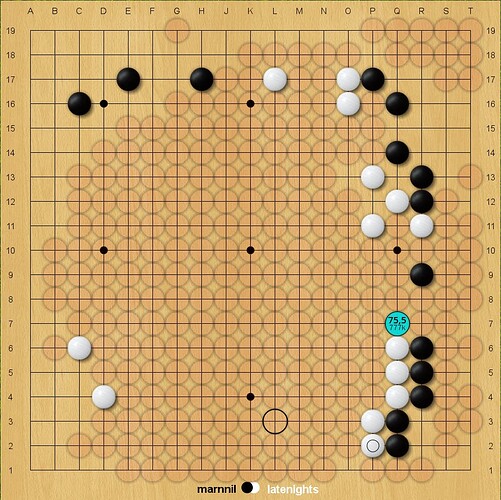 It’s black’s turn.
That move is big, it’s purpose is to avoid being sealed along the edge and thus white building a big wall or moyo in the middle.
Also hane at the head of three is a strong move.

Therefore it’s a big move for white too: pressing down black and building center.

Someone else might be able to explain it much better but I think it’s a weak point in Whites shape, a hane there reduces Whites three stones to three liberties allowing for some potential tactics later. One could also think to double hane if white blocks with a hane.

But I guess the idea of creating weakness in shape means an invading move on the bottom side might have better chances to live or escape later with some forcing moves.

In other board positions it might be good for territory for black to get off the third line to make points, but not so much here.

if I play anywhere else I have 50% winrate

I think program that you are using only good at finding the best move, but useless at getting info about 2nd best, 3rd best, …

Besides having a significant effect on white’s center potential, Q7 offers good follow-ups for the player that takes it.

the program I use is alphago, I guess it’s the best for all ^^

Thank you all for trying to help me understand the position

Even if it’s not quite clear yet, I understand a little better

If you play your move on the lower side and white plays q7 then what is your plan?

the program I use is alphago

You have access to the AlphaGo engine? Is this publicly available somewhere? Or are you part of the research team giving you private access?

To be honest, I don’t realy understand it either. It is a little strange that AI says missing that hane is such a big mistake. I can see how White can somewhat press Black down and how Black has a nice double hane continuation but I don’t feel it is enough to explain that big a swing. Perhaps it is that White’s P11 stones are weak and Q7 hane is the start of a seperation process.

Either way, to understand the local shape better, here are some resources:

Hane at the Head of Two Stones at Sensei's Library

Sensei's Library, page: Hane at the Head of Two Stones, keywords: Shape, Tactics, Proverb. SL is a large WikiWikiWeb about the game of Go (Baduk, Weiqi). It's a collaboration and community site. Everyone can add comments or edit pages.

Hane at the head of three stones at Sensei's Library

Sensei's Library, page: Hane at the head of three stones, keywords: Shape, Proverb. SL is a large WikiWikiWeb about the game of Go (Baduk, Weiqi). It's a collaboration and community site. Everyone can add comments or edit pages. 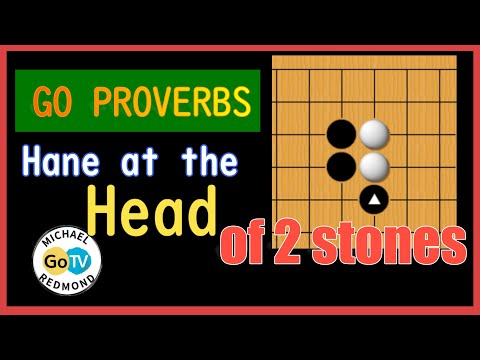 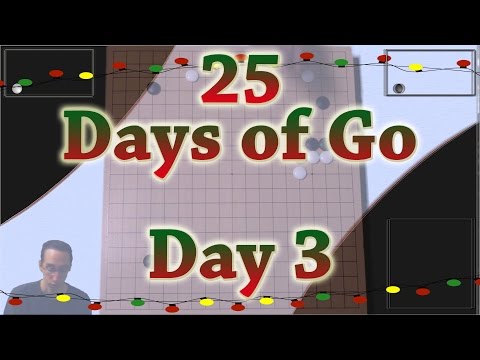 To be honest, I don’t realy understand it either. It is a little strange that AI says missing that hane is such a big mistake.

Because no one has given the correct answer yet. Its not a beginner level question.

It makes a lot of difference if White or Black gets to play Q7.

Not sure I understand it either, but here’s a few example AI continuations, in case it helps anyone get a sense of the followups and evaluate the position better. Not following the “blue move” every time, but still picking moves that are pretty similar in overall winrate. In my eyes, white ends up shorter on cash than black playing the “correct” way but noticeable whole-board thickness, while the other way white gets more bottom-side profit but ends up thin on the top. The judgment of these results is definitely a high-level question. The cut around O15 contributing to white’s thinness seems to be pretty important to evaluate.

Note that white’s correct followup is NOT where black’s followup is if black tenukis as given. White needs to play the hane, not extend.
Furthermore, if black does hane instead of tenuki, black does NOT double hane. Black calmly extends and happily takes gote.

Example continuation 1 for black’s tenuki:
(white has no cash but the right side is super-thick since white filling liberties on black’s 4 stones to complete the wall is locally sente) 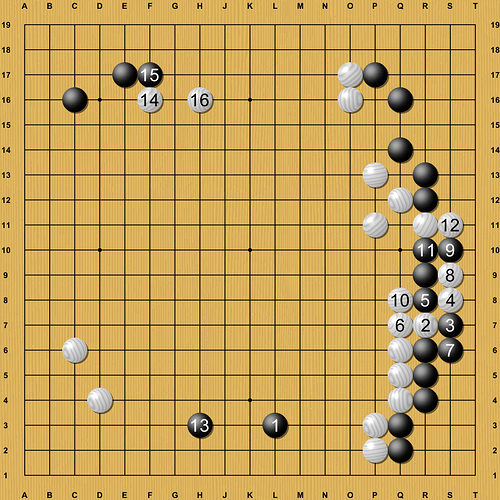 Example continuation 2 for black’s tenuki (white again has little cash but gets the initiative on the bottom and has okay-stable groups): 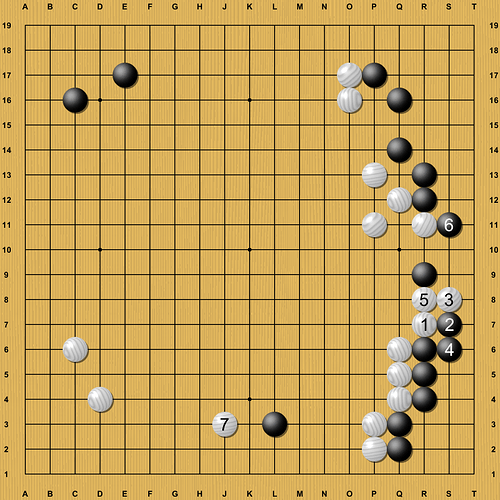 Example continuation 1 for black’s hane (white gets a lot of bottom profit while black attacks the middle and top): 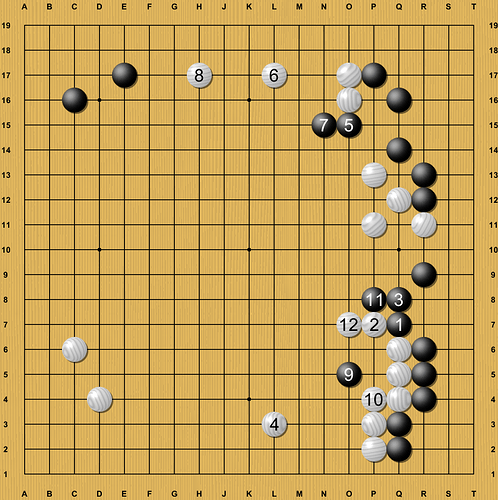 Example continuation 2 for black’s hane (black plays somewhere on the bottom next): 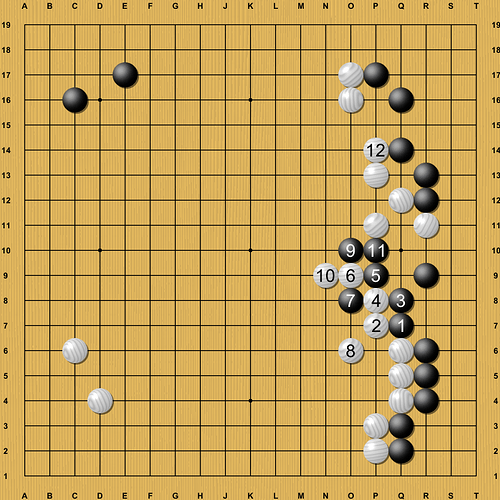 I was going to use the socratic method (asking questions to lead self discovery of answer) but for sneak peek.

if I play anywhere else I have 50% winrate

Since we’re talking about AI opinions, I wanted to check with OGS’s katago. 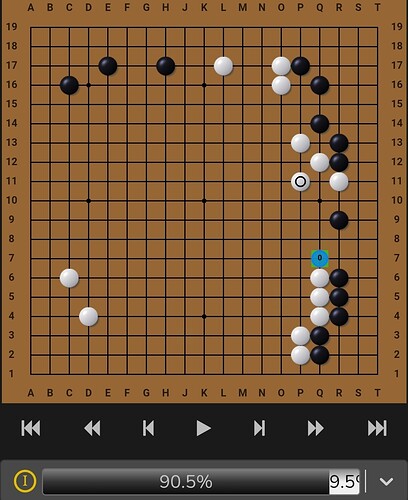 But when we switch to score instead of winrate, we see that black’s ahead by just 6.8 points. 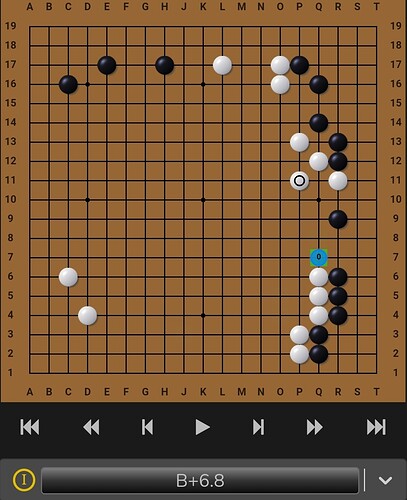 Against a strong AI, white just can’t recover.
At my level (about 4k on OGS) the game is still pretty even and open: everything’s still possible.
That’s why I look at score and ignore winrate. Winrate is just misleading for me (while it definitely can make sense for strongest players).

Playing somewhere else for black is a mistake worth about 7 points and that’s why the winrate gets back to 50%.
A 7 points mistake is pretty common in my games. 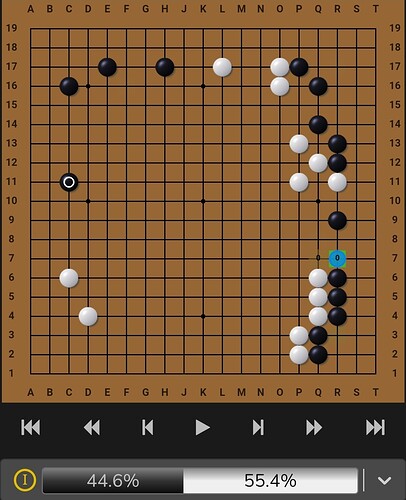 Though there are moves that are a little less wrong. Peeping at cutting point, for instance, isn’t that bad. Winrate drops at 68%. Black’s still ahead by a couple points. 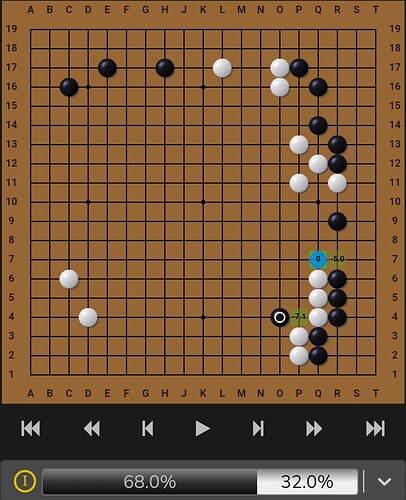 Eventually, that move looks that big because the game is still close and a handful of points can switch the lead from one player to the other.

Oopsy, it’s not alphago but leela zero.
I guess alpha go is better but the algorithm behind is the same so is a really strong program

@Atorrante I understand the move and if I do a tenuki he will play Q7 and I must reply so I lost the initiative. thanks

@hexahedron With the two last scene, white has a really good wall and can do something with no ?

@Lys Oh interesting point of view to switch winrate/score (but I not sure leela zero can do that, but thanks I will check

Correct, LeelaZero cannot do score difference. KataGo is highly recommended for all kyu players because of this key difference.

I ran a free KataGo review on the game for you, you can see it here: 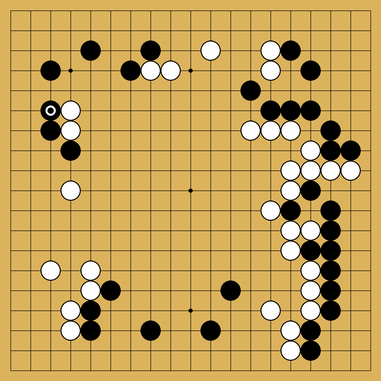 Make sure you toggle the AI to show “score” as I circled in the below picture (if you are not on mobile, it will be on the right hand side)