but there’s one feature that I really miss.
In Italy there’s a very famous weekly puzzle magazine called “La settimana enigmistica”.
It’s older than me and still going!

On every issue of that magazine there was a puzzle called “Il bersaglio” and it was one of my favorites. 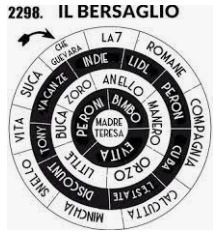 You had to find your path from the arrow to the center by jumping from a word to another by adding/removing/changing a letter or by analogy.
So you could jump from “ring” to “marriage” or “lord” or “chain”.
On a multi-language version we could include also translations.

I don’t want to steal attention from Pedantle and also I felt that it wasn’t really possible to discuss a new feature in that thread itself. So here I am with a new topic.
Is someone interested?
Should we start yet another forum game?

Anyway, I’m quite happy just by sharing this little piece of my history.

There’s a similar game in one of the English newspapers that allows connection by analogy or rhyme, iirc.

Perhaps we should take out the letter changing and add rhyme connections and / or links by synonym, to make this game even more different from Pedantle?

Or links by flipping the word, or taking the last letter and putting it on the front?

We could brainstorm all kinds of unpredictable connections.

Another idea would be to make diacritics a part of this game, and play around with those.

I forgot to mention anagrams!
Those were allowed too.
I’d love to see things such an Italian word changed in an English one by anagram.