Important forum topics not talked about by ogs as a whole

Firstly the forum doesn’t make decision for OGS but yes it’s a place of debates and even OGS team come and paticipate.
Then the forum is open to all so it is very democratic for players interested in it.
The more players will come and participate the more the forum can express some global opinion for sure.
So it is interesting to think how more could join.
There is a technical side as the forum is quite separated from the site (which was very recently debated) and there is a more human perspective searching how to make people more interested in coming here.

Final note is that some articles are oriented on what people want or not but that’s far to be the only use of it.

i agree, but i dunno, it just feels like if we are going to decide stuff, maybe we should divert some of the flow of players to it sometimes.
maybe i just want more people in chat and in the forums i dunno.

If people don’t want to make their opinions heard they aren’t worth to be heard. Most people don’t care about anything, they don’t know what they want, they’re like sheep. This is why they need someone to lead them and decide for them. Precisely why OGS follows the model of benevolent dictatorship.

you do know the impression this makes right

One idea would be to advertise (automatically) the recent topics on the main page.

But we can still try to help the dictator at least.

shouldnt be calling it a dictatorship

That’s really what it is like though. As much as anoek may value our input, decisions are not made democratically. All decisions regarding site policy and features are ultimately made by anoek alone.

We sometimes use polls as a tool to gather feedback and use site banners to alert players to those where more input would be helpful, but in the end those are only a source of information.

i mean he kinda is supreme leader, but we can just leave and or stop paying him

(for context, wikipedias definition of dictatorship)
A dictatorship is a form of government characterized by a single leader or group of leaders that hold government power promised to the people and little or no toleration for political pluralism or independent media. Wikipedia

OGS is a commercial undertaking and we are customers. It’s a bit much to bring ideas of democracy or dictatorship into this. There are no decisions made which are a matter of life and death (literally).

OGS seeks to maintain a usp of being friendly and listening to it’s community of users and has active forums that serve this purpose (among other things). If people want to express their views here they are welcome. Even in a democracy where life and death decisions are made by leaders, most people do not participate. I would be surprised if participation in the forums ever became a significant proportion of the active user base. On the other hand, i can image repeated pushing of the forums on the main site could be off putting for some.

Maybe a link to the forums could be added to say the chat page or sprinkled a bit more round the site but additional pop ups or messages about the forums is just going to be annoying. 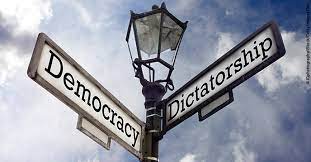 Can I ask what difference it makes to you? You’ve played two games on the site—neither within the last month. I don’t mean to be confrontational. I’d just expect this issue to come from someone who feels directly affected by it.

One point not yet mentioned is that we do raise site banners for consequential forum topics. That does draft some main-siters here from time to time, although I wouldn’t call the process democratic. But it’s not designed to be democratic, you know?

Can I ask what difference it makes to you

insert palpatine saying “i love democracy”
me like ogs, me hang out in chat room
i have actually played slightly more on another account. so thats like 4.
i have no good reason, but it doesnt matter.

Most people don’t care about anything, they don’t know what they want, they’re like sheep. This is why they need someone to lead them and decide for them. Precisely why OGS follows the model of benevolent dictatorship.

I totally agree with this cynical assessment, which contains a deeper truth than meets the eye. The Single Mind Principle works best in software development. It ensures that everything uniformly fits together. If you implement all the hare brained features that the hoi polloi scream about, you will have a shit show that can only end in a total rewrite where you throw away most of the crap.

Besides, important problems are fixed, such as the ranking problem.

the forums tend to be the place big decisions are made

Nope. In fact I don’t think any decisions, big or small, are made in the forums.

you do know the impression this makes right

No, what impression does it make?

No, a few of us make donations to encourage him to keep doing what he was already doing, and make it better.

Nope. In fact I don’t think any decisions, big or small, are made in the forums.

Correct. Forums and chat are a place where people who care enough can express their opinions.

Decisions are made by anoek.

(for context, wikipedias definition of dictatorship)
A dictatorship is a form of government characterized by a single leader or group of leaders that hold government power promised to the people and little or no toleration for political pluralism or independent media. Wikipedia

Yes, but you missed this: Benevolent dictatorship.

There is a general rule of thumb, that I have seen that it works through the years:

Polyphony/democracy in a project works if and only if:
a) People that make a proposal are the ones that are going to implement the feature they propose. This means that not only they usualy know what they are talking about, but they are also invested in their proposal. Friction usually occurs when someone ELSE comes up with a proposal that YOU will have to bust your ass in implementing.
b) There is no focal point in having a particular person that has done most of the work/investment, that might pull the plug if the project is eventually steered away from their initial goals.

In larger projects and most other cases what usually works best is a standard hierarchical model where wide proposals are being made from the clients or the bottom tier of the project members, then are shifted through the next level of management and eventually the high tier/owners of the project gets to decide if any of the few suggestions that made it through to their desk has merit or not.

Small projects that are run by a couple of people have only two choices:
a) If it is a commercial project that is supposed to generate income, then they have to create a platform that accepts feedback and from time to time take suggestions from their clients. OGS is mostly like that.
b) If it is a non-commercial project that is not supposed to generate income, then they are free to just make what they like and they would have enjoyed as consumers/customers. Art projects and hobby projects are usually like that.