It’s a bit similar to how a high school science teacher is not a scientist.

Perhaps, if they mostly derive their income from a platform like OnlyDans

I mean are there people that derive most of their income from Go streaming/YouTubing, and make a living wage while doing so?

What are some examples?

I don’t really know. I’m sure that teaching provides a large proportion of the income of almost any “professional” Go streamer, but then that also provides a lot of income to “traditional professionals”.

And if you’re streaming the teaching games or reviews, is the retail of the lesson a part of the streaming income or still something separate?

You need an M.S. or M.A. in my country to teach high school, which kinda does make you a scientist in a broad sense.

First I went with “Go professional (who also streams)”, but for these, you need a certificate or something, or go to tournaments. The quality of your Go should be controlled and confirmed by others professionals. Now I go with “Professional streamer of Go”.

are there people that derive most of their income from Go streaming/YouTubing, and make a living wage while doing so?

I don’t know for sure.
My belief is that people like Dwyrin could make a living wage out of youtubing and derived things such as:

which can collect money thanks to the visibility and acknowledgement due to YouTube channel.

I actually don’t know how to call those people.
I’d go with Go youtubers, hence I voted for Go streamers.

Go streaming/YouTubing, and make a living wage while doing so

Almost no category in those mediums makes all the money just from viewers/ adsense. Sponsorships and other streams of revenue (in this case, lessons for example) are also usually taken into account, even for the more prominent creators.

Also, fun fact, dwyrin started as a gamer Youtuber, iirc. So, professional Youtuber in any case, with a community change.

I’d like to know how this change took place.

He has an anniversary video about 10 years on YT or something like that, the road so far.

I checked his oldest video about Go: it’s a lecture on low Chinese fuseki done on KGS and then published on YouTube.
So it seems he was already good at Go before starting his channel.
Of course I can only see videos that are still published. Maybe he deleted some. Or his previous history as youtuber could be on another channel, I don’t know.

started as a gamer Youtuber

doesn’t mean he didn’t already know Go, only that his videos were “gamer Youtube community”.

It was my fantasy about a gamer that turned into go player. 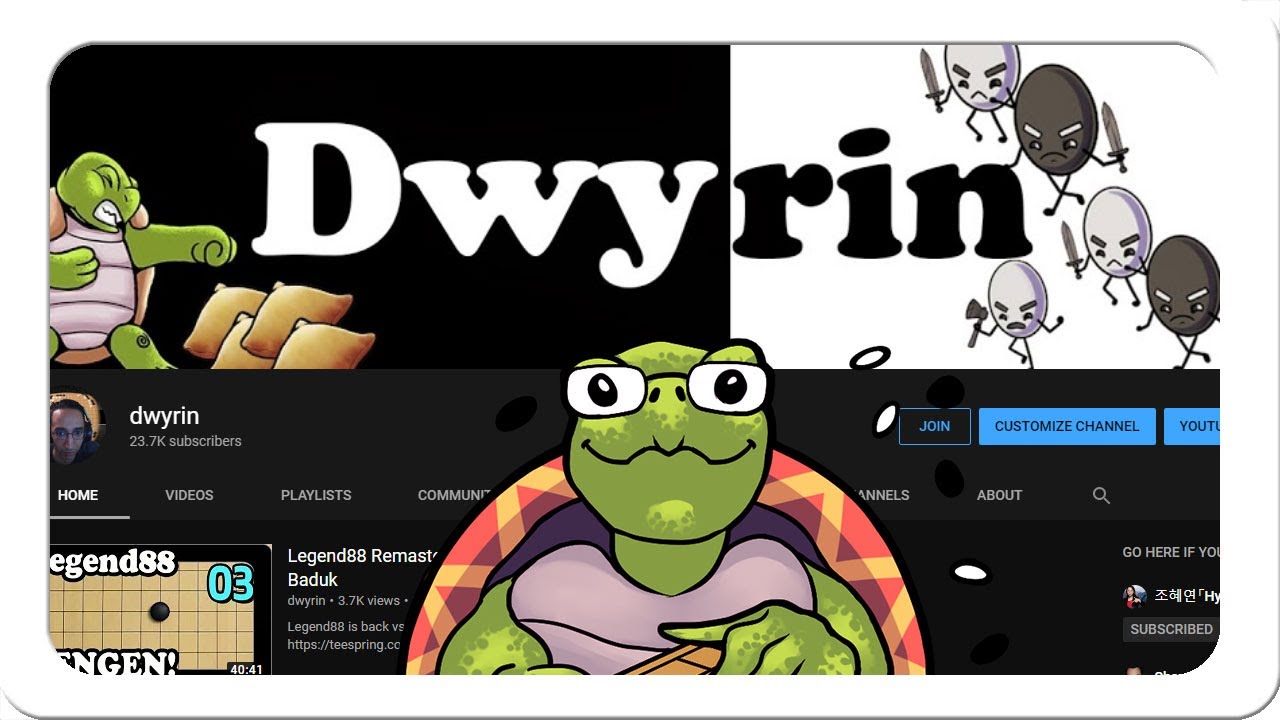 I can’t watch it immediately but I can’t wait!

Edit: @Gia you nailed it! That’s the video you were talking about and it says everything I wanted to know. Bam! Easy peasy! I’ll take it!

ie. do multiple keima have to be made by multiple knights? Is there one imaginary knight tracing out each individual knight’s move? Or is the knight’s move “a move such that would be made by a knight, that knight not being required to actually appear to make this one”?

This feels like a new high (low?) for Go-related pedantry.

And on this note:

I’d say knight’s moves unless I specifically mean two (or more) knights moving, and want to point to those moves.

Since I made this poll, I’ve been coming around to the (pseudo-)genitive plural, knights’ moves.

An identical choice exists in tiger’s mouths vs. tigers’ mouths.

What about “tiger mouths” and “knight moves”? Those sound reasonable to me too.