Is the OGS team aware of this?

In recent years statistician Jeff Sonas has participated in FIDE meetings of "ratings experts" and received access to the historical material from the federation archives. After thorough analysis he has come to some remarkable new conclusions which...

There has been a lot of discussion about the rating system on these forums, which can be found via the search feature.

Here is a post from last year regarding some updates:

I personally don’t know all of the details, but I believe the rating system on OGS has received very significant and careful consideration.

I’m not sure if the article that you post is entirely relevant, since OGS is actually using the Glicko2 rating system rather than Elo. Could you please clarify what you specifically meant to point out?

The “400-point rule”, says that any rating differences greater than 400 points will be treated as 400. This leads to inaccuracies in predicted win rates. The article says rating difference should be considered up to 800 points.

I don’t believe the OGS ratings system applies this particular rule. So, the entire point seems to be irrelevant.

These types of parameters are design choices that those who deploy such rating system might choose to set. What a group of chess players does with its Elo-based system is not necessary the same as what this Go server does.

Here is more information about the Glicko2 rating system: http://www.glicko.net/glicko/glicko2.pdf
Note that there are other key technical differences between how Glicko2 calculates rating in comparison to Elo and other Elo-like systems.

You might find more relevant discussion about specific implementation details for the OGS rating system on this forum via searches like this:

Thats actually pretty interesting, i think the 400-rule sounds very similar than being over 9 stones apart in ranks. Or without handicaps the percentages are prolly pretty close to 4-5 stone difference.

I’d like to add some comments about the rating system of the European Go Federation. This is different from the OGS ratings system.

The EGF rating system also doesn’t use a 400-rule or 800-rule.
The EGF’s winrate prediction is a customized form of normal Elo rating systems as used in chess.

Here you see the modified predicted winrated vs observed winrate from the FIDE data, that was discussed/proposed by the author of that article: 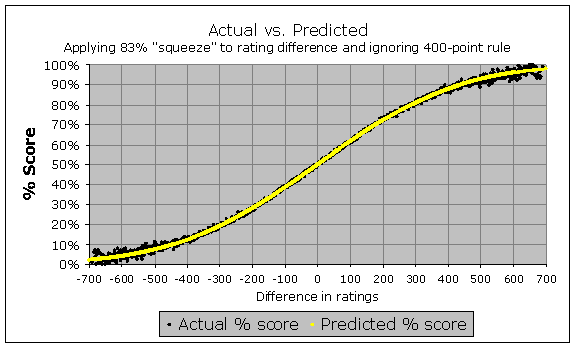 For comparison, the predicted winrates and observed winrates from the EGF data (these curves are horizontally mirrored and centered around the target rating to which the curve applies): 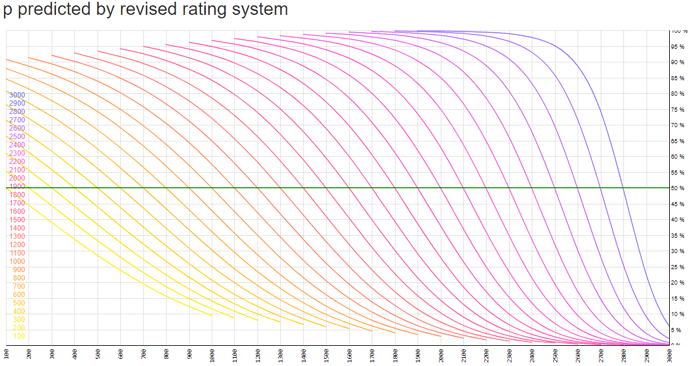 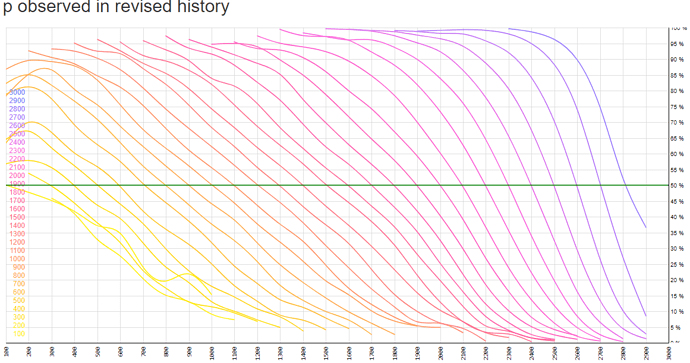 I’m not sure if the article that you post is entirely relevant, since OGS is actually using the Glicko2 rating system rather than Elo. Could you please clarify what you specifically meant to point out?

My first objection would have been

My humble opinion is at this point OGS team is aware of Elo’s dog’s second puppy’s name and also their neighbour’s laundry schedule.

Unfortunately, we’re not sure if they’re 2 kyu or 3 dan

Yes, but the standard 400 rule is still being referenced in the modern day despite being outdated. Here’s a website doing so. I left a comment letting them know about it.