Japanese rule; last move by black and stone in one's own territory

In Japanese rule, is it required that white plays the last move? Because if white does not play in his own territory, it seems that he gains one extra point by not putting down that last stone. While in Chinese rule, it does not mater if the white controlled point is stone or empty.

Also in Japanese rule, it seems one should be very cautious not to put stones inside one’s own territory as it decreases points. But in Chinese rule it does not matter if it’s stone or empty space as long as it’s inside one’s territory. This seems a big difference to me.

I understand although Go may be originated from ancient China, Japanese players really developed the game and was the dominating force in the past few hundred years. So I assume what we call “Japanese rule” was the rule officially used during that period of time. Although the so called “Chinese rule” seems more intuitive to me, I assume it was developed more recently.

I am trying to understand the difference and the aforementioned two questions are the ones that I cannot answer. They are very important to me because they affect how the points are calculated and therefore are fundamental. I certainly do not want to go into the trivia of the rules as I would like to focus on learning the game, not the rules.

Any advice would be highly appreciated. Thank you all.

I’m not well equipped to answer your second question of what the differences are between Japanese and Chinese scoring. I just know that I’ve done both and the score has been the same

Under J rules, it’s irrelevant who plays last, precisely because stones don’t affect the score. It would be silly for anyone to play unnecessary moves inside their own territory because it takes away a point. This is also the motivation behind the J rules treatment of “bent four” (no need to play it out, it’s dead by convention). If the attacking player had to play it out, he would have to reduce his own score.

Under C rules, stones do count as points, therefore any extra stone placed on “dame”, that is, intersections that do not count as territory for either player but border both players’ outlines, are worth a point. Conversely, stones inside players’ own territory don’t affect the score because despite taking away a point in territory, they add a point by virtue of adding a stone.

Assuming all dame are filled (which is also the custom under J rules, mind you!), it is virtually impossible to mess up scoring, that’s also why bots use C rules.

For a brief overview of the rules and links to more detailed treatments, I refer you to https://www.britgo.org/rules/compare.html .

Also in Japanese rule, it seems one should be very cautious not to put stones inside one’s own territory as it decreases points.

In Chinese rules it’s also important to not play inside of your territory because that stone could’ve gained you a point elsewhere.

Only if there are 2 seki on the board.

If black takes the last dame, that’s worth an extra point for area scoring, but nothing for territory scoring.

Please produce a game where there are:

I really want to see that.

Please produce a game where there are:

I really want to see that.

Here is a simple example on a 5x5 board:

The last three moves are numbered. There were no captures, seki, or ko in this game. Under territory scoring, it’s a tie (before komi). Under area scoring, it’s B+1 (before komi). So assuming a 0.5 komi (just for the sake of example), the two systems would decide the winner differently.

Had black decided to pass rather than play the last move, then white could take the last dame point, which makes no difference for territory scoring, but flips things into his favor for area scoring.

The above example is from here: https://senseis.xmp.net/?TerritoryAndAreaScoring

You clearly did not read my post. I reiterate with emphasis:

Sorry, I seem to have misunderstood what you wanted to see. I guess you are asking for a situation where both systems produce a one-point difference based on who takes the last dame.

In my earlier post, I was not claiming that, but rather just this:

That is, I’m saying that the two systems can disagree (by 1 point) for a particular game.

While often it is not the case, it is possible for the last dame to affect the score of the game under the Japanese system as well: 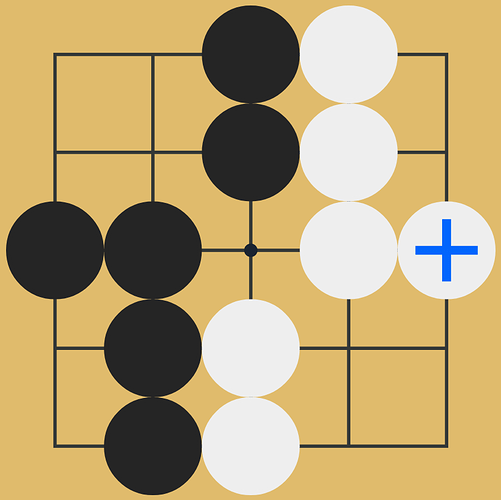 If black passes to allow white to take the last dame, it will cost him a point to reinforce.

Actually, maybe this is a better example: 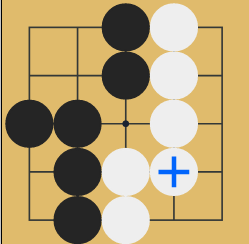 I’ll give you one more attempt before I tell you it’s impossible and that you simply stated a falsehood in your post in your attempt to “correct” my correct statement.

I’ll give you one more attempt before I tell you it’s impossible and that you simply stated a falsehood in your post in your attempt to “correct” my correct statement.

I feel from your tone that you may be taking personal offense to this discourse. I don’t mean to offend you or make this combative. I simply want to share knowledge in the hope that we may both mutually further our understanding and appreciation of the game.

I thought you wanted to see some examples, which I attempted to provide in order to share my knowledge. However, you seem to be quite confident that what I am saying is wrong and that I am not properly responding to your queries, so perhaps, I am the one that is confused.

I would really appreciate it if you would help clarify and correct my misunderstanding. I just want to learn more about the game and help others do so as well.

The difference between scores under J rules and C rules in this situation (x versus y takes last dame) is always 2, provided there are no (two) seki on the board.

Your statement is therefore wrong and producing diagrams displaying a difference of 1 point is impossible. You can still try if you want to…

As the one who posted the thread, I learned a lot just from reading the responses. I especially wanted to thank yebellz for posting the example from https://senseis.xmp.net/?TerritoryAndAreaScoring

It was an excellent example showing why I had my confusion: the two rules result in different winner. And as a beginner, I don’t understand which one is better and why there was such discrepancy in the first place. I would think a game that’s been matured from hundreds of, if not thousands of, years, should have reached a satisfying status regarding rules. (I like the game because it’s so precise, so logical and so satisfying in learning. It’s like a well developed physics theory where everything is perfectly consistent with each other)

While I enjoy more responses and explanation of the differences and reasons behind the two rules, I certainly hope this remains a friendly discussion, not an argument thread.

Thank you all for sharing.

Your statement is therefore wrong and producing diagrams displaying a difference of 1 point is impossible.

The discussion started when andysif (sort of correctly) stated that there could be a game whose result under J rules differs from the result under C rules by 1 point.

That is true, provided there are two seki on the board.

yebellz claimed I was wrong, that no seki were needed to produce a difference in scoring of 1 point and that “If black takes the last dame, that’s worth an extra point for area scoring, but nothing for territory scoring.”

Unbeknownst to him, this is impossible. If he tried, he would find out that the difference between cough

The discussion started when andysif (sort of correctly) stated that there could be a game whose result under J rules differs from the result under C rules by 1 point.

Here there is a 1 point difference.

That is true, provided there are two seki on the board.

There is no seki in above board, but there is still a one point difference.

So this is were I get confused. yebellz stated that there will be no difference if white take the last dame, but he didn’t claim they would score differently every time, just in some situations.

This discussion about a one point difference/one point swing is kind of pedantic and not related to the OP’s initial concern. But I respond anyway.
When is a dame not a dame? When one side needs it to make safe territory. 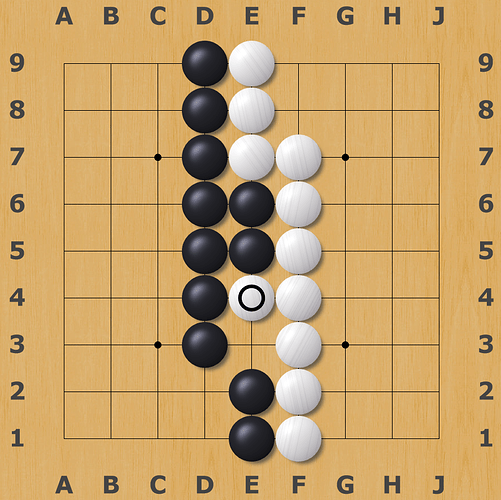 Here if black takes E3, black wins by one under Chinese but is a draw under Japanese.
If white takes E3, then black needs to connect with D2 for instance, and is a win for white by one under both rulesets.