In adding josekis to my series of Almost antique corner sequences I noticed that there are more than a few (actually several hundreds) of josekis in which one of the players plays a tenuki.

Here is an example: 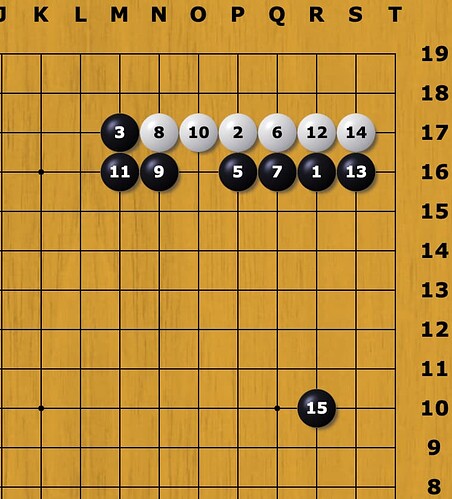 I know that these josekis are definitely before AI (and even before PC): they were published in 1966.
So I wondered: does this - playing tenuki in the middle of a joseki and therefore allowing the opponent the advantage of playing two successive moves locally - still happen nowadays?

Some other topics that deal with tenuki:

Dear Tenuki: I’ve been reflecting on our relationship, which for a long time could best be described as a nodding acquaintance and little more. Not once did I ever ask you to dance, nor did I talk much to you. I wouldn’t have you think I was blind to your considerable charms. For all that, you appeared to lack the assuredness of girls like Shimari or Keima, and I remember that made quite an impression on me. In my superficial view of things I had you pegged as the girl I could call on when …

Where to Tenuki? Teaching

I recently played a game that I later analyzed using Leela and I noticed something. This seems to be a trend in many of the games where I win. Whenever I Tenuki, Leela usually suggests that some other Tenuki move would have been a better choice. Now in most cases I do end up playing the position that Leela recommended, but a few moves late. The impression I’m getting is that I generally know where the important points of the game are, but I’m having difficulty gauging which point is most impor…

So I wondered: does this - playing tenuki in the middle of a joseki and therefore allowing the opponent the advantage of playing two successive moves locally - still happen nowadays?

Yes, the most prominent example is ignoring an approach to a 4-4.

Playing tenuki in joseki is one of the notable changes post AI. There are many new patterns with tenuki but this one stands out in my memory. Either White tenukis after Q14 or Black tenukis after any of the pincers at 1, 2, or 3.

The change in the 3-3 invasion is also simply a tenuki joseki now.

In this game Grand prix
Black tenukied 3 times on the lower right, then resumed the joseki but got the sequence wrong.

The graphic you showed there doesn’t really look like a Joseki, that really just looks like Black winning.