Hmm - it wasn’t supposed to make you nervous.

It is a picture of a parent pelican in the nest, with the youngling alonside, looking longingly up at the rest of the pelicans as they glide blissfully along high up under the street of aweome cumulus clouds.

For those that don’t know yet, this is a thing…

Is your feature request related to a problem? Please describe. Our local go club has recently started playing on OGS (because coronavirus)....

This is awesome news! I’m really curious to see what sorts of things Anoek will enable with these API changes.

Would be a useful feature for organizing tournaments. Right now it’s very hard to tell if everyone started their games. If all group games are on one page it would be very easy.

I think this would be a big advantage in our war against kgs.

Neat :) Ok I'm in the process of doing some server updates for both speed and adding capabilities like this. We'll have an API endpoint to return games for a particular group - anoek

would be a big advantage in our war against kgs

TBH, I dislike the idea of “war”, very much

And, as far as I can tell, OGS certainly is not fighting a war—OGS offers a service, and OGS strives to find the best way to combine what is wished for and what is feasible (given the resources).

As I see it, OGS is concerned with building a server and community that people like, that they enjoy being an active part of; we—I think I can speak for all here—wish that people enjoy interacting and co-operating with each other and the “environment” that OGS offers, OGS wants to make people happy here, not to make them unhappy anywhere else.
I imagine the planetary Go community as a garden where many plants can grow peacefully side by side. Some offer fruit, some offer scents, some offer medicine, some are beautiful. Some offer more that one thing—this doesn’t make others superfluous

OGS certainly is not fighting a war

here here! I was thinking of writing a similar sentiment, but I’m glad I didn’t! You wrote it far better than I would have

In the in game chat, when lots of people are watching I think this feature (some parts of it) seems to already be implemented for sorting users.

There’s two options for sorting, one is sort users alphabetically and the other is to sort users by ranking/rating.

Would it be possible to reuse some of that code and add a field for online/offline sorting?

(One similarity I suppose this has with the groups, is that the status of users is changing regularly, that is, which users are present in chat changes, similar to the way online status of players in a group would change.)

I guess people have already mentioned that friends lists have a toggle to show only online or online +offline friends too. 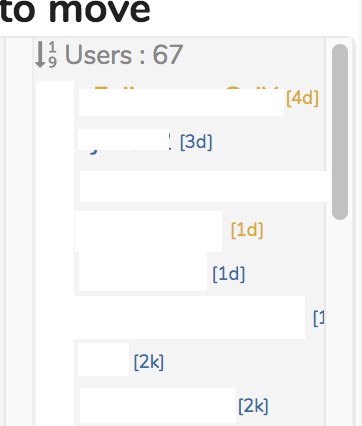 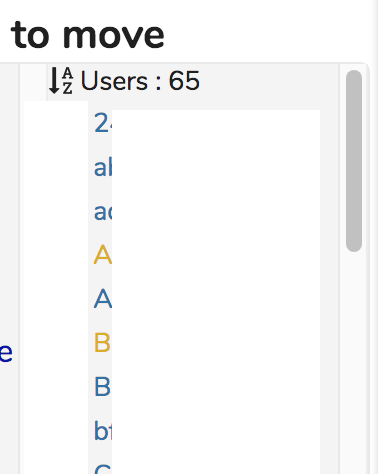 I just (tried to) cut out the names, so it doesn’t look like I’m singling out users in particular.

We get the list over different APIs. We get all chat participants at once (because there are few and changing fast). For the group members we get only the partial list you see, sorting the partial list would only be confusing.

Also, online status is not part of the group member request, but is asynchronous polled later (and updated when it changes). It’s possible, but not easy to sort the list using the status.

To sort the group members by online status without changing the backend/API is dirty.

We get all chat participants at once (because there are few)

I feel like when there’s over a hundred people watching a game eg https://online-go.com/game/23369034 , that could be even more people than some of the groups I’m in

. (I know there are groups with a good few hundred of players though.)

I appreciate the feedback though, even though it’s a bit over my head to provide suggestions at this level, I don’t know much about the api.

Maybe some of this will change if they do update the api?

Maybe some of this will change if they do update the api?