I was looking at previous posts (closed)

So I’m a member of several groups now, but from what I see the groups are dead-ish. There’s so few way to manage or promote activities in a group. I mean you have: A chat: not many people go to Chat, and when they do they rarely switch away from English room. A ladder: we already have site-wide ladder which is already a superset. Group notifications: nothing to do with us commoners. Group tournament: this one is good. Many group I’ve joined was created and very soon went dead. It doesn’t prov…

on sunday of Learn Go Week we have a group of players from Queensland and New South Wales congregating in the Australia group to play socially. is there a way to create games that only players in that group can see / kibitz on, the way rooms work in KGS? if not, are there plans to implement this / may i volunteer to do the coding and testing on it?

It was basically asked where do people play and what’s the best if you want to tell people there is/will be a game on if they want to watch etc.

Some of the plusses for OGS were you don’t have to be logged in to watch, you can just send a link directly to the game.

The minuses I believe were for scheduled live games - were it on kgs, you could just tell people the game will be at x o clock in the Ireland room and they can just see it appear (maybe it’s easier to kibitz? I haven’t tried). I think some other people found the layout a bit clunky on ogs/had trouble with conditional moves. Otherwise I’d say it was close with OGS/KGS.

So the Question is, while there is a group, is there a way to set up a game in the group? As in it’s easy for people to find the game, without say, having to know the usernames of the players when the game is already on/have someone link you it?

The short answer is no. Currently the best way to promote and locate a game is here on the forums. Start a thread specifically for the tournament advertising the dates and times of rounds, and then when the games start, post the game links in here.

External tournaments being either hosted or relayed on OGS is a very new thing, and one we weren’t previously set up to handle, and there is ongoing discussion on what would be the best way to accommodate these new use cases. It was a very pleasant surprise, but a surprise none the less.

For each group there’s a chat and you can put game link there. Also you can make a group announcement with links and it’ll be on the front page of the group. IF you want to use groups for that.

I am wondering though given a post from anoek (2014), if it is still considered as on the to do list.

FTR this feature has been planed since day one and all of the core stuff on the server already supports it, but we put off integrating it into the UI on the back burner until things got big enough to warrant the feature. There are a few groups that are big enough that it might actually get used now, and it’s come up a few times recently so we’ll likely get to it in the not too distant future.

It is nice to see the request for challenges by url, that might be a way to challenge people only in a specific group for instance, make a challenge and just share it in the group chat – https://github.com/online-go/online-go.com/issues/1023

Just had our first Covid19 virtual club meeting using OGS. Basically it is too hard
to get any interaction when you need to have the Home page and the Group page open all the time. Minimum requirements are:

Thanks for your feedback Neville, those are great suggestions.

For a bit of context for the rest of you, Neville is Vice President for the Australian Go Association Inc. and also runs the Canberra (Australia’s Capital City) Go Club. He is also the Oceania director for the International Go Federation.

Members who are on-line must be flagged on the group page, rather than. have to make the friends and go to the Home page

That was easier than expected. I created a PR on github. 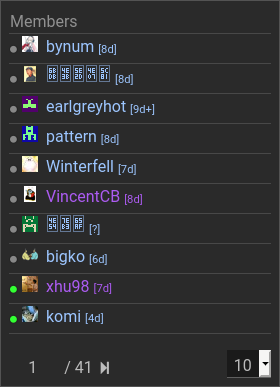 Quick question, how are the members lists sorted?

Are they sorted by random, by date joined, by rating?

Be nice to have the online people first maybe in a group? Might not be doable.

The new update is nice though.

That’s great! When will it be rolled out?

The next step is harder, but would make club interactivity possible:

@flovo, you rock!
Would you be able to either add a sort by online or a checkbox to show only online group members?

I think we already have that. This is from a group I am in: 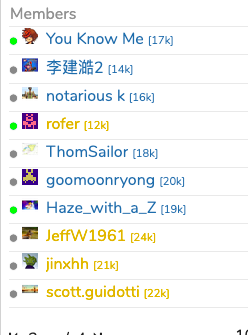 The green dot means the person is online and if the dot is gray then they are offline.

My request is to be able to sort by or only show online members. 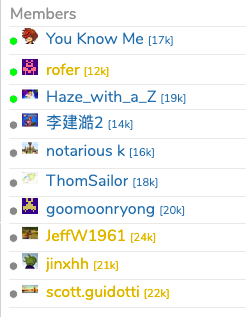 with all online members pushed to the top

Not only that, but also sortable for rank/name (while either including or excluding offline folks), if I understand correctly.

And … makes sense, IMHO. But no commit from me either. I can typeset, I can bend vectors and nudge pixels, but coding is a book with 7x7 seals for me. 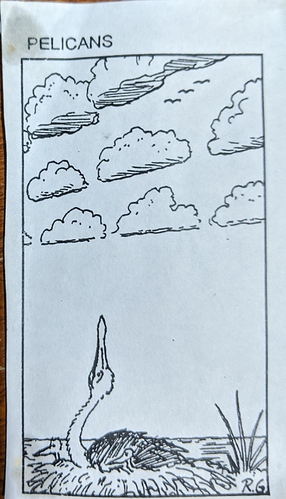 (This is a precious old copy that I have tacked to my desk of a comic from an Australian Gliding magazine. It might be that only a person who has been into gliding in Australia can fully appreciate, but maybe the sentiment translates somewhat…)