I’m not gonna comment anymore, “the perfect play”? How about casual play? As long as it’s fair its okay, but it is not.

It would be nice to have a filter-by-color option either on the profile or on gotstats.

By hand it just takes too long. Here’s the data I got from Adjar’s (ranked 9x9) game history: 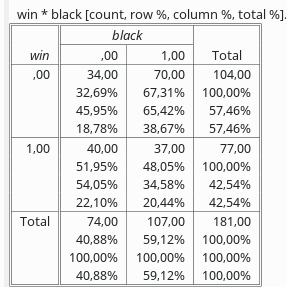 Now because PSPP is a little annoying to deal with, I couldn’t correct for rating difference yet. Before implementing komi change for anyone, I’d strongly advise to properly analyze a reasonably large random sample of game results to see if this isn’t just a matter of (availability) bias, confound (weaker player gets black) or something else.

For instance… if white was really so OP, why would Adjar only score ~54% winrate with white (versus his ~35% winrate with black)? Leads me to speculate that when white isn’t a much stronger player (slated to win anyway), it’s a psychological thing third variable at work.

Look like the way to go, I would trust more the pro community as anything else.

I’m not for a special komi for beginners either. It could look like a mountain for black but black holds it so you just need to stay fair or play with no komi to see what komi is about. In fact, I don’t see how a reduced komi would give a more fair game for beginners. Both are lacking a lot but both have their chance on their own (this famous beginner intuition…)

It is funny that this thread arised from a >4 year old OP and is still alive. In the game cited in the OP, black can get rid of all komi-related issues by killing the white corner in move 15.

Yes, all beginners could get rid of fairness concerns by gittin gud.

My nines account has a higher win rate with black than with white: http://avavt.github.io/g0tStats/#/user/Base9x9. Obviously, this means that komi is too low and should be moved up to 7.5.

Yeah it is difficult to compare especially with spaceman aka Ohashi Hirofumi.

I don’t see any need to change the default komi, because players already have the ability to set a custom komi if they wish, and many do so, setting it at 3.5. Alternatively, they can play white if they think it is advantageous.

O that’s interesting indeed. How many?

In fact, 3.5 was the recommended komi according to Go Seigen and Miyamoto Naoki. On the basis of 2 games, but ah well.

I played through those games last year. I think they are somewhere in Sensei’s Library. But I seem to recall the suggested komi was 4.5. Perhaps the person who posted it got it wrong. Or perhaps my recall is faulty.

Since 1.8% is all that matters, it can be used all odd-numbered squared dimensions.

Just to show that there is no correlation between the size of the komi and the size of the board (and that the OP’s calculation doesn’t make sense):
komi on 7x7 is ~9.
komi on 5x5 is ~25.

Because there’s no consensus, 9*9 could be best place to organise the “betting” komi.
First player propose a komi value, second chose the colour he wants to play with.
I mean to implement it as a procedure to start a game.

First player propose a komi value, second chose the colour he wants to play with.

I grew up knowing this as the ‘cake’ system. First person cut the cake, second person choose her slice.

An alternative that could work well on line is for both players to simultaneous nominate a komi. The one that nominates higher gets Black. If both nominate the same, then random.