The reprieve that is offered to people who timeout of ladders seems unfair.

online-go/online-go.com - Timing out in a Ladder

This does not seem fair, and is particularly frustrating in the 19 x 19 ladder where games can take months.

If there isn’t a way to make the reprieve fair for everyone it would be better to withdraw it.

I look forward to your comments.

Yeah, seems unfair. Winner of timed out game should promote to above the timer-outerer before they are dropped out of the ladder.

That is what happens. I think the unfairness is that if you are the second opponent of a timeouterer (great word btw). Then you don’t move up as the timeouterer dropped from the ladder after their first time out.

To be clear, the timed out person doesn’t get to go higher in the ladder until well after the time out (in other words they have to win another, unrelated, game to get there)

Personally I don’t see that as unfair. I could live with or without the reprieve though.

(Some names: Timmy timed out again Bob, Timmy is still playing Alice)
To be clear, this only happens in the case of Timmy having been above Alice in the ladder, and Alice then winning and not going up to where Timmy used to be. If Timmy was below Alice before he timed out, then Alice winning wouldn’t make her go up the ladder anyway.

I’d agree this is unfair, Alice could end up wanting Timmy to not resign against her yet until he beats some other person in the ladder to promote up, and then you can go up to where he is now.

Yeah, that’s exactly what I’m talking about. Good point about it only being unfair to the challengers of the person who timed out.

Here is a real life example. 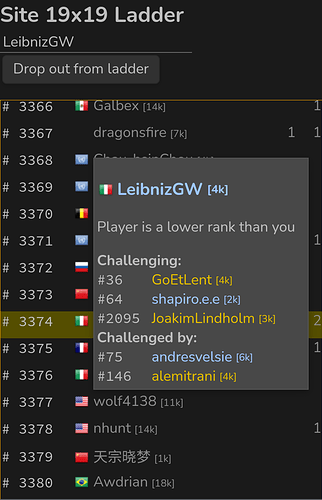 This person has 2 games in which if they win, they jump thousands of places up the ladder but if their opponents win, they don’t get the promotion they deserve. 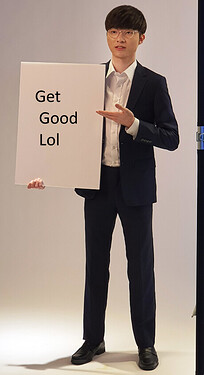 What if you don’t have a spare slot but do have one being clogged up by a timeouterer? Would it help to be allowed to unchallenge someone in the circumstance? It would be equivalent to resigning and the game being annulled I suppose.

Then challenge three people above. That’s what I used to do to climb. Then I one day I lost interest and dropped out.

I think in some cases leniency would be good, but a lot of timeouts happen for players that are not active at all. In that case, I’d prefer they drop from the ladder as soon as it happens, rather than waste time for two or more challengers. That scenario is more relevant at the bottom of the ladder where you’re less likely to be challenged.

Correspondence time settings are not strenuous and people have 30 days of vacation time. I agree that more leniency is not the answer.

The simplest solutions would be to eliminate the reprieve, or to stop dropping people for timing out - they would gradually slide down the ladder due to inactivity anyway.

Here is another idea: why not make people ineligible to recieve challenges until they challenge someone? That way inactive players would not waste other people’s time and would gradually drop out.

Maybe there should be “Get Strong at Timeout” with chapters on:

And, of course, let’s not forget:

Here is a real life example.

Looks like you are upset because someone took off something you deserved.

But it isn’t actually so, is it?
Were you sure to beat that guy and take his place?

Then he did timeout in another game. This isn’t a shame, is it? Timeout can happen. The kick off rule was meant to remove inactive players from the ladder, but he isn’t inactive: he joined again and made new challenges.
So why should we punish him?

Are you sad because you lost an opportunity?
Don’t want to waste your time?
Well, just resign then: you’ll have your slot immediately available.
He’ll be back up in the ladder, but he already was.

I think the big issue here is the will to punish timeout.

And get a warning for sandbagging? I mean I suppose the have would get annulled do that’s all good but resigning a winning position is frowned upon at best right?

I didn’t check the game. Is it already decided?

I think that within the ladder it’s legit to resign a useless game.
If one plays for the fun of playing, he should be happy to complete the game whatever the result is. But here we are complaining because the chance of rising vanished and it takes time to complete a game. So resigning seems a good solution.
I don’t think there will be official warnings for that.

But there’s also another possibility: if the outcome is clear, let’s just drag this game until the opponent wins his other games.

I really don’t like this kind of ladder strategies, but it seems legit too.

I don’t think there will be official warnings for that.

Maybe you are right but we know from a previous discussion that there is sensitivity about ranked games finishing “wrongly” and affecting the ranking system.

drag this game until the opponent wins his other games.

I guess this is possible but not always. And a sad side effect of the rules I think.

Wouldn’t it be better if when someone times out of a ladder all their remaining challengers move to the timeouterer’s spot (in challenge order) and those games become normal games.

I don’t think it’s too harsh to be ejected from a ladder and have to start at the bottom again. You can climb big chunks of a ladder easily enough at the beginning anyway without the need for this “reprieve”

all their remaining challengers move to the timeouterer’s spot

I don’t see a reason for that. They didn’t beat him, they don’t deserve his place.

I don’t think timeout deserves a punishment. We could just do nothing against timeout in a ladder.
The winner takes his new place and it’s all.

The only reason for kicking off people is because they don’t actually play at all. There are a lot of players who subscribed the ladder, played for a while and then forgot about it or simply stopped playing but didn’t drop off.
This is an issue because they remain in their place forever. They will take years to slowly fall down naturally. In that time many other players could challenge them just to find out they didn’t get an actual game.

We can’t check constantly thousands of players for their activity so the check is left to challenges: if the challenged is inactive he will be kicked off, thus cleaning the ladder.

The so called reprieve is just because there’s no will to punish timeout in itself. Otherwise all games by the timeouterer should be forfeited and what you said would happen.
But that isn’t the intention.

Well, it’s quite harsh if you don’t deserve it!

I did that intentionally a couple times just because I was bored of lying on the same ranking, being unable to climb further.
It can even be funny and challenging if it’s your decision.
But if you just lose a game because you had unexpected problems irl, it doesn’t seem fair to be punished like that.

or to stop dropping people for timing out -

please no, we just got that fixed

Half the people in the middle of the ladder are probably inactive.

There are a lot of players who subscribed the ladder, played for a while and then forgot about it or simply stopped playing but didn’t drop off.
This is an issue because they remain in their place forever. They will take years to slowly fall down naturally. In that time many other players could challenge them just to find out they didn’t get an actual game.

I think the last challenge I had ended last month, somebody challenging me, but I probably haven’t challenged in longer than that. I’d still play if challenged.

I might go back to clearing out inactive players if I’ve time. I might wait till more of my correspondence games end.

This does not seem fair, and is particularly frustrating in the 19 x 19 ladder where games can take months.

In terms of the OP, what about just promoting the winner to the position of the challenger when the game was started in some way.

It’s very tricky to implement in general because people are jumping over each other all the time and moving up and down, but maybe there can be an invisible flag to say this person timed out in the ladder --> change the behaviour of their current ladder games as of the timeout that dropped them out?

Looks like you are upset because someone took off something you deserved.

I’m not really upset, just mildly frustrated, it’s like when you buy something and it doesn’t do what it is supposed to do.

I had understood that a ladder was a fun place to play where if you challenge someone and win, you go up the ladder. It should be simple. So finding out that it isn’t simple and in some cases it isn’t even fair is disappointing. That’s all.

I enjoy my games regardless of the ladder mechanics, I’m not going to resign or drop out because of this. It is tempting to engage in the timing shenanigans you mention, it had occurred to me, but I suspect it would be even more annoying than the original issue.

Thanks for your comments.