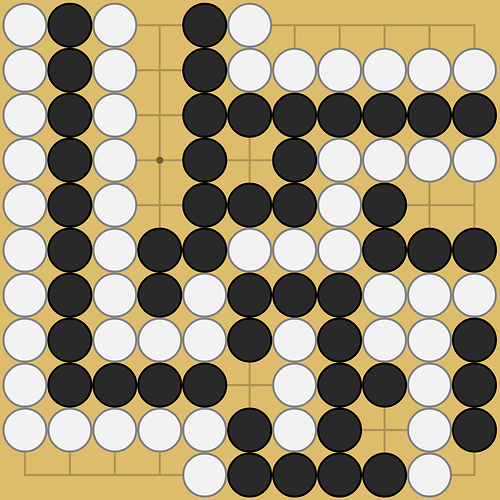 It’s quite fun to read out this problem, so don’t scroll down to the discussion below until you want to see the analysis that gives it away.

top right and bottom left are unconditionally alive for white, I believe everything else is seki

edit: whether it is black to play or white to play will determine the L&D of the two sticks on the left

edit2: actually black to play or white to play determines L&D of all the other groups apart from 2 corners

The position is attributed to Harry Fearnley. However, I did not find it on his website. It appears at the bottom of this Sensei’s library page: https://senseis.xmp.net/?Hanezeki

Whoever plays at 6-3 first kills pretty much everything and wins.

I’ve tried to upload my analysis SGF to OGS, but the file seems to be causing a bug in the OGS system. I’ll start a different thread to discuss that bug.

before looking at your sgf, this is what I read out https://online-go.com/demo/view/424388

Yeah, @yebellz’s analysis is not completely correct but the idea is right, of course, otherwise the position wouldn’t be in senseis’ library. It’s interesting to figure out why this is seki. In my head I saw why white might not wanna take it but I was surprised that black can’t do anything either.

My analysis also shows some mistakes/pitfalls. However, the point is to actually show that ANY move is from the initial position is a mistake, i.e., the position is a seki since any move by either player leads to a worse outcome, with any attempts to salvage being futile.

@BHydden Why would black play F3 in answer to white G3?

I misread that part… I thought black needed that for seki and would die if white connected to his main group, I missed that black had enough liberties to kill white’s corner first

After black F3, black can capture the white group at C11. It’s one eye vs no eyes. What could white do to avoid that?

White wins the capture race by capturing B11.

I can’t see it 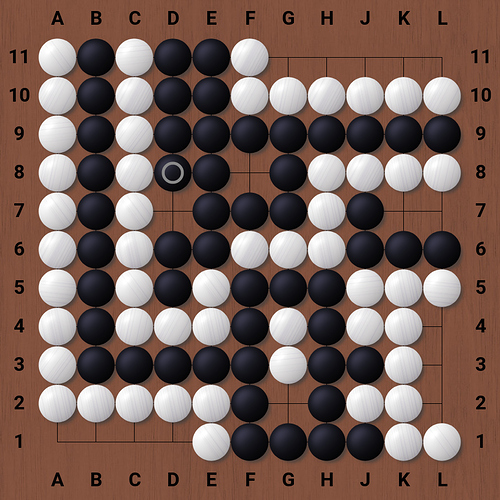 Another interesting wrinkle is the position with the five dame at the top, and whether one should try to reduce those liberties first.

My analysis file covers these complications, and it also shows some mistakes alongside futile defenses. The whole point is that whoever moves first puts themselves at a disadvantage (unless their opponent makes a subsequent mistake).

I think you have dismissed my analysis too hastily. Please check it again carefully and keep in mind that some variations some mistaken refutations, but that each main branch shows how the player originally moving first is punished.

Sorry, it might be a bit confusing since I did not include comments to discuss each branch, but I think it can be worked out from context. I’ll post again later with more detailed analysis.

I may need to use a different software. Normally gowrite 2 is excellent for reviews but in this case I’ll admit the branches were a little hard to follow. Sorry if I judged your work too quickly.

Some SGF software has bugs or quirks. My SGF file is valid according to the standard, but already I’ve seen that some software (e.g., the OGS SGF viewer) behaves weirdly with it. This may be due to the atypical nature in which it is composed, namely, I show multiple variations starting from the root node but with some with black playing the first move and others with white playing the first move.

For reference, I used my own software BesoGo to compose the file.

I added refutation in your review to show why your “black plays first” variation does not work.

@yebellz’s analysis is not completely correct

What in particular is in error? Note that one of my variations are to show an erroneous refutation by black (i.e., black makes a mistake after white makes the mistake of playing first).

Perhaps my plain SGF file was a bit unclear. In the next post, I will go through the variations in detail. Please let me know where the errors are.

Here is the initial position again, but with some markup for discussion: 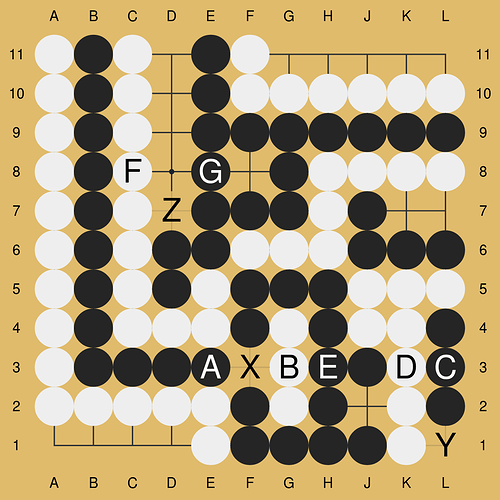 Perhaps the most striking feature of this position is that black has a 12-stone chain, marked with A, in atari. This would make it seem that playing at X would be a high priority for either player, in order to capture or save those stones. The chains marked with B and C are also in atari, with B also depending on a potential play at X, and C is capturable by White with a play at Y. The life and death status of the chains D and E, as well as much of the rest of board, also depends on the status of these stones.

Another interesting feature is the position of the chains F and G, neither of which has two eyes, but G seems to have an advantage from having one eye, while F does not have an eye. However, clearly the status of chain A affects the balance between F and G. They share five liberties around Z, and this specific number will matter, as we will see in the analysis.

Overall, the position seems to appear unstable, with strings in atari and possible temporary sekis, but they seem to depend upon each other in a circular fashion. In fact, this position was called a “circular hanezeki”.

Hanezeki is a surprising type where stones can be atari, yet actually capturing initiates a sequence that puts the first to play at a disadvantage. This particular position adds further complications to this concept by arranging multiple chains in a circular dependency. The example hanezeki on the Sensei’s Library page is much simpler and helps clarify that core concept.

If Black plays first at X, then White must answer at G3. From there, black could try two tactics. if Black attacks White’s D chain, then Black will actually lose a capturing race: 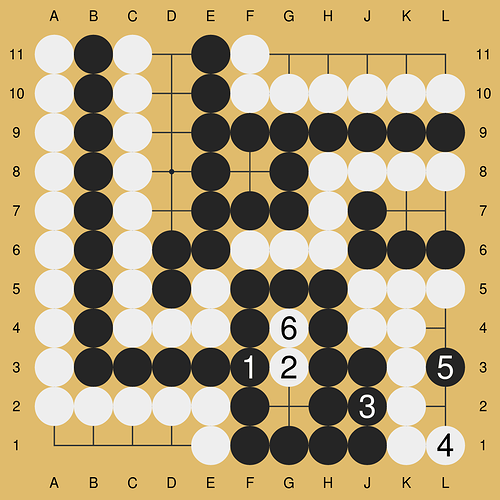 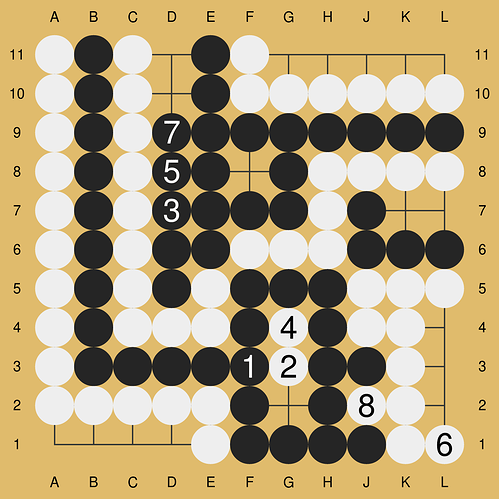 White could play at X to capture the 12-stone Black chain A: 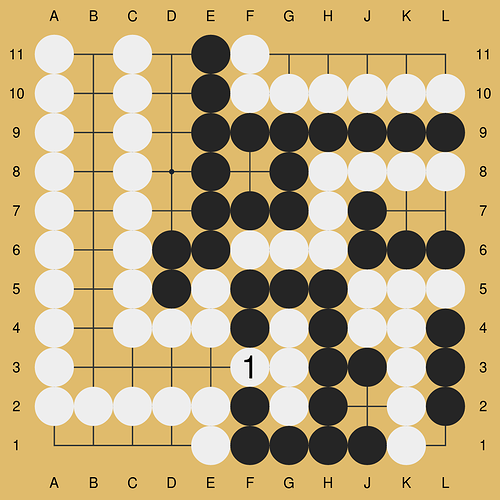 Black is compelled to play the snapback at E3 and white must play G3: 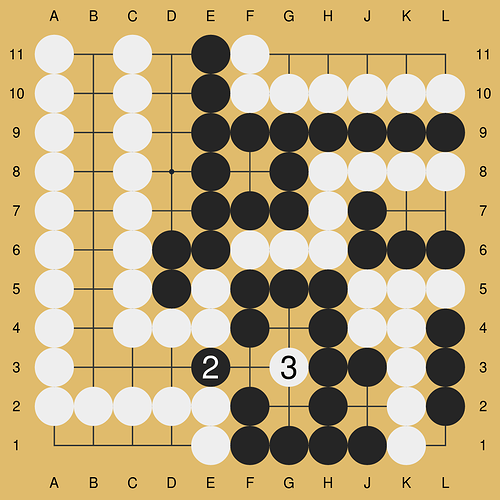 However, from that position, White is doomed to lose the capturing race: 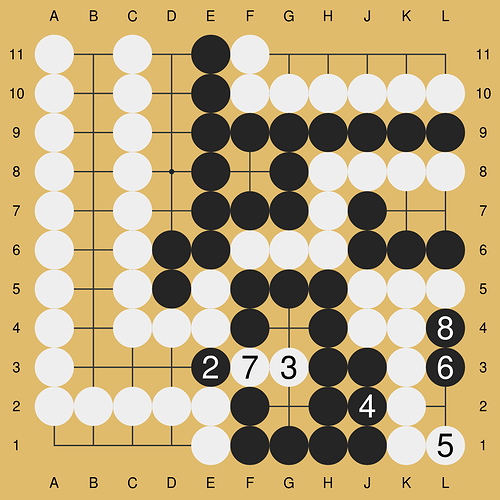 Hence, White playing at X also does not work

The next three figures shows how a mistake by Black (playing 4 at F3 instead of J2) would play out: 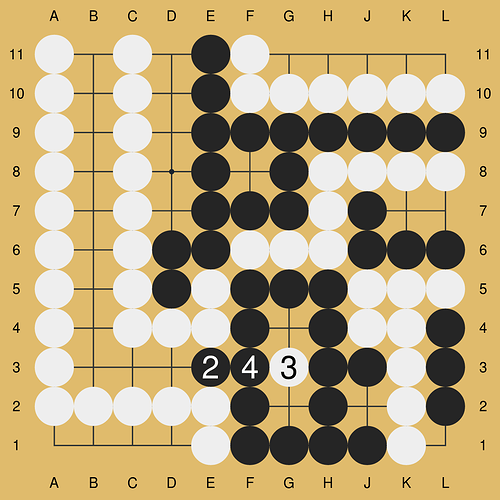 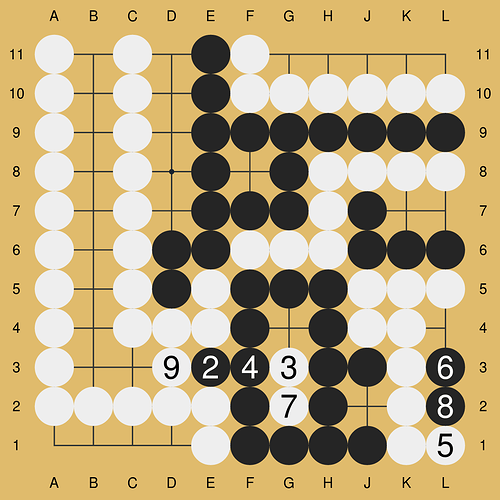 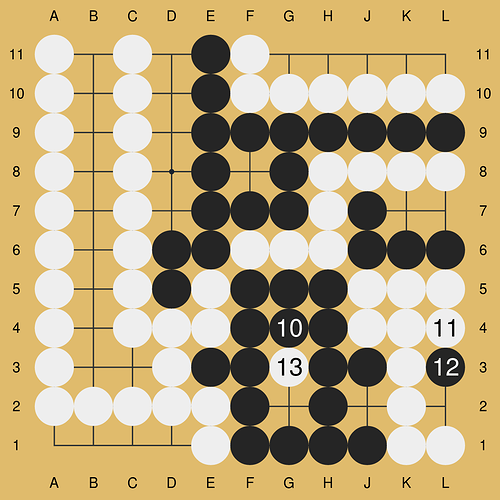 A local (but temporary) seki is established in the bottom right, however, this it will eventually collapse and all of Black’s stones will ultimately be captured by White, since Black’s G chain and then stones at J6 are capturable. 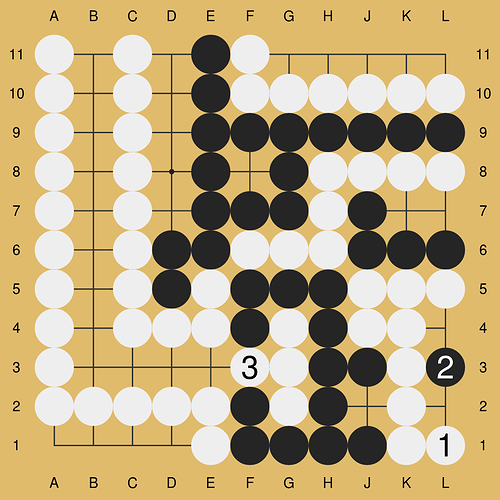 However, this also leads to a capturing race that White will lose: 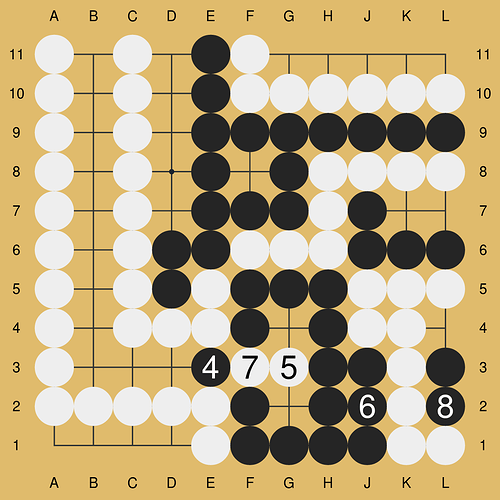 Hence, White playing at Y also does not work

Earlier we saw the five liberties around Z prevented Black from saving chain E by first capturing White’s chain F. However, if Black attempts to first reduce liberties around Z, White can then play at X and capitalize on the reduced liberty count: 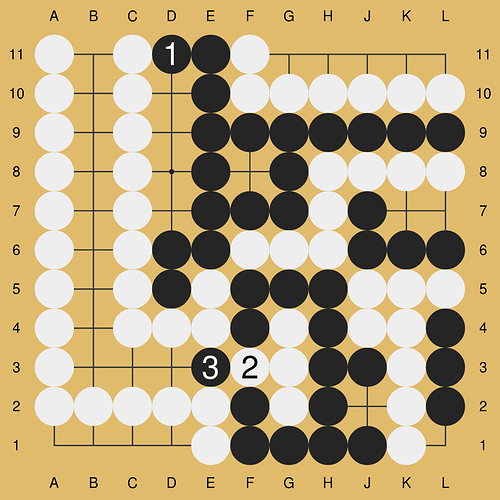 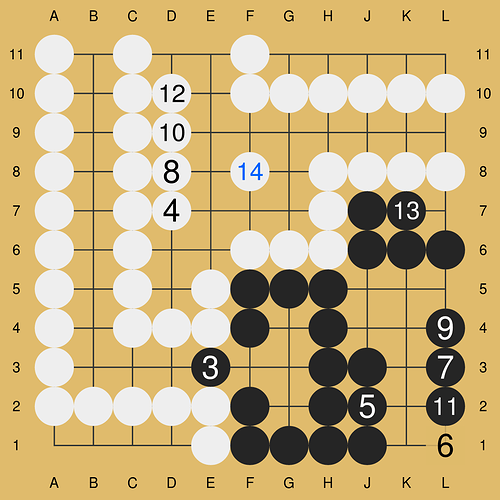 The net result is that White has gained far more points than Black in the exchange.

Hence, Black filling around Z leads to a worse outcome

For completeness, we can also consider what might happen if White initiates play by filling a liberty around Z. However, that will allow Black to play next at X: 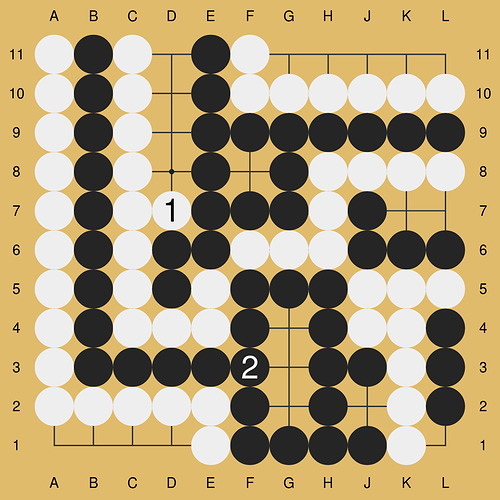 This now works since Black can win the capturing race by attacking White’s F chain to save the Black’s A and E chains: 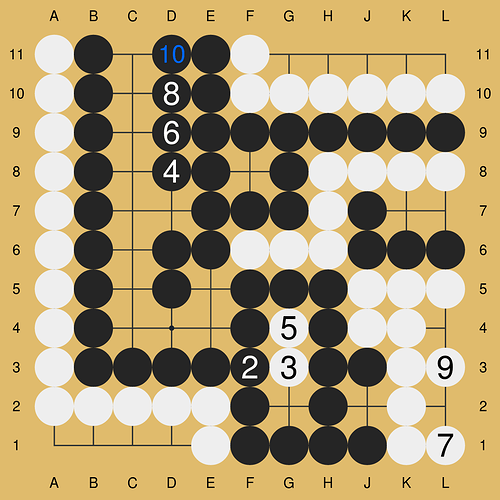 Hence, White filling a liberty at Z does not work

All of the potential plays analyzed above lead to a much worse outcome for the player initiating the play. Hence, all of the stones are alive, with all (besides White’s top-right and bottom-left corners) being alive in a bizarre type of seki, known as hanezeki.