Hi. Where can I view a list of players I have blocked? Thanks.

Hello, there is unfortunately no such feature at the moment, sorry

I’m kinda curious. Why do you care who you have blocked?

I’m kinda curious. Why do you care who you have blocked?

For example, if you blocked a player in a temper, and then, after thinking, you decided to unblock him.

In that case the player would probably be in your game list. Just click all the names of your opponents and uncheck the checked box. If you blocked some guy in chat, unless it was a throwaway account, that guy’s probably in chat all day. Go through the list etc.

Why do I care? Just curiosity. I also play on KGS and, due to some kind of bug, my list of blocked users there disappeared. But at least I could see the list and knew to restore people to the list. How will I ever know if the blocked list in OGS is working correctly or not?

That’s a great idea, GuardAngel. I think I’ll start keeping a list. Thanks.

On KGS I sometimes temporarily block a player I’ve been paired with too often. I like being exposed to different styles. For the same reason I typically want to unblock them after a while. So from my perspective this is a pretty reasonable request. And surely not hard to implement.

I have never used api but I was able to decipher your link so here is a:

Which includes little ‘packets’ of information in three line groups.

The bottom of the three lines is the person’s user number. To find out who they are, go to your (or any) profile page and then replace your user number with their number in the address bar at the top (and press enter).

Now click on their name and click on ‘Block’ in the popup menu to view or alter their blocked status.

Nb. as flovo said, the list of blocked people includes anyone you have ever blocked. If you unblock them they remain on the list with ‘false’ next to both options (as with my example).

Thanks again @flovo. Please correct any errors in my post or let me know so I may do so.

This feature is now available in the UI. 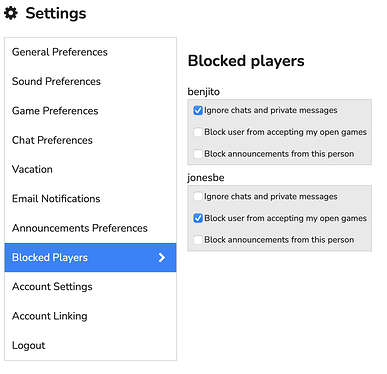